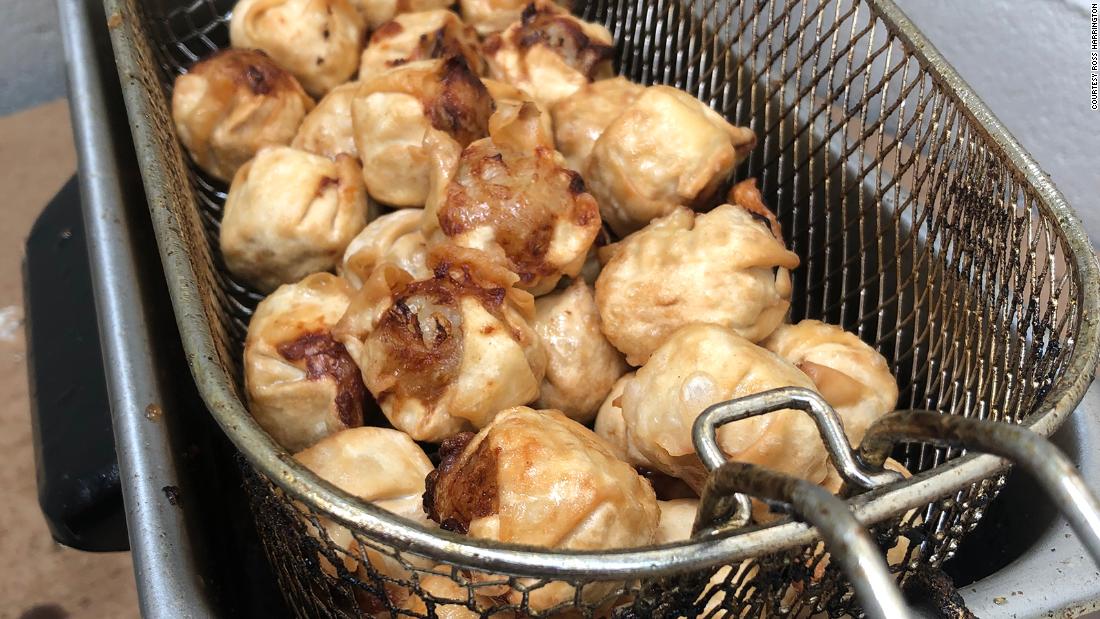 (CNN) — Every Friday, Ross Harrington, a car dealership service manager in Melbourne, heads to a local lunch shop to pick up a couple of deep-fried dim sims, kicking off his weekend dim sim routine.

Harrington is the founder of Dim Sims 4 Lyfe, a Facebook community made up of about 5,000 dim sim enthusiasts who share their experiences and innovative recipes — dim sims on pizza, for example.

They aren’t alone in their obsession.

Dim sims, or “dimmies,” are a variant of the traditional Chinese dumpling. Served in a variety of ways, including steamed and fried, they first gained popularity in the 1940s and have since become an iconic dish in Melbourne and beyond.

So who invented them? Turns out it’s complicated.

“It’s often been erroneously recorded that he invented the dim sim and had a restaurant called Wing Lee. He did not invent the dim sim,” says the 90-year-old celebrity chef.

“But yes, if it weren’t for my father dim sim wouldn’t be what it is. It wouldn’t be an Australian fast-food icon.”

The origins of dim sim

Australia’s dim sim story began in 1942, when Chen realized that a number of elderly Chinese men who had come to Australia to work during the gold rush of the 1800s were left jobless.

“They were like the leftovers from the goldfields days. They didn’t make it back home to China and were too old for heavy works,” says Chong.

At the same time, Chen noticed how popular Cantonese dim sum had become in Australia. (“Dim sum” refers to the whole collection of dumplings and delicacies served with tea. Among the many dim sum dishes, siu mai — a flowerpot-shaped pork and prawn dumpling — was especially popular.)

Dim sims, which come in many shapes and sizes, are usually fried or steamed.

Chen came up with an idea: If he could mass produce siu mai, these men could sell them on food trucks and earn a living.

But siu mai was too much of a mouthful for Australians to pronounce back in the 1940s. Chen called it “dim sim” instead — which has the same meaning as dim sum, but in a different Canton dialect.

“So he kind of combined philanthropy with the business,” adds Chong. “They started with four women making them by hand — my mother was one of them. Then the popularity grew and we started to employ more and more ladies.”

Chen called the business Wing Lee — Wing was his middle name and Lee was his wife’s maiden name.

But the hearty dumplings weren’t propelled into stardom until his son stepped in, albeit accidentally.

A day of slacking launches dim sim to the masses

“At that time, my eldest brother Tom checked into the business. My father asked Tom to deliver a box of dim sims to an elderly Chinese gentleman who lived in Cheltenham (a Melbourne suburb),” says Chong.

“While my brother was on his way to deliver them, he decided it was such a fine day, he’d stop and say hello to his good friend Joe, a Greek guy who owned a fish and chip shop near the Mordialloc area.”

The two friends ended up going fishing. Chong says when they got back, Tom told Joe, “I’ve got a box of these dim sims. If you like, I’ll cook them in your shop and you can have them for lunch.”

Ross Harrington, founder of a Facebook community dedicated to dim sims, says he eats them every weekend.

Joe decided to deep fry them, as “that’s the only way you could (cook them) in a fish and chip shop,” says Chong.

Joe said they were wonderful so Tom, instead of continuing with the delivery, left the box of dim sims there.

“Before the next day was over, Joe rung Tom at Wing Lee and said every one of his mates were asking where he got these dim sims,” says Chong.

As their popularity increased, the factory couldn’t keep up with demand.

So Chen engaged a German engineer to design the first ever dim sim machine to churn out these delights by the thousands.

“I was a little girl then,” recalls Chong. “I remember my father talking into late nights with the engineer about how he wanted the pastry done and how the machine should churn all the ingredients.”

The results were an immediate hit, she says, making Wing Lee Dim Sim the first Chinese factory to commercialize a fast food for the masses.

Though similar, dim sim isn’t the same as the siu mai you would normally find in a Chinese restaurant.

Dim sims are bigger. They have thicker skin to withstand freezing and delivery. The ingredients also differ.

“It was during World War II when meat was scarce. As my father was supplying the munition factory with dim sims for lunch, he was granted a few more food coupons. But it was only a limited amount so he had to change the recipe,” says Chong.

“I think the meats he used were pork and veal. He had to fill up with more vegetables, like celery and English cabbages. We didn’t have Chinese cabbages. And a bit of onion for flavors. It’s still delicious.”

“At one time, a lot of young Australians traveled to London. We used to get letters back at Wing Lee that said, ‘Please can you send us some dim sims?’ So I think the dim sims — which means ‘to touch the heart’ in Chinese, really did touch the hearts of the Australians.

“It’s an Aussie thing now. People would buy fish and chips and have a dozen fried dim sims, too,” says Chong.

‘It’s a part of Australian history’

Harrington, 52, says he had his first taste of dim sim when he was 10 years old. For him, it was an acquired taste.

“I wanted to see what all the fuss was about. It was steamed and loaded with soy sauce; I didn’t like it. I persevered and eventually grew to love them,” Harrington tells CNN Travel.

“As you get older, things that you grew up with either disappear or become unattainable. Dim sims haven’t changed and eating them as an adult brings back fond childhood memories. Everyone has a story of where they get their favorite dim sim from.”

With that in mind, he started the Dim Sims 4 Lyfe Facebook group.

Dim sims on the barbie? Why not.

“Through Dim Sims 4 Lyfe, I have experienced a lot of good dim sims through recommendations from other group members. More importantly, I have brought a lot of people together from all walks of life, to celebrate something so simple yet something that means a lot to so many.

“I feel that if I can maintain the popularity of the dim sim, then I can help to ensure that some of these original Chinese restaurants can remain in business and as new generations take over it will give them a reason to keep them going. They need to be preserved as part of our Australian history,” says Harrington.

Harrington’s favorite dim sim memory took place about 30 years ago, when his wife took him to the South Melbourne Market to try their famous dim sims.

“They were big and peppery. I stood in line behind about 30 people to get my order and it was worth the wait,” he recalls.

These days, after a dim sim lunch on Friday, or “Fryday” as Harrington calls it, he will also have dim sims at the football matches during the weekends. He says he sometimes makes his own dim sims with “premium ingredients to perfect the ultimate taste.”

“The dim sim is definitely an iconic Australian dish,” he says. “The dim sim reminds Australia that we have always been a country that welcomes others and isn’t afraid to adopt new cultures and cuisines.”

What happened to the original dim sim company?

Elizabeth Chong was awarded the Queen’s Birthday Honour medal in 2019 for her services to Australia’s hospitality sector.

Chen’s company, Wing Lee, failed to achieve the longevity of the Australian dumpling he created. After he retired in the late 1950s, the company was put on the stock market and taken over by two other brands, Marathon and Chien Wah.

Shops and factories — big and small — have since created their own versions of dim sims.

But over the years Chong and her family have continued to impact the Australian food scene in other ways.

She started a Chinese cooking school in the 1950s, first as a small class for neighbors. She has since taught more than 35,000 students.

Then she was a popular Chinese food show presenter in the 1990s and 2000s, one of the very first Asian faces to promote Chinese cuisines on television. in 2019, she received the Queen’s Birthday Order of Australia award for her services to the hospitality sector and promotion of Chinese cuisine.

“There is a Chinese restaurant in almost every corner of Australia. Although Chinese food is always loved, it is not always understood. I put a different face on it and showed people that Chinese food was much more than just something to fill the stomach,” says Chong.

Top image: A basket of dim sims, straight out of the deep fryer. Credit: Ross Harrington