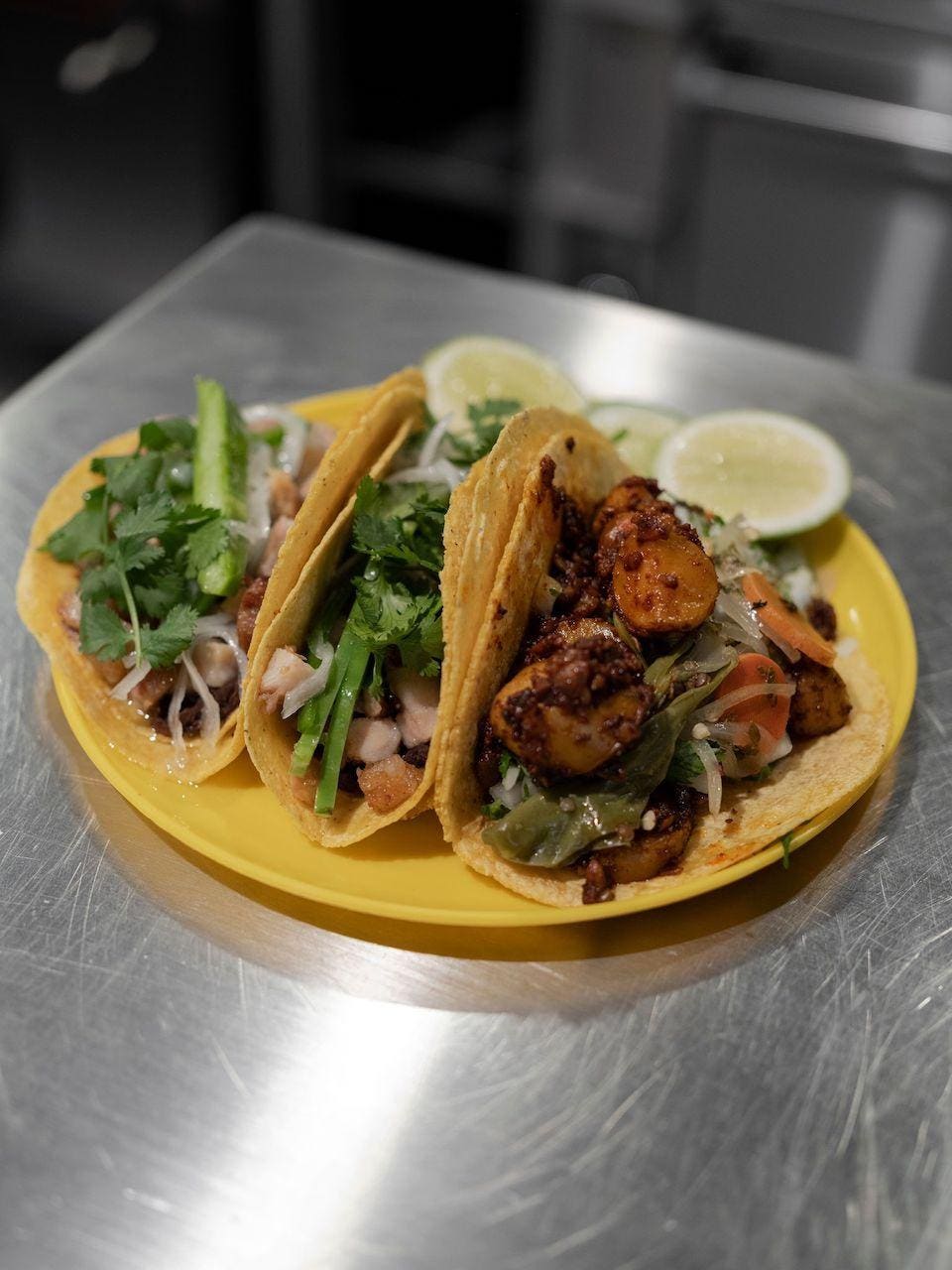 Speaking with Enrique Olvera is always an exercise in humility. With an acclaimed collection of restaurants that includes Pujol in Mexico City, Cosme in New York, and Damian in Los Angeles, he is among Mexico’s most celebrated chefs, and yet you need to coax him to open up about his work. In conversation, he is economical with his words and free of the usual flash and drama we’ve come to expect in an era of culinary superstars.

Clearly he saves his energy for the kitchen. Dining at an Olvera restaurant upends whatever preconception you had about Mexican cuisine, while also reminding you how delicious those flavors are. His handmade tortillas use fancy blue heirloom corn and yet taste like the countryside of Oaxaca (Olvera once guided me through that part of Mexico with his detailed recommendations). His mole has the complexity of a sauce that’s been roasting a hundred years.

It was Olvera’s tacos that helped get me through the pandemic this past year. After his DTLA Arts District restaurant Damian opened last October and then closed again because of safety protocols, he and his inventive head chef, Jesús “Chuy” Cervantes (who cooked at Cosme and finds his true expression here), opened Ditroit in a concrete courtyard behind the restaurant. The tacos and other street-food-style dishes that came through the window—carnitas cut from a spit, fish flautas, cauliflower al pibil— were better than just about anything like it I’ve ever had in L.A. The experience briefly breathed a sense of delicious freedom into lockdown life.

Damian takes everything a few levels higher. Inside architect Alonso de Garay’s brutalist-chic space in a former warehouse across from Bestia, the dishes are as soulful and surprising as the surroundings. You can get Oaxacan tlayuda in many places around L.A. but Damian’s version is a celebration of seasonal freshness, with zucchini blossoms sprinkled with queso fresco over a discus-sized shrimp shell. A Zarandeado-style grilled whole fish comes with tortillas, limes and onions, but also kimchi. We’re not far from Koreatown, after all. For dessert, there’s a blueberry tamal paired with flavors of burnt corn and vanilla. Think: Mexico City by way of the Hollywood Farmer’s Market.

I spoke to Olvera recently about his new ventures, his favorite L.A. dining spots and why he likes L.A.’s food scene. As usual, he kept things concise and made me hungry for more of his delicious food.

You have restaurants in Mexico City and elsewhere in Mexico, New York City, and now Los Angeles. What’s different about L.A.?

Enrique Olvera: I always say that our last opening is this sum of all the experiences that we’ve collected from the other restaurants. So you can see certain things from Cosme, you’ll see certain things from Pujol. But we’re the context of Los Angeles so we wanted a restaurant that was very calm and laid back. We’re part of the arts district, so that has an influence on the aesthetics of the restaurant. The murals that we have in the back are a nod to the beautiful murals that are in the area. Mainly, it’s about the love of California, and the love of L.A. You have so many different influences and most of that comes from the year-round produce and what’s available in the market, but also the people. I really love the easy-going nature of people in L.A. and wanted to capture that.

Opening a restaurant in a pandemic could not have been easy.

Well, restaurants are always a challenge, and this year and a half has proven to be extremely challenging, but fortunately we were able to adapt. Overall we’ve had a successful opening at Damian, even though we had to open with limited capacity in the beginning. Chef Chuy has done a fantastic job at a difficult time making this an exceptional experience, and we were even a little ahead of schedule: We were able to open Ditroit a little faster than expected, and that did very well.

Ah, Ditroit. The taqueria is so delicious. What’s the idea behind that part of the restaurant?

The space showed us the possibility of how we could be part of the neighborhood. We have that little back alley, which was a beautiful part of the project. I also think the prices are a lot more democratic, so we’re able to integrate a younger crowd, and people that live in the area, especially for lunch. It’s also our first proper taqueria. We’ve served tacos at restaurants before, but never exclusively like this, and we’re happy with the results.

L.A. has a lot of tacos. Yet these are somehow above and beyond.

I appreciate that. We put the same focus on execution that we do with all our restaurants, and again, I give credit here to Chef Chuy. Our tacos at Ditroit use the same ingredients as Damien—pork belly, the vegetables, the other meats. Like at all taquerias, we’re also focusing a lot on our salsa. In Mexico, they say that the best taquerias are the ones who have amazing salsas, and so we paid a lot of attention to that. And we’re trying to give them a little twist by using some ingredients not normally used in salas, like shiso and basil.

Where do you love to eat in Los Angeles?

There are so many places, from high to low, that are delicious. That’s what’s so incredible about L.A.’s food scene. You have the amazing food trucks and really beautiful food being cooked up in the strip malls. Holbox, for example, is one of my favorite places to eat. Yucatan-style mariscos, or seafood, in a little food hall area. At Damian, we’re across from Bestia and I really enjoy that kind of meal, too. We’re friends and they’re a nice neighbor. I used to love MTN on Abbot Kinney, which is closed now, but I go to Gjusta a lot for breakfast. I like to stay close to the ocean and normally go on a walk in the morning or go running, and Gjusta is a great place to go afterwards. I also really like L’antica Pizzeria da Michele in Hollywood. L.A. is a city of diners. People like to eat and I love the wide spectrum of possibilities.

Tell me about it!

In fact, I’m getting a little hungry for some of these places right now.

This interview has been edited and condensed for clarity.