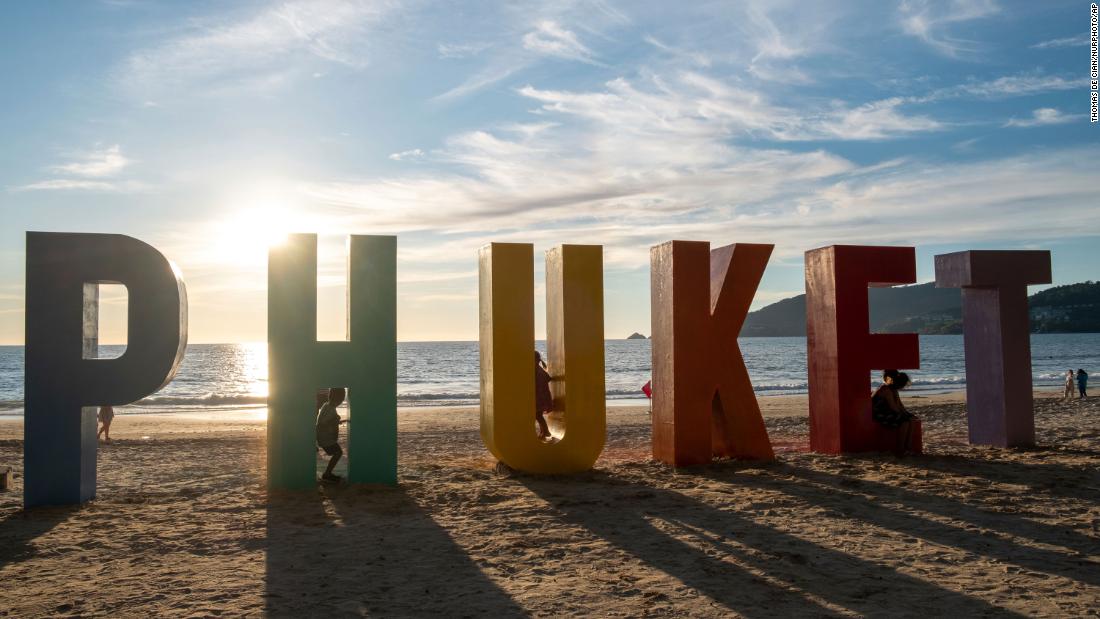 It would be an understatement to say that tourism fuels Phuket’s economy.

Before the pandemic, the picturesque Thai island — known for its sun-soaked beaches, diverse dining scene and colorful nightlife — was ranked the 15th most-visited place in the world by UK-based market research company Euromonitor International.

Tourism employs at least 15.3 million workers across Asia-Pacific, according to a report by the UN’s International Labour Organization.
So it should come as no surprise that Thailand’s Phuket “Sandbox” pilot project — which started welcoming fully vaccinated travelers for quarantine-free holidays on July 1 — has captured the region’s attention.
According to the rules, travelers need to spend at least 14 days on the island in a SHA+ accredited hotel before they’re able to travel into the rest of the country, but are allowed to travel freely on the island.
“Thailand is a massive economy in Asia, and everyone loves the ‘Land of Smiles’,” Phil Anthony, a Phuket-based wellness coach who runs travel consultancy RetreatAdvisor.com, tells CNN Travel.

“So if Thailand can show that we can handle things quite well — I think it will matter a great deal to the rest of Asia and perhaps pave the way for more of these sandbox models.”

For Anthony, who also operates a food and nutrition company called Nana Bowls, the Phuket initiative is a welcome experiment.

“When travel came to a halt in 2020, many people were scared. They closed their businesses and laid off staff, selling their properties and assets. They just kind of hunkered down,” says Anthony.

“Other people, like myself, took it as an opportunity to realign their brands and services, update menus and really think about the future … Hopefully, we can get back to full pace soon because so many people have lost their jobs.”

Since the sandbox started last month, Anthony has observed a trickle of travelers visiting the island. Already, he has welcomed two friends who can work remotely.

“My friend did the swab at the airport, waited for results at his hotel, and within six hours, we could go out and get dinner together,” he says. “It felt so good to sit down with a close friend and give him a hug.”

As of August 1, Phuket has welcomed 14,910 international arrivals, including returning Thailand residents opting to avoid a two-week hotel quarantine in Bangkok.

And while that is a fraction of pre-pandemic numbers, experts say slow but steady growth should enable officials to monitor the situation and adapt as needed.

“To be fair to Thailand, this is designed to be a longer-term project, building up towards the peak season from December to March,” Gary Bowerman, the director of travel trends and research company Check-in Asia and co-host of the South East Asia Travel Show podcast, tells CNN Travel.

“And when you are the first to re-open in the region, it is inevitable that you are going to get some things wrong. But Thailand has been able to stress-test some of its airports, hotel systems and new-era protocols. At the moment, the whole travel ecosystem is trying to work out what happens next, and this is made more difficult by the rapid spread of the Delta variant in Southeast Asia.”

More sandboxes on the horizon

In addition, a Phuket Sandbox extension program is scheduled to start on August 15, after being postponed from the August 1 target.

Under this model, travelers will be permitted to move on to the other pilot destinations — such as Koh Samui, Phi Phi Islands, Ko Pha-ngan, Ko Tao, Krabi, Ko Ngai, Railay Beach, Khao Lak and Ko Yao — after staying for seven days in Phuket.

The government had announced plans to deploy a similar scheme in the northern city of Chiang Mai in the coming weeks, followed by the rest of Thailand by October.

But at the moment, those plans appear to be optimistic at best due to an ongoing Covid-19 wave that is devastating mainland Thailand.

Just 5.8% of the country’s 70 million population is fully vaccinated, compared with 69% of people in Phuket. Some have criticized the Thai government for prioritizing vaccinations for tourism destinations, while many elderly and frontline healthcare workers have yet to be inoculated.

Though travellers have started to enter Phuket after meeting the strict entry requirements, the island’s tourism industry is still reeling from the effects of the pandemic.

Meanwhile, in response to the worsening situation in mainland Thailand, authorities have banned domestic travelers from entering Phuket from August 3-18, while tightening some restrictions for those already on the island.

“It’s a contentious issue in Phuket, with the island effectively now sealed off to domestic travelers,” says Bowerman.

“This can spread resentment about favoritism for international visitors and tourism operators on the islands. It also cuts off access for local people wanting to head to the islands to find or return to work.”

But officials tell CNN Travel that as of now, there’s no plan to suspend the Sandbox program.

“Based on the latest update, international arrivals under the ‘Phuket Sandbox’ program can still enter Phuket per the existing rules and regulations,” Pintida Harnpanpongse, a Tourism Authority of Thailand public relations representative, told CNN Travel on July 30.

“Because we are in uncharted territory, dealing with an unprecedented crisis where we don’t have all the answers, we are getting a better picture every day of what works and what doesn’t,” he says.

A worker waits for customers at a beachside restaurant on Phuket’s Kamala Beach on July 19.

“But these are important pilot projects, which could provide a way for us to travel for the foreseeable future. Covid-19 isn’t going anywhere and we can’t hide from it forever. And if the sandboxes collapse, that is not a sign of failure, but rather a sign that Thailand needs to pull the plug, recalibrate, and come up with an enhanced project based on the learnings from this one.”

To help the pilot programs succeed, tourism leaders in Phuket have urged European governments, as well as others around the world, to treat the island as a “green zone” that is separate from the rest of Thailand.

This would be similar to how European governments have assessed Madeira island in Portugal or the Faroe Islands in Denmark.

Thailand country is currently on the UK’s “amber” list and many European countries advise against unnecessary travel.

“What’s really important is that EU countries — the national governments, spurred on by travel agents, the media and other people — recognize that it’s necessary to disengage the perception of Phuket from the rest of Thailand,” KP Ho, founder of Banyan Tree Group, said at the recent Phuket Sandbox Summit attended by various tourism stakeholders.

“It should be a situation where Thailand could be a red alert zone but Phuket could be a green zone. It could be possible to create a series of sandboxes in other destinations, such as Koh Samui, Bali and Phu Quoc.”

Asian destinations on the radar

Elsewhere in Asia, many tourism-dependent locales stand to benefit from the success of Thailand’s reopening projects.

As a travel consultant, Anthony has kept an eye on places like Bali, Sri Lanka and Vietnam.

“Tourism is one of the backbones of these economies, but I would say Bali is most similar to Phuket. Tourism is crucial in both places. They also have international airports and are considered ‘wanderlust’ destinations with their palm trees, beaches and beauty.

While Bali had planned to open up “green zones” that would welcome foreign visitors once the island reached its vaccination goals, the plan was derailed by a surge in Covid-19 cases.

The island is currently under tight restrictions with over 1,300 cases per day recorded in late July and reports of oxygen shortages.

“Vietnam is very different, but they can reference some of the strategies here and perhaps apply them to some of their islands,” Anthony adds.

Phuket’s once popular Patong Beach is among the areas hit hardest by the pandemic.

Bowerman also points to Langkawi and Kuching in Malaysia, as well as Cambodia, and Laos as potential testing grounds for similar projects in Southeast Asia, while Singapore is looking to introduce quarantine-free travel from September.

Phu Quoc has also announced plans to launch its own tourism pilot project if it reaches vaccination goals by September, and Cambodia could open to fully vaccinated tourists by the end of the year, according to reports.

But it will come down to vaccination rates and supply, which vary across the region.

“Vaccination is absolutely crucial. You can’t open destinations without making sure your airport staff, tourism-facing staff, and all the residents are safe,” says Bowerman.

“You also have to make sure that the incoming tourists, whether they are international or domestic, are vaccinated to reduce the risk of Covid-19 infections.”

Malaysia, he says, started relatively slowly with its vaccination campaign but is now moving ahead rapidly. As of August 5, it has fully vaccinated over 30% of its residents.

“Langkawi has a very small population, so you could potentially vaccinate the entire island very, very quickly to create a sandbox-style program,” says Bowerman.

“But then you run the risk of dissatisfaction between the mainland and the islands if you prioritize restoring the tourism economies only on the islands. Plus, if you are welcome back inbound tourists, will you still permit domestic travelers to visit? Restoring a safe and equitable balance will be vital to the longer-term success of these pilot tourism schemes.”

“Everybody is watching and waiting to see what happens,” he adds. “But a proper recovery of travel in this region can’t happen until the Chinese start traveling again. We don’t know when that’s going to happen. As things currently stand, there are no indications that it will be anytime soon.”

Fresh Take: The Truth About Gun Violence, Food Insecurity And Food Workers
The best Gran Canaria resorts
China looks past Covid as tourist bookings surge for the Lunar New Year
Best Things To Do for an Unforgettable Valentine’s Day
Antibiotics Use In Farm Animals Is Growing—Here’s Why It Could Pose A Danger To Humans