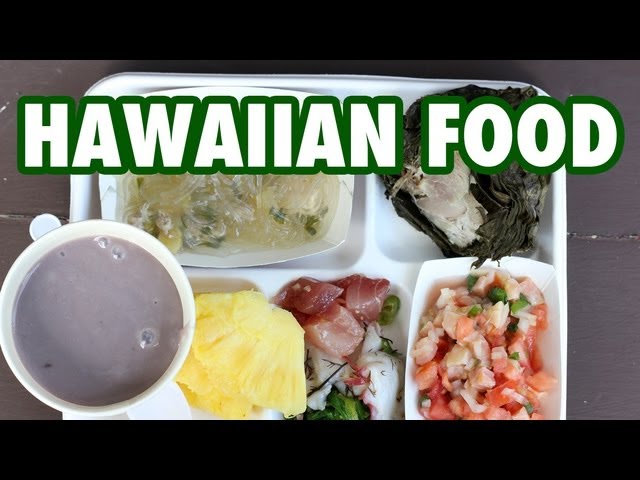 Even after eating lots of different cuisines, Hawaiian food still ranks as a favorite. Whenever I’m in Hawaii, I’m always happy to dine on luau style foods from the islands.

Here’s a quick rundown of the traditional dishes I eat during this video.

Chicken long rice, though Chinese in origin, has become one of the popular Hawaiian foods. It’s basically just long glass noodles cooked in chicken soup and served with pieces of chicken in it.

Laulau is the next dish on the list. The popular dish can either be made with pork, chicken or sometimes fish and it’s wrapped in luau leaves. The leaves and meat cook together into a spectacular flavor.

Lomi lomi salmon is the combination of tomatoes, onions, and raw salmon. The luau dish is common and is really good when eaten alongside a bowl of poi.

Poke is the sushi of the islands. Though it can be made from a variety of fish, the most common is cubes of ahi tuna marinated in soy sauce and sea salt. The tender cubes of fresh fish are wonderful!

Fruit, like Hawaiian pineapple is always great for dessert!

Though traditional Hawaiian food has adapted to the many cultures in Hawaii (now including things like SPAM musubi and chicken katsu), there are still so many uniquely Hawaiian dishes origination from Polynesia.

The track used in this video is called “Mandeville.” Here is a direct download to the song: http://music.incompetech.com/royaltyfree2/Mandeville.mp3

All license information can be found here: http://incompetech.com/m/c/royalty-free/licenses/

I used this song royalty free under the Creative Commons Attribution License 3.0. The video includes attribution to the producer of the music.