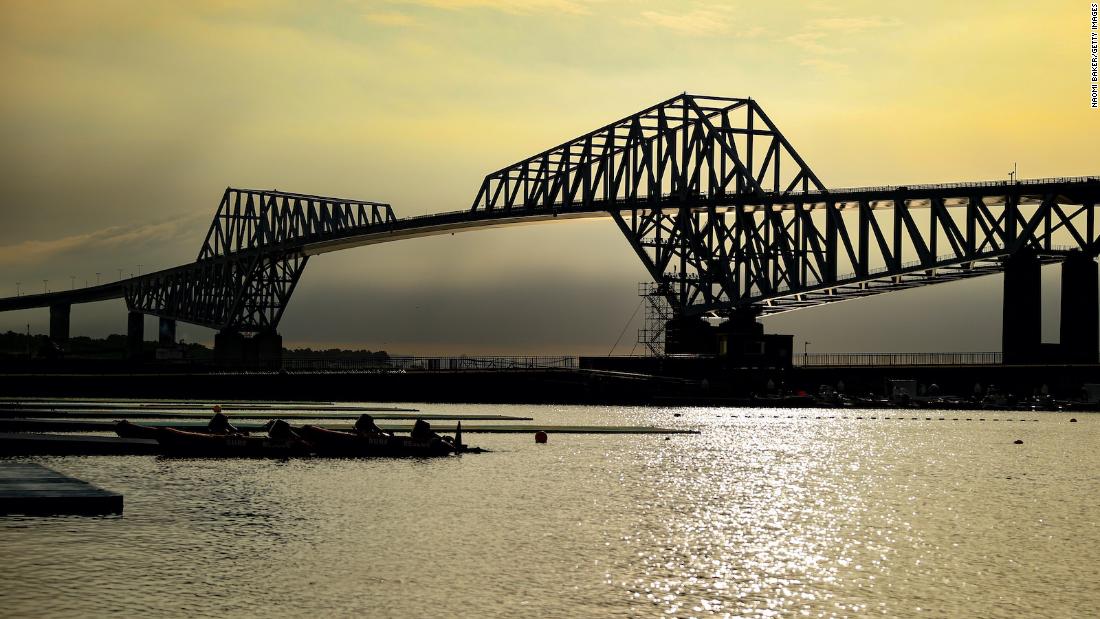 (CNN) — There’s nothing like watching the Olympics on TV to give you a major case of wanderlust.

Despite the mostly empty stadiums — spectators were banned — athletes from around the world have still been able to awe us, and with the beautiful scenery of Japan as backdrop.

The good news is that many of the special structures built for the Tokyo 2020 Olympics will be sticking around long after the events finish, so when borders eventually open up you can go and see where your favorite athletes competed for gold.

The majority of the Olympic and Paralympic events are being held in and around the capital.

But part of Tokyo’s pitch to the International Olympic Committee (IOC) was that most of the new structures made especially for the Games would remain in use afterward to benefit the people of Japan.

This venue in Tokyo’s famed Shinjuku area is the host of both the Olympics opening and closing ceremonies as well as most track and field events. It replaced an earlier national stadium, which was demolished in 2016.

World-renowned architect Kengo Kuma, who is also an architecture professor at the University of Tokyo, designed the new icon, which was intended to be the centerpiece of the Games.

The stadium can hold 68,000 people and is made of wood brought from 46 of Japan’s 47 prefectures.

There was no shortage of history-making moments in this venue at the Games, including the emotional high jump final in which Italy’s Gianmarco Tamberi and Mutaz Essa Barshim of Qatar opted to share the Olympic gold medal.

For great views of the stadium, head for the Shibuya Sky observation deck at the Shibuya Scramble Square building.

Located in southwest Tokyo, this sleek building hosted all of the volleyball matches during the Tokyo 2020 Olympics.

Team USA made history there on Sunday, when the women’s volleyball team beat Brazil for the gold medal on the final day of the Games.

Once the Games are over, the arena will serve as a local community center and as an event venue that can hold upwards of 12,000 people.

This arena in Chofu, in the western suburbs of Tokyo, was the first purpose-made Tokyo Olympics venue to be completed.

Covering an area of 30,000 square meters (323,000 square feet), the Musashino Forest Sport Plaza has a swooping silver and white roof. It hosted the badminton and modern pentathlon events during the Games.
After the Games, Tokyo officials say it will serve as a multi-purpose venue hosting major sporting competitions and entertainment events.

Bonus: it’s also a short walk away from the Studio Ghibli Museum.

Built specifically for the 2020 Games, the Tokyo Aquatics Centre is located inside the Tatsumi-no-mori Seaside Park, a popular green space where locals can play mini golf or simply enjoy the changing autumn leaves.

As the name implies, many water-centric sports like diving and swimming were held here during the Games, with plenty of history making moments taking place.

Olympic gold medal swimmer Katie Ledecky sits down with CNN’s Coy Wire to discuss the two gold and two silver medals she won for Team USA at the 2020 Tokyo Games.
Team USA made their mark at the Tokyo Aquatics Centre, winning the gold medal and breaking the world record in the Men’s 4×100 meter Medley Relay Final.
Meanwhile, American swimmer Katie Ledecky reaffirmed her status as an athlete who is able to compete over short and long distance events. Ledecky won 1500m and 800m freestyle golds in Tokyo and silvers in the 400 meter freestyle and 4×200 meter freestyle relay.

She has now won 10 medals across three Olympic Games.

After the Olympics, the Tokyo Aquatics Centre will continue to host events and will also function as a swimming facility for Tokyo residents.

Home to the rowing and canoeing events, this course was specially built in the canals between two man-made islands in Tokyo Bay.

After the Games, it will continue to host international rowing and canoe competitions and will be open to the public as a recreation area.

Visitors will know they’re getting close when they see the dramatic Tokyo Gate Bridge at the end of the course, a constant sight on screens during this year’s Games.

A view of Tokyo Gate Bridge on day five of the Tokyo 2020 Olympic Games at Sea Forest Waterway.

The striking, angular venue for field hockey — the electric-blue artificial turf looks as cool in real life as it does on TV — is inside the Oi Central Seaside Park Sports Forest alongside the Sumida River.

Locals love this park for its sunset views.

Officials say the venue — built specifically for the Olympics — will be used for hockey, futsal and other sports after the 2020 Games.

Usually just referred to as the Budokan — which means Martial Arts Hall — it was constructed in 1964, the first time Tokyo hosted the Games.

Since then, it’s also become a popular place for musicians to perform when they come to Japan.

At this year’s Games, it holds the honor of being the site of karate’s Olympic debut.

Japan’s Ryo Kiyuna etched his name into Olympic history here on August 6, becoming the first ever gold medalist in the men’s kata event.

The Olympic and Paralympic Athletes’ Village

Built across 33 acres in Tokyo’s Harumi district, the Athletes’ Village will have a new life once the sporting events are over.

The much-discussed cardboard beds will be removed and the entire complex will be converted into apartments, something always needed in a heavily populated city like Tokyo.

According to an Olympics spokesperson, there will be 5,650 residential units up for sale.

CNN’s Selina Wang takes a look at Tokyo’s Olympic Village, a city within a city where elite athletes from all over the world will spend their time when they’re not competing for Olympic gold.

Surfing made its first-ever appearance at the Tokyo Olympics, with Tsurigasaki in neighboring Chiba prefecture chosen as host due to its natural waves and close proximity to Tokyo.

Tsurigasaki is already massively popular with surfers from Japan and around the world and has plenty of hotels, restaurants and surf shops for those who want to plan their own surfing holiday when Japan reopens its borders to tourism.

As surfing makes its debut as an Olympic sport in Japan, CNN’s Will Ripley talks to members of the US team about the challenges of making Olympic history during a pandemic.

Tae kwon do, wrestling and fencing were among the events held in Makuhari Messe during the 2020 Tokyo Summer Olympics.

Team USA’s Gable Steveson will definitely look back fondly on his time in Makuhari Messe — he defeated Georgia’s Geno Petriashvili to win the gold medal in the men’s 125 kilogram final here on August 6.

First built for the sailing events at the 1964 Tokyo Games, the Enoshima Yacht Harbor in Kanagawa prefecture did the honors again this year.

It’s also where the Olympic cauldron was stored ahead of the Opening Ceremonies.

After the Games, it will continue to serve as a destination for water sports enthusiasts.

On a clear day, sailors can see past Mount Fuji from the Enoshima Yacht Harbor.

Boasting a convertible dome, the striking Saitama Super Arena is one of Japan’s largest multipurpose venues, hosting concerts, conferences and many other events in addition to sports.

The win makes WNBA stars Sue Bird of the Seattle Storm and Diana Taurasi of the Phoenix Mercury the first athletes to win five gold medals in any team sport in Olympic history.

As the biggest soccer stadium in Japan, Saitama Stadium was the logical place to hold the Olympic football games — it hosted the 2002 World Cup.

Canadians may want to come here to relive the moment their country won the gold in a dramatic final against Sweden. After two periods of extra-time and drama-filled penalties, Canada’s Julia Grosso buried the game-winner against Sweden to capture the first-ever gold medal for the country in women’s football.

After the Games, Saitama Stadium will continue to host major football matches.

Baseball is big business in Japan, and the 2020 Olympics marked the return of softball and baseball as official events.

Completed in 1978, Yokohama Baseball Stadium hosted the action, which culminated on Saturday night when the US faced off against Japan for the gold medal in baseball. Ultimately the host team came out on top, beating the US 2-0.

After a 13-year hiatus, baseball is returning to the Olympics — although no fans will be there to witness it. For the prefecture of Fukushima, that absence is felt even more.

The theme of the Tokyo Olympics was “the recovery Games.”

To honor that, the Olympic torch relay began at the J-Village National Training Center in east Fukushima, which was the base of operations for the first responders who came here following the devastating earthquake and tsunami in 2011.

Located in northeast Japan’s Tohoku region, it has since been converted into a community center and sports training venue.

On Japan’s northernmost island of Hokkaido, Sapporo Odori Park is a popular destination thanks to its annual winter festival.

This year, it hosted the race walking and marathon events. On the final day of the Games, legendary Eliud Kipchoge of Kenya won gold in the men’s marathon, crossing the finish line in Sapporo Odori Park with a time of 2:08:38 for his fourth career Olympic medal.

The Delevingne Sisters On Prosecco, Pandemics And Pink Drinks
Three easy ways to find hidden cameras in hotels and rental homes
Lufthansa is bringing back the A380
Here’s The Latest Data On Climate And Food And It’s Not Good
Could you land a plane in an emergency?