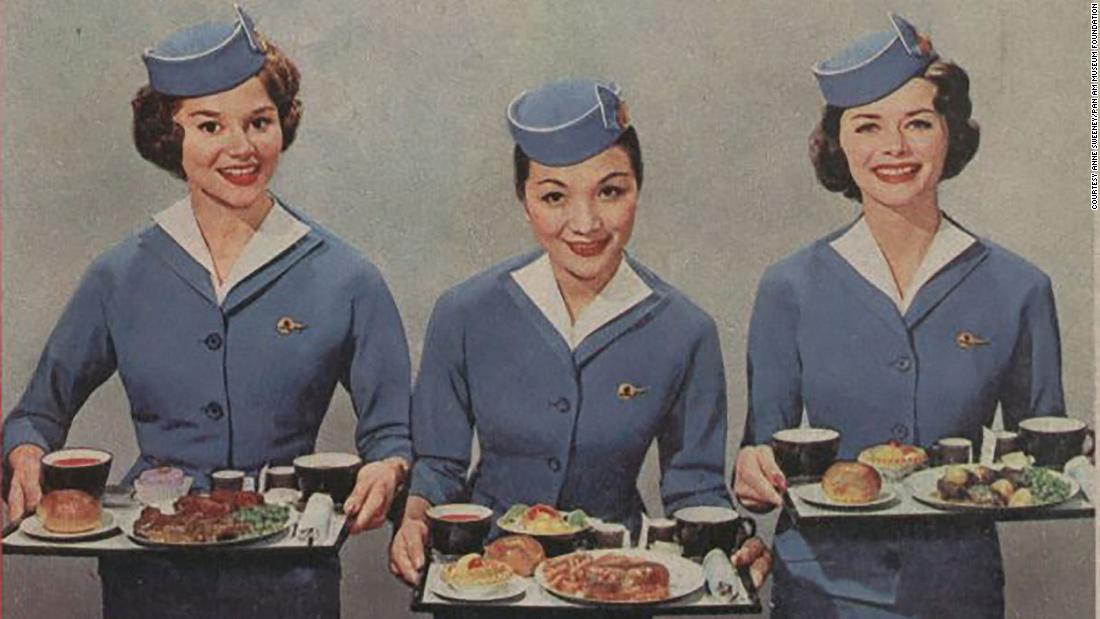 (CNN) — Inflight dining was far from its glory days even before Covid ensured everything was plastic-wrapped and pre-ordered.

On long-haul international flights, the question “chicken or fish” is often met with resigned acceptance of a nuked, tiny meal in an aluminum foil tray. A limp salad — with half a cherry tomato. A roll so hard it could be confiscated by the TSA as a weapon. An underwhelming main that could be both chicken and fish. And who even eats yogurt for dessert at dinner?

Domestic flights? Let’s not even go there.

But imagine being asked if you’d rather have the chilled Beluga caviar or smoked Nova Scotia salmon to start? Maybe the Tournedos Rossini (a legendary combination of filet mignon, foie gras and black truffle) for your entree?

And would Madame like to choose American or European cigarettes to finish her meal?

Back in the golden era of air travel, inflight dining menus were a whole different ball game. Even in Coach.

One woman who knows this more than most is Anne Sweeney. She flew as a flight attendant with Pan Am from 1964-1975, criss-crossing the globe:

“All of Pan Am’s flights were international and we went to every continent except Antarctica. I loved Morocco; other favorites were London — where I was based for six years — Paris, Beirut, Bangkok, Tahiti and Hong Kong, where I was based from 1967-68.”

It’s clear that food service was the crucial part of the inflight experience — one that demanded real cooking skills — even at the back of the “bus:”

“Our five-week training program spent about 70% of the time on food and service training because we didn’t just pull something pre-cooked out of a drawer,” says Sweeney. “The ‘galley girl’ in first class had to set up carts and cook individual entrees as well as a roast beef. We also cooked eggs to order for breakfast. And one of the worst galley tasks was actually scrambling eggs in coach!”

Understandably, those in business and first class — the pointy end — would get even better culinary creations, in some cases catered by legendary restaurants. But even the dishes served in coach would make today’s fliers green with envy.

“While Pan Am’s first class service was superb and created by Maxim’s of Paris, it should be noted that the economy meals were great too,” recalls Sweeney.

“We heated vegetables and a meat entrée in the galleys — they came on frozen and always had a sauce. Entrées that I remember dishing out 120 times on a full 707 (veggies were another 120 turns of the wrist) included chicken vol-au-vent, beef bourguignon, Cornish hen, beef stroganoff and more.”

While based in Hong Kong, Sweeney also flew exclusively on R&R operations that Pan Am set up for the US government, taking troops from Saigon, Da Nang and Cam Ranh Bay in Vietnam to Bangkok, Hong Kong, Taipei, Kuala Lumpur and Penang. A different type of inflight meal again — but one that was always welcomed:

“The menu was always steak, potatoes, vegetables, ice cream and milk. Bottles of ketchup were passed through the cabin. Not very elegant — but certainly appreciated.”

Inflight dining down under — since the 1930s

Other dishes on global airlines from the golden age of flying wouldn’t seem out of place in Michelin-starred restaurants today. Australian national carrier Qantas celebrated its centenary last year and has chronicled inflight meals since the 1930s, as David Crotty, curator at Qantas Heritage Collection, explains:

“Qantas began inflight meal service with the Empire flying boats in 1938, between Sydney and Singapore. The Rose Bay hotel was our first inflight meals kitchen, although hot food was packed in large flasks and not heated on board. Stewards were employed as cabin crew.”

Among a number of firsts, Qantas introduced frozen food to Australia and in 1948 their first female cabin crew began flying. They also produced special menus for Christmas and for events such as the 1954 tour by the British royal family, where fliers tucked into dishes including “poached snapper with hollandaise sauce” before “grilled French lamb cutlets with Saratoga potatoes.”

Australian airline Qantas began its inflight meal service back in the 1930s.

Says Crotty, “In the 1950s and ’60s international flying was expensive and the menus reflected this with many elaborate meals described in French, but by the 1970s, things were more relaxed as flying became increasingly democratic with the Boeing 747.”

Flying from London to Auckland on Qantas meant stops in Rome, Bombay, Hong Kong and Melbourne — with an astonishing diversity of food and drinks served along the way. “Strasbourg foie gras in pastry crust with duck galantine” sounds tempting — and decadent enough — but it was just one of four appetizers on just one leg of the flight. Your entree could have been “breast of pheasant in sour cream” or maybe “cutlet of veal with ox tongue and almonds.”

It wasn’t just down under however, where the skies were decidedly gourmet.

Back in the late 1960s, Alaska Airlines launched its Golden Samovar service to celebrate “Alaska’s colorful Russian heritage.” As their publicity at the time explained:

“Lovely stewardesses in their elegant, long black maxicoats welcome you aboard. Authentic Russian balalaika melodies set the mood as hostesses serve a beverage from the samovar — the Bolshoi Golden Troika, (a mix of coffee, vodka and liqueurs) created by the house of Seagram. Russian menus feature caviar, veal Orloff, tartlet Odessa and more.”

The service complimented Alaska Airlines’ brief operation of charter services to the former USSR and continued in subsequent years “due to popularity with passengers.”

With that Golden Troika concoction, we can see why.

On American Airlines, vintage photos show roast beef being sliced and served to order from a trolley, while even kids kicked back with burgers as part of a full meal service.

Back in the early 1960s, its Royal Coachman menu — what is it with British royals and inflight dining? — featured a bugler heralding the arrival of beef consommé, sauteed breast of chicken in wine and a fruit tartlet.

Aboard Singapore Airlines at 35,000 feet, the trolleys would came laden with platters of salads and hors d’oeuvres, cheese plates, decadent-looking desserts — and yet more roast beef.

It even launched a “banquet in the sky,” where first class passengers were treated to a dinner service “with a choice in the main course (entrée) of quail Angostura bitters, crayfish etouffée or beef wellington with Périgueux sauce — in other words with Madeira and black truffle. Those flying from LA to Tokyo — and then on to Singapore — could enjoy broiled lobster tail, veal loin apricot or marinated tenderloin.

It sure beats a bag of pretzels.

And if you’d think that special meals and dietary requirements have been a pretty recent addition inflight — then think again.

Former Pan Am flight attendant Anne Sweeney — still working today, at her own public relations firm in New Jersey — recalls the variety of meals on offer:

“There were vegetarian meals for Indian passengers, salt-free, diabetic, kosher. The Mormon Church was a big client of Pan Am and they sent their missionaries on our flights — sometimes up to 50 young men in white shirts and black ties with short hair. They really stood out in the ’60s and ’70s! They had to have juice and water — no booze, coffee or tea.”

One element that Sweeney clearly didn’t miss, however, was in-flight smoking:

“Smoking is not my favorite subject since I never smoked, but like several women who participated in a study from Dartmouth Medical School, I suffered from the effects of second-hand smoke. In First Class, we offered complimentary mini-packs of Marlboro, four to a pack. Crew members would take the leftovers off the plane and either smoke them or use them as tips in the hotels where we stayed.”

As other vintage menus show, such as from BOAC — the forerunner to British Airways — menus would often end with the line “Packets of 20, English and American, plain or filter tip.”

Consider that, next time you pay $12 for a blanket.