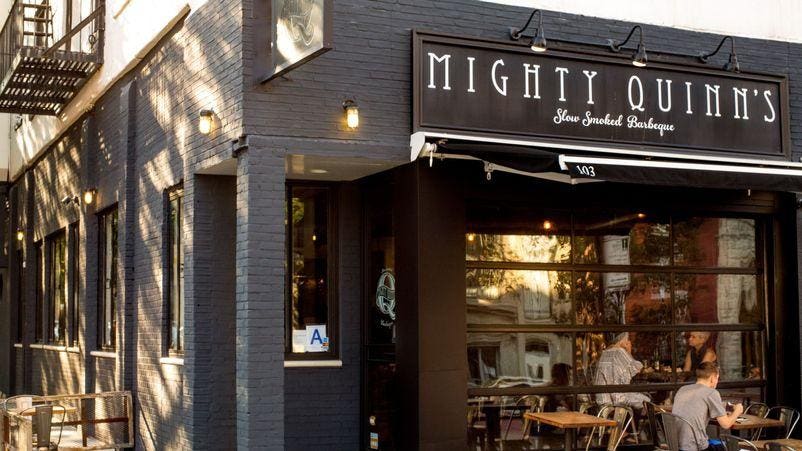 Unlike many burger and pizza chains, most barbecue eateries stay local. The bbq that thrives in Kansas City doesn’t resonate with clientele in Houston, which explains why most chains flourish regionally but not nationally.

But Mighty Quinn’s, a New York City-based bbq chain with eight locations and one kiosk at Yankee Stadium and two at Madison Square Garden, is looking to break the trend and launch franchising beyond the metropolitan area.  Financing some of this endeavor will be an investment by Bolt Ventures, a venture capital firm, as a minority investor.

It’s expanding by opening some company-owned shops combined with franchising. Micha Magid, its co-founder and co-CEO, explains, “While we grow our corporate store base in the Metro New York area, the franchise business allows us to open in new markets, with experienced operators, and that creates a faster go-to market strategy.”

It’s a mature chain that launched in 2012. When it first opened, the Time Out New York restaurant critic said, its “Jurassic-sized beef rib is so impossibly melt-in-your mouth tender, one bite will quiet even the pickiest of BBQ hard-liners.” She described its BBQ as “Texas spice meets Carolina vinegar.”

Of its eight current stores, five are located in Manhattan, one each in Garden City, Long Island, Clifton, N.J. and overseas in Dubai, with the three stadium kiosks.

In 2021 it expects to debut a corporate location in Hoboken and two franchised outlets in Union, N.J. and Forest Hills, Queens.

And in 2022, it’s prepared to expand further with three additional franchised stores in Brooklyn, Florida and Maryland. Magid adds, “We will be working to add more to this pipeline.”

Mighty Quinn’s has also developed a line of consumer products featuring bbq sauces, dry rubs and coming soon, refrigerated meats. Originally, they were only sold at its eateries and website but have expanded to over 50 grocery stores including Zabar’s and Citarella’s, but so far, none of the national grocery chains. Sales are just getting off the ground but are expected to grow.

Magid says Mighty Quinn’s is best known for its brisket. “When we started selling bbq as a pop-up in Brooklyn 10 years ago, we became known for our brisket and to this day, it remains our top seller,” he explains.

But its menu also includes bowls that can appeal to vegetarians that include sides such as mac and cheese, brussel sprouts, and sweet potato casseroles.

Expanding nationally for bbq chains is no easy task. Magid acknowledges, “The craft of bbq takes 20 hours to smoke a brisket and four hours to smoke a raft of ribs. It’s an art of time management beyond grilling a burger for five minutes.”

But Mighty Quinn’s has devised a solution to the bbq conundrum. “We’ve developed a scalable model where multi-unit operators can centralize production at one location and not have to worry about production at the satellite locations,” Magid declares.

But it won’t be adjusting its recipe when it expands to Florida or anywhere else. While Magid describes regional differences about Kansas City burnt ends or Texas dry rubs, he counters that “We’ve borrowed the best recipes from all these locations to create a menu that anyone used to any BBQ style will feel comfortable.”

The pandemic wreaked havoc on Mighty Quinn’s business, at least temporarily, when it was forced to shutter eight of its twelve locations. Most have reopened, but two that were located in malls in Westchester and New Jersey shuttered.

The stores located in residential neighborhoods have revitalized because so many people are working from home, boosting its lunch business. Its financial district shop suffered a large drop in revenue since so few office workers were coming in but it too is bouncing back.

Its franchising efforts began in 2018, but got delayed, due to Covid. The Bolt venture capital enabled it to get off the ground, and then, support its franchisees via training, monitoring and marketing, and its consumer packaged efforts

One key to franchising is finding the right operators. “Is the operator the right person to represent the brand?” he says is key. Finding suitable real-estate is equally important.

Mighty Quinn’s also reaps about 50% of its revenue from off-premises sales via third-party delivers including UberEats, Grubhub and Doordash, and via its own mobile app.

“We want to be where our customer wants to find us,” explains Magid.

It also has two ghost kitchens in its corporate locations. It has exclusive rights to Otto’s Tacos, a New York City taqueria, that closed its physical locations and a brand it developed, Sugar Wing, which specializes in crispy chicken sandwiches and wings.

Magid identifies the plan for the future as “growing from metro New York up and down the East Coast including markets in Florida, Boston, Washington, D. C. and Philly.”

“There aren’t a lot of national bbq chains,” Magid admits. “Don’t tell anyone, but we see a huge opportunity,” he adds.