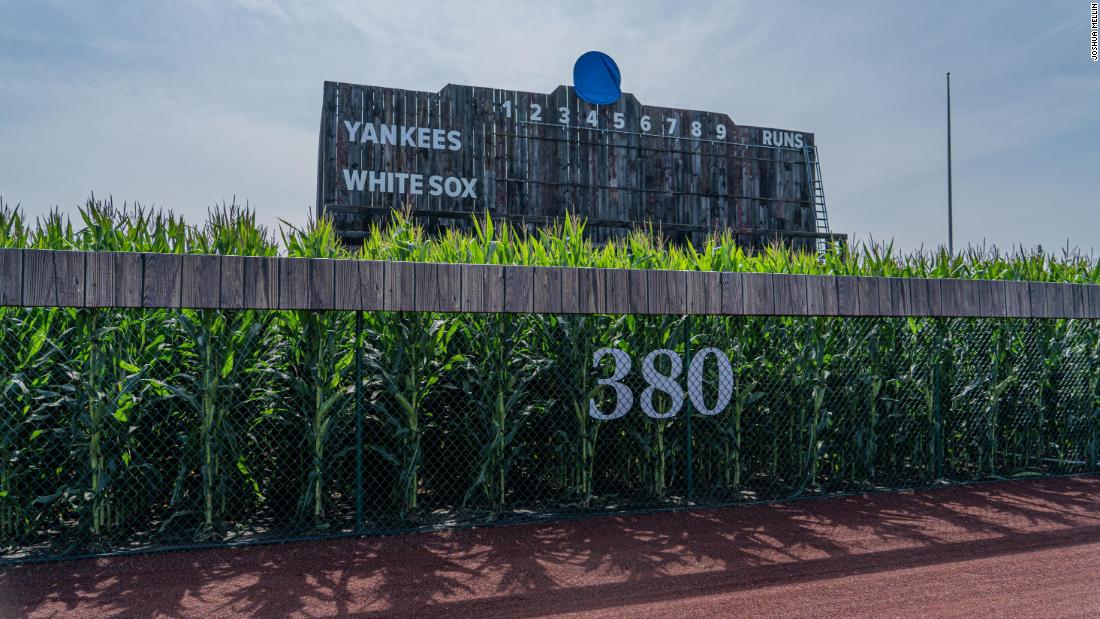 It’s the place where dreams will come true for baseball fans, as the Chicago White Sox and New York Yankees emerge from the cornfields to play the first official Major League Baseball game in the state on a specially built field next to the original “Field of Dreams” movie site in Dyersville. The game is scheduled for Thursday night and set to be televised nationally on FOX at 8 p.m. ET.

Based on W. P. Kinsella’s novel “Shoeless Joe,” the 1989 film “Field of Dreams” starring Kevin Costner is considered by many to be one of the finest sports movies of all time for how it captures the timeless nature and universal appeal of baseball. Members of the cast of the best picture Oscar-nominated film are expected to be in attendance at this week’s game.

In the film, Ray Kinsella, an Iowa farmer, portrayed by Costner, hears a voice beckoning through the swaying cornfields: “If you build it, he will come.” Convinced carving a baseball diamond into the crop will summon the spirit of legendary ballplayer Shoeless Joe Jackson, he sets out to do just that with the support of his wife, Annie (Amy Madigan) and daughter Karin (Gaby Hoffman), despite the financial hardship it incurs.

The site of the movie “Field of Dreams” has long drawn curious visitors and baseball fans.

The movie expertly strikes all the right emotional chords, and communicates what drives our dreams. Setting off and letting a voice guide the way. Opening up to the world, discovering what connects us and continuing the cycle. It’s what’s drawn generations to the Field of Dreams for over 30 years now.

Anticipation has only grown for the game after being delayed last year by the pandemic. The contest was originally slated between the White Sox and St. Louis Cardinals in 2020, after a scheduling issue precluded the Yankees as envisioned. The game was rescheduled so fans could be included, along with the Yankees, paying homage to the teams most prominently featured in the movie.

Since the movie premiered, the original baseball field and farmhouse film site has remained a significant touchstone for the entire state of Iowa, drawing curious visitors and baseball fans from all over.

Kevin Costner, who starred in the film, was at the new stadium on Wednesday before Iowa’s first MLB game.

People will come, Ray, people will most definitely come

Yankees fans Mike Dempsey and his father Frank, a Vietnam veteran, drove out from New York for the game to celebrate Mike’s 50th birthday, after he’d played in a tournament at the site a few years previously. To mark the occasion they decided to have a “last catch” together and vowed to retire from baseball together, as father and son.

Normally, the original field the movie was filmed on is open from dawn to dusk for shag batting practice, to have a catch or see “the greatest show on dirt,” the Ghost Player games (a Harlem-Globetrotters-meets-baseball comedy routine hosted on scheduled Saturdays for free that’s returning this month after a two-year pandemic hiatus.)

To access the new field, currently dubbed “MLB Stadium,” attending fans will first enter at the original Field of Dreams from the film, and be invited to dip themselves in “magic waters,” look around, even have a catch on the field, before being summoned by some familiar voices to pass through the centerfield cornfield on a path that leads to the MLB Stadium, complete with a corn maze in the shape of MLB’s silhouette logo separating the two fields.

The new field was rebuilt this year for the special game. Locals hope it will become an annual event.

Constructed first in 2019, dismantled in 2020, and rebuilt this year for the game, MLB Stadium was built with seating for a potential capacity of up to 8,000 people, or nearly double the town of Dyersville’s entire population. Tickets for the game were allotted via a lottery limited to fans who have Iowa zip codes. The lucky chosen few were able to purchase up to two tickets and one parking pass. The cheapest resell tickets were available on StubHub in the week before for around $1,000 each, and some prime seats still had asking prices up to $10,000.

Perched atop her car less than a mile from the farm site with binoculars in hand, Jes Henize hoped to catch a view of the house from the movie after planning to visit on her first trip to Iowa on a cross country trip from Georgia to Oregon.

Unaware of the game, she “just got lucky and found out the White Sox and Yankees were playing, by pure coincidence.” Even though access was limited to ticket holders, Henize happily proclaimed “I will remember this forever,” gazing at the ballpark’s flood lights illuminating the cornfields.

Stadium lights illuminate the field amid acres of cornfields in Dyersville, Iowa.

All the attention is a much needed boon for the rural ballpark recovering from diminished visitors during the Covid-19 pandemic. The city’s three hotels have been booked full for the game for months and stores have stocked up with souvenirs, but the hope is the fanfare around the game will reignite passions around the movie and tourism to Dyersville for years to come.

Shelly Kalb, the general manager of the Comfort Inn Dyersville near Field Of Dreams, says despite the fact they’ve been booked up for over a year her phone still has not stopped ringing, and they’re already booked for the same dates next year in anticipation the game will become an annual affair.

Local businesses are already seeing the benefit. Robyn Maiers, one of the owners of Just For You, a custom T-shirt and souvenir shop in Dyersville, has her staff “busting butt printing shirts” with their popular “If You Build It” designs, saying they are “working day and night to fulfill all their orders.”

Murray Cook, MLB Field & Stadium Consultant, who helped oversee construction of the new stadium, likened the process of bringing the new stadium to life as “just like Ray Kinsella and his daughter did on the tractor years ago.”

A corn maze in the shape of the MLB logo is part of the new ball field.

Complete with bullpens designed to resemble Chicago’s Old Comiskey Park and a unique manual scoreboard, the stadium also features a 16-foot removable panel in right field that will allow for the players to enter the playing field through the corn as in the film.

The logistics of ferrying the players to a one-off game 200 miles from the nearest MLB city (Milwaukee) was no easy feat either, with the teams flying in from finishing their respective series to the airport in Dubuque, Iowa, on game-day, where they’ll board buses to whisk them through the cornfields to Dyersville.

A sight that will surely rival the vision of the Lansing Family Farm peeked in the final shot of the film, as thousands of cars line the single-lane farmland road to visit the cornfield framed ballpark. The Field of Dreams game joins other notable locales MLB has hosted unique events in recent years: The Fort Bragg Game in 2016, London in 2019, and the annual Little League Classic in Williamsport since 2017.

For many, “Field of Dreams” teaches us you need to have big dreams and follow them. An MLB game coming to a 193-acre farm in Iowa represents a dream realized.

Joshua Mellin is a CNN Travel contributor based in Chicago who has previously covered MLB events in Japan and was once a batboy for the Chicago Cubs. This article is dedicated to his family, especially his Aunt Debbie, for always encouraging him to follow his dreams.

Hoping to beat the tourist crowd on your trip to Japan? That ship has sailed
Special Limited Edition Portuguese Wine Honoring A Leading Figure In The Douro Valley
Delta pilots would get more than 30% in pay raises under new contract deal
The best hotels in London for Christmas
Cyber Monday Wine Deals