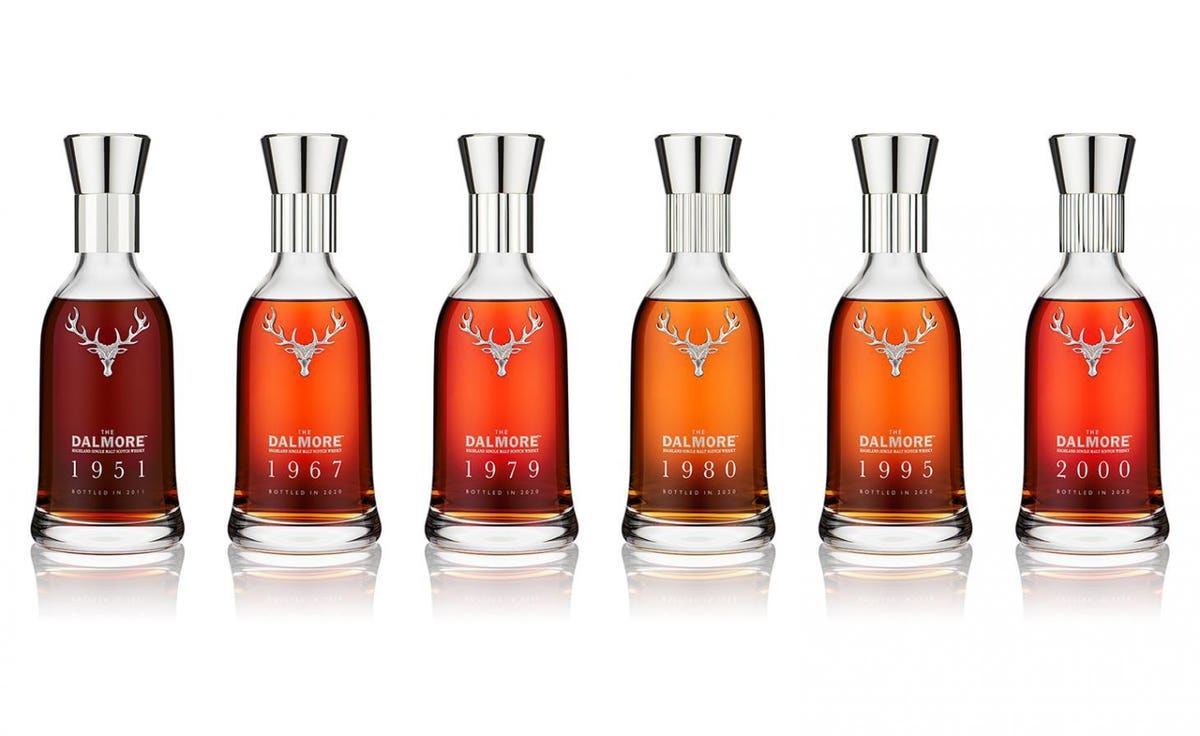 Summer is coming to a close and as some markets return to normality, many of the world’s biggest whisky brands are moving ahead with new product releases, some destined for bars and others for the luxury retail space. From 80-year-old releases, to expressions completely out of character for certain distilleries, here are some of the most anticipated whiskeys launching in the coming months.

Whyte & Mackay have announced an exciting new range of six decanters by the Dalmore distillery, each dedicated to a decade in the distillery’s rich history.

Richard Paterson, Dalmore’s master distiller carefully selected each cask from the distillery’s stocks; having spent five decades with the distillery himself, he’s obviously the man for the job.

‘The Dalmore Decades is a unique moment for us to celebrate our history and the key moments which have marked the last six decades. Each bottle tells a distinctive part of The Dalmore’s story: from the 1951, the last whisky created during the Mackenzie era, the family which owned the distillery for over a century and whose heritage allows us to display the 12-point royal stag on every bottle, through to the first Scotch whisky created in the new millennium.’

The series includes a 60-Year-Old drawn from two twin sherry casks, a 53-Year-Old, and a 40-Year-Old expression. A full set of the decanters will go on auction at Sotheby’s in Hong Kong this October, followed by the sale of 15 sets of the five decanters (minus the 1951) at select retail channels in the US, UK, France, and certain Asian markets. Good luck grabbing a set of these, as it’s definitely one of the most limited and highly anticipated Scotch whisky releases of 2021.

Over in the US few collections are as sought after as Sazerac’s annual Buffalo Trace Antique Collection. The announcement for the new collection usually drops in September, with a release date scheduled soon after. Not much information is available on this at the moment, but the Antique Collection deserves a spot on the list regardless, as one of the most hunted annual collections in American whiskey.

Keep your eyes peeled for the announcement next month, and act quick!

The 2021 edition of Diageo’s hugely popular “Special Releases” is coming and this year’s art and branding looks amazing – in fact, the labels are my favorite of the Diageo special releases to date.

So far, we only have the teaser video to go by and some posts by the Diageo team, but it looks like each release in the range will be depicted with a legendary creature; hence the name of the collection. The artwork looks breathtaking and seems to perfectly match each brand showcased.

‘Legendary tales speak of eight mythological creatures that roam the land and rule the waters hidden from sight in the lochs and rugged highlands and known to only a privileged few,’ says Ewan Gunn, Diageo’s global brand ambassador. ‘The cask strength collection of whiskies includes one-of-a-kind bottlings from Oban, Talisker, Lagavulin, The Singleton of Dufftown, Mortlach, Cardhu, and for the first time in over a decade, Royal Lochnagar.’

Excited? I sure am.

Gordon MacPhail are pushing boundaries with their upcoming 80-year-old single cask release, set for release in October 2021 with the auctioning off of the first decather to be filled, decanter number 1. Distilled at the Glenlivet Distillery in 1940, this will be one of the oldest Scotch whiskies ever bottled. The decanter and case for the release will be designed by famed architect, Sir David Adjaye. The design will be revealed in September, prior to the release.

‘When collaborating, I am looking for like-minded partners in terms of their craft, beliefs and traditions,’ said David. ‘I loved Gordon & MacPhail’s rigour and obsession with their products and their craft – a romantic commitment that enables one to do exceptional things. Our partnership felt so organic.’

Over in Japan, Asahi has announced two new releases which delve into a unique category – contradicting what each of their distilleries is famed for! From the world renowned Yoichi distillery known for powerful, peated, smoky whisky, fans will be able to enjoy the Yoichi Non-Peated expression. From Miyagikyo, the distillery known for fruity, floral whiskies, we will receive the Miyagikyo Peated. From two distilleries that have clearly defined their style over the decades, these two expressions are extremely exciting additions.

Now, for the bad news – These two expressions are going to be released in Japan only, at least initially. However, if the past is any indicator, an allocation should make it overseas to a market near you.

Launching on September 28th, the expressions will be sold to on-trade venues only, aimed towards drinking fans instead of collectors and bottle flippers. This is a sales strategy more and more distilleries in Japan seem to be taking.

There you have it – Whether you’re a drinker, a collector, or a die-hard fan, these sets and collections are some of the most exciting ones to launch in the lead up to the New Year. Happy hunting!