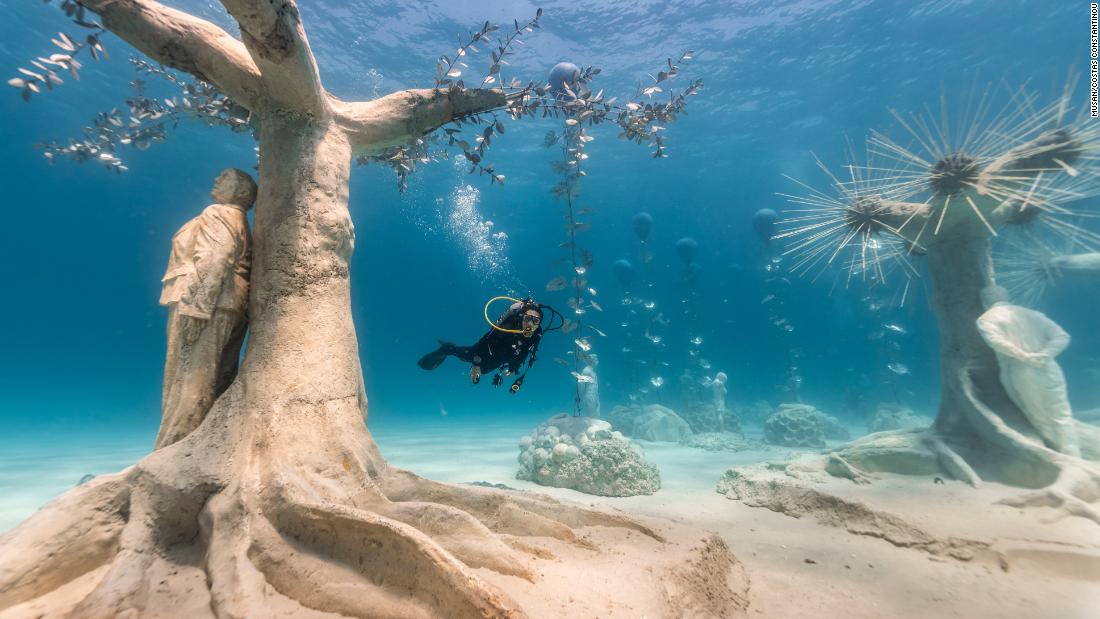 (CNN) — The artist behind the world’s first underwater sculpture park has just unveiled his latest sub-aquatic project — a spectacular sunken forest located off the coast of Pernera beach in Ayia Napa, Cyprus.

The Museum of Underwater Sculpture in Cyprus (Musan), which cost €1 million ($1.1 million) to bring to life, is made up of 93 sculptures by Jason deCaires Taylor, whose previous work includes the Molinere Bay Underwater Sculpture Park in Grenada and Mexico’s Isla Mujeres National Marine Park.

Taylor aims to put the spotlight on “rewilding our natural spaces” and “reforesting areas of barren habitat” through the installation, which explores the relationship between man and nature.

The Museum of Underwater Sculpture in Cyprus features 93 sculptures by Jason deCaires Taylor.

Some of the figures featured include huge trees weighing up to 13 tons as well as children pointing cameras at shapes depicting the human race while playing hide and seek.

“I tried to incorporate as many references to climate change and habitat loss and pollution as I could, because those are really the defining issues of our era,” Taylor tells CNN Travel.

“I’m kind of hoping that it leaves the visitor with a sense of hope along with a sense that the human impact isn’t always negative. That we can reverse some of the things we’ve done.

“But I also hope that it instills some other messages about holding genes and corporations responsible. It’s really about safeguarding the future of the younger generation.”

Each of the sculptures, which were lowered below the surface by crane, were made with inert pH neutral materials that attract marine life and have been placed at different depths, so that the biodiversity of the area may be “enriched” by their presence over time.

The evocative installation explores the relationship between man and nature.

“They’re designed to sort of let natural growth settle on the substrate,” explains Taylor. “After five or six days, I could already see a thin film of algae on each of the heads of the sculptures, which have these quite complex habitat areas, and they were already full with little juvenile fish.

“So that was very, very encouraging. I’m really looking forward to going back in a couple of months time and seeing how it aggregates marine life.”

Taylor spent two to three years working on Musan, which had been due to open last year, but the launch was delayed due to the global pandemic.

“We started building the project in Cyprus in March last year,” says Taylor. “So we probably chose the worst time possible.

“We had a lot of difficulties with changing flights, organizing materials and moving everything. It’s certainly been one of the most challenging projects that I’ve ever done.”

The underwater forest is located off the coast of Pernera beach in Ayia Napa, Cyprus.

The museum actually begins on land, with a physical entrance on Pernera beach and a pathway leading towards a descent point with a floating platform that leads down to the submerged sculptures.

Musan is accessible to both divers and snorkelers, and Taylor hopes that it will lure more visitors to this marine protected area of Cyprus, which he describes as having “some of the best visibility I’ve ever been in.”

“It’s obviously very different from other places,” he explains. “It’s not a tropical region, where we have coral reefs and all the habitat that that brings, it’s more of a temperate area.

“So it will attract different species of marine life, and it’s one of the first pieces I’ve done where the works go from the seabed up to the sea surface, with floating elements.

“The floating trees move quite a lot in the current — they go very, very close to the surface.”

One of the sculptures have been strategically placed so that it’s looking out onto the barren stretch of sand along the waters of the Mediterranean, considered the world’s most over fished sea.

“It’s meant to convey that we need to look after these protected areas massively and we need to talk about policing them in a much, much tighter way,” he adds.

Musan is a joint collaboration between the Department of Fisheries and Marine Research, the Ayia Napa municipality and the Ministry of Tourism.

“The underwater museum will be a living visual and ecological experience, with works of art interacting with nature and evolving over time,” Marina Argyrou, director of the Department of Fisheries and Marine Research said during a statement at the launch of the project last month.

Taylor hopes to put the focus on “re-wilding our natural spaces” and “re-reforesting areas of barren habitat”.

“And I’m certain it will bring people closer to the marine environment and the conservation and protection of our marine ecosystem.”

Visits to the museum can be booked via local dive centers.

Taylor’s work is primarily focused on promoting ocean conservation and highlighting the impact of climate change.

He’s currently working on new exhibits for Australia’s Museum of Underwater Art in Townsville, northern Queensland on the Great Barrier Reef, which has lost half of its corals over the past two decades, as well as a future exhibit to be based in the Red Sea.

Taylor says he’s also been in talks with the Grenadian government about the possibility of creating some new underwater installation on the island where he launched his first such project back in 2006.

The artist launched an underwater museum consisting of six portrait sculptures weighing around 10 tons in France near Cannes earlier this year.

Travel companies are ‘greenwashing’ — here are 3 ways to find ones that aren’t
Top Landmarks to Celebrate Black History Month
Fungi-Powered Ingredients Startup Michroma Promising To Remove Petroleum From Food Colorings Raises $6.4 Million In Venture Funding
Antibiotics Use In Farm Animals Is Growing—Here’s Why It Could Pose A Danger To Humans
Valentine’s Day Gift Guide: The Best Italian Gifts For Pasta Lovers