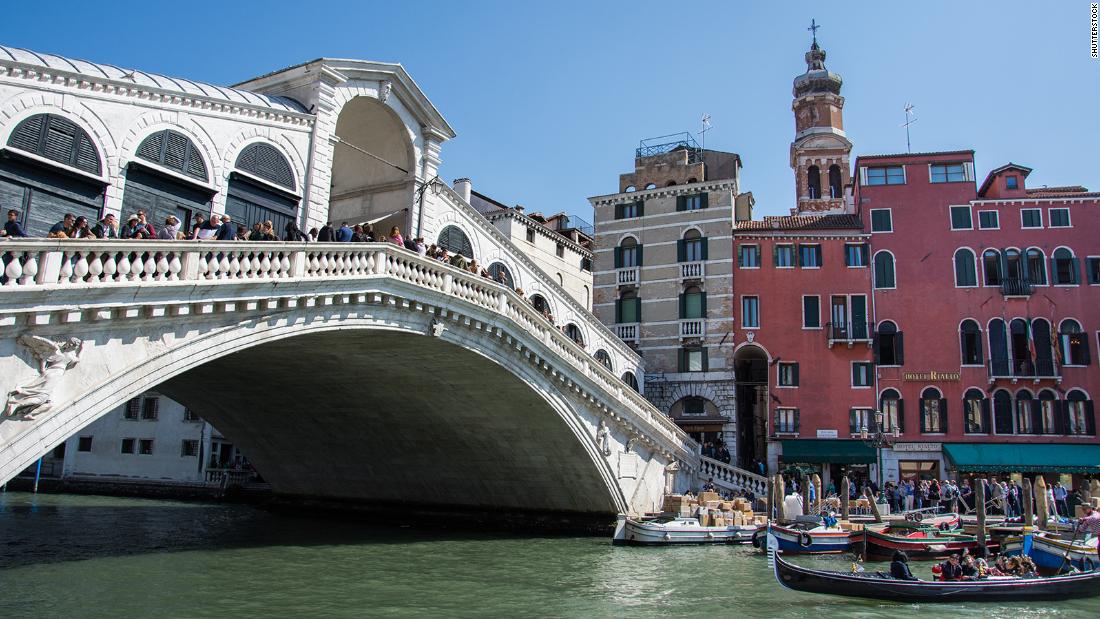 (CNN) — Its 403 bridges, myriad canals and pretty cobbled streets have made Venice one of the world’s most beautiful cities. But what’s one person’s Instagram dream is another’s mobility nightmare.

The lagoon city has long been near impossible for wheelchair users to navigate, with only a limited number of areas of the city step-free, and the waterbus service (which is accessible) running limited routes.

Now though, all that might be set to change. Venice authorities have vowed to make the city’s main sights accessible to all, with a wheelchair-friendly route from the city’s main entry point to the iconic St. Mark’s Square.

The ramps will connect a series of bridges running from Piazzale Roma to St. Mark’s Square.

To kick off the project, the council has announced the construction of six ramps at heavily trafficked parts of the city: four on the route to St. Mark’s, and two at other crucial points for locals. The scheme is set to cost €900,000 ($1.6 million).

Francesca Zaccariotto, councilor for public works, told CNN that the aim was “to build at least one route that permits people of all ages to go at least from Piazzale Roma [the gateway to the Italian mainland] to St. Mark’s without barriers.”

When complete, it’ll be the first time Venice has been wheelchair accessible in its history. The city is said to have been founded in 421CE.

The new route will not only be wheelchair accessible. “We have widened the plan so that everyone can do it without problems, including blind people, which wasn’t in the original plan,” said Zaccariotto.

Venice’s bridges make it insurmountable for many visitors with mobility issues.

“We are doing interventions on bridges, making steps easier to climb, and adding non-slippery surfaces that make everything more navigable.”

Venice is a tricky city to update, she said, because of strict rules around changing its cultural heritage. But, she said, the aim is to become “an example of accessibility for people with mobility issues.”

Wheelchair users have hailed the move. British sculptor Tony Heaton, who’s often in the city for work, called the current situation an “access nightmare” but said the planned route would be of “huge significance.”

“It always feels like Venice always looks away when thinking of wheelchair users, falling back on the ‘ancient city’ rhetoric,” he told CNN.

“I have struggled through the city with various helpers carrying the wheelchair over the years. Trial and error means I have a good idea how to get around and when to use the vaporetto [waterbus], but it is an access nightmare and could be much better with some joined-up thinking.”

In 2016, two enterprising gondoliers created a wheelchair-accessible gondola at their own expense. However, the Gondolas4all project is currently in stasis due to lack of funding.

Heaton added that the ramps would be “liberating for the older and disabled residents of Venice, who often feel trapped.” In the past, he has held accessibility discussions at the city’s Biennale art exhibition, and talked to locals about their experiences.

The bridges have been designed to be non-slippery and silent, too.

Five bridges will be equipped with ramps in the first stage of the project. The Ponte de la Croze, near Piazzale Roma, will be the first. It will link up with other bridges which already have ramps, allowing step-free access through the Santa Croce and San Polo areas to the vaporetto stop of San Toma.

From there, people must take the vaporetto across the Grand Canal (free for wheelchair users) to San Samuele, where the route continues across the Ponte dei Frati, connecting the squares of Santo Stefano and Sant’Angelo.

From there, the route goes past the famous Fenice opera house — “It’s an important place that needs to be accessible to everyone,” said Zaccariotto — and into St. Mark’s.

There’s only one spanner in the works — one bridge near the Fenice, the Ponte Vecia Malvasia, will not have a ramp in this first round of construction. The authorities are working on a solution which satisfies those in charge of heritage preservation, in order to make the route fully accessible.

As well as the St. Mark’s route, steps leading from the Campo della Misericordia square to the Fondamenta della Misericordia — a nightlife hub — will also get a ramp. Another will go on Giudecca island, just off the Palanca vaporetto stop, a residential area increasingly popular with visitors.

Ramps in the city have already gone down well with residents and visitors alike.

Ramps aren’t new to Venice. For the past six years, temporary ramps installed for the annual marathon have been left for most of the year in places such as the Zattere waterfront in the Dorsoduro district, and on the Riva degli Schiavoni, the world-famous waterfront outside St. Mark’s.

But Heaton said they’re not ideal. “They’re usually crowded with the non-disabled taking photos from them and blocking them,” he said.

As well as the new bridges, the authorities will replace the temporary ramps already in place, said Zaccariotto. The first permanent one, which will go on the Riva degli Schiavoni, is already being built, she said. “We’ve perfected them based on the experience of [the ramps on] the Zattere, changing the surface, using material that guarantees no noise, so improving the acoustics, aesthetics and slipperiness,” she said.

The plans for the new bridges will be passed by the executive, and then will be put out for tender. The idea is to complete the project within months.

“It would be a huge message to other places which fail to address access — they will be left with no excuse,” added Heaton of the proposed plans.

“If Venice can do it, everywhere can do it. It just needs political will.”

Two companies have luxury trains called the ‘Orient Express.’ Here are the differences
The Other Black Friday: Do Your Part To Put Hunger Relief In The Black
Budget Friendly Ski Slopes for 2023
Holiday Gift Guide 2022: The Best Kitchen Gifts For Food Lovers
The best restaurants in Wengen