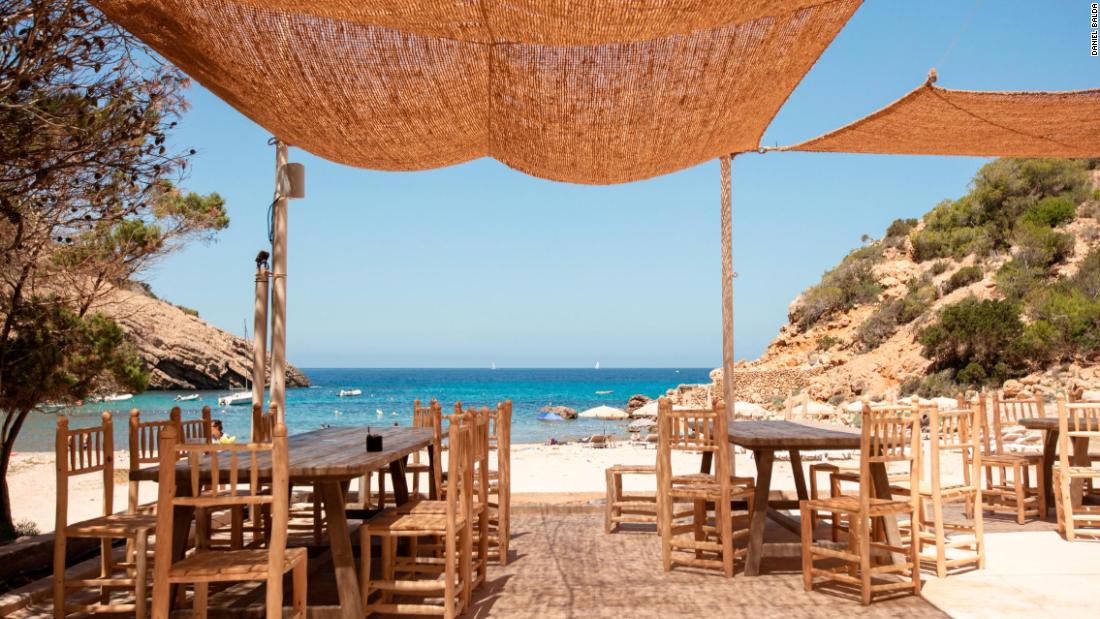 Ibiza, Spain (CNN) — In the run up to summer, Ibiza’s nightlife empresarios were optimistic that the White Isle could fully reopen safely, but despite their best efforts, its hedonistic day-and-night dance super clubs remain bereft of fluoro-clad ravers.

Travelers heading there now will have more daylight hours (and energy) to explore.

Historically, this 220-square-mile island off Spain’s east coast in the Mediterranean — called Eivissa in the local Catalan dialect and part of the Balearic group — was populated by Romans, Arabs and the Spanish, although it remained relatively poor and focused on local trades such as fishing, farming and crafts until the advent of large-scale tourism in the 1950s.

In the ’60s and ’70s, the island saw an influx of bohemians — an influence still evident at the island’s hippie markets Punta Arabí and Las Dalias, community farming initiatives and in its club culture, which evolved from early gatherings in open-air settings where costumes, nudity and hedonism were encouraged.

Today, the bohemian vibe is paired with a decidedly lavish, see-and-be-seen crowd — or used to be.

Large-scale events have been shuttered due to the ongoing pandemic, although visitors seeking spiritual pursuits can still cloister in private settings and world-renowned DJs have transitioned to hosting more intimate private affairs, including music-led excursions by yacht. But for restaurants and beach clubs — those serving food at clearly defined tables or cabañas — it’s business as usual, and exploring the island’s many great places to eat and drink, some new for the season, is a great way to pass the time.

Iconic Parisian brand Silencio launched its Ibiza outpost, El Silencio, on Cala Moli on the island’s west coast in June. A partnership with ToShare, a restaurant concept by chef Jean Imbert and artist-entrepreneur Pharrell Williams, the beach house seeks to invoke the structure’s 1970s roots, offering opportunities for connection and creative inspiration through events, talks, performances, pop-ups and other cultural programming throughout the season.

Next door to the open-air, sand-floored restaurant — where diners can nibble on eggplant and grilled octopus with blistered padron peppers at sunset — artist Miranda Makaroff’s striking large-scale immersive installation, “The Octopus Visit,” is inspired by an encounter the artist had while spending a day on nearby island Formentera. Directeur d’Ambiance Arman Naféei — who worked with LA’s Chateau Marmont — is overseeing music direction for the beach house and will also record his popular interview podcast “Are We On Air?” on-site.

Six Senses Ibiza on Cala Xarraca, which has achieved BREEAM-certification for the buildings’ environmental sustainability, is also new for 2021. Emphasizing mindful travel, it taps into the wild northern coast’s boho, community-minded vibe — this part of the island, particularly, has attracted a stream of free-spirited artists, creatives, musicians and mystics over the decades.

The Six Senses’ almost 13,000-square-foot spa incorporates massage catacombs with direct access to the organic gardens and is anchored by an anti-aging program with revolving treatments by visiting practitioners. Its farm is set within a 400-year-old olive press and agricultural estate, where guests are invited to participate in the growing of food for the property’s restaurants, overseen by celebrity chef and pioneer of new Israeli cuisine, Eyal Shani.

Local food and a focus on well-being

While these outlets are new, the philosophies that underpin them are not: over the last few decades, alongside developing a reputation as a hedonistic clubbers haven, Ibiza has also become a magnet for anyone seeking restorative, upscale experiences which emphasize nourishing creative connections as much as locally produced food.

Tourists take in views of the port of Ibiza from the top of the Old Town on July 16, 2021.

The diminished number of visitors to the island hasn’t made it any easier to get a reservation at the island’s more popular spots, many located along narrow, unsigned dirt trails that will have you asking “are we sure we’re going the right way…?”

Laidback-chic chiringuito (seaside restaurant) Cala Bonita, perched in a rocky cove and more a destination for its whole grilled John Dory than its quaint beach, is worth trying to book ahead or begging for a table.
Open-air agritourism spot La’Era, tucked in the hills with a menu featuring wild caught rockfish and fresh greens from the garden, was blissfully empty recently as the moon rose over the property’s clutch of villa accommodations and mirror-like pool.

Boutique agroturismo properties — typically comprising a handful of rooms and a restaurant set on old ranches or farmland — have long been popular among wellness-conscious visitors and residents, now gilded with another veneer of pandemic appeal due to their seclusion on the island’s interior and low guest numbers.

The casitas and villas at Can Sastre are cocooned by lush foliage, olive and orange trees.

The magic lives on

Another setting where a lack of heaving crowds is evident and appreciated: the labyrinthine streets of UNESCO-listed fortified historic settlement Dalt Vila, which translates to “Upper Town” but is usually referred to as “Old Town.”

It’s a delightful place to spend a few hours: the town’s narrow cobbled alleys and streets are flanked by a mixture of whitewashed houses, small boutiques selling locally made broderie Anglaise cotton dresses, kaftans and shirts, and intimate bars and tapas spots doing roaring trade in sangria and small bites.

“Magical” is an adjective you hear a lot to describe the island’s myriad charms. Mystical rock Es Vedra is rumored to be magnetic (although sadly, this was disproved) and to be home to characters from Greek mythology. There were no sirens to be seen — bikini-clad Europeans aside — during a recent sunset where onlookers gathered on the scrubby hillslope, part of a socially distanced crowd who were variously meditating, doing yoga or just sitting peacefully as the sun dipped below the horizon. But it still felt pretty special.

People gather at sunset at the Es Vedra viewpoint on July 16, 2021.

And for something more up-tempo, plenty of spots will provide a Balearic Beat fix.

Ibiza institution Pikes, a 25-room boutique hotel frequented by dance music and rock and roll icons — it was the location for Wham’s “Club Tropicana” video — hosts regular events (and a stellar weekend brunch).
At beachfront “restaurant” Nikki Beach in Santa Eularia, daybeds provide immediate access to a pool that slowly becomes more packed with revelers over the course of the day, enjoying the breeze from the ocean as the DJ plays their way through retro Tori Amos and Roger Sanchez remixes.

Until the searchlights of Pacha and Amnesia start tracing the skies, luring clubbers like moths to a flame, it’s places like this keeping Ibiza’s party pilot light burning.