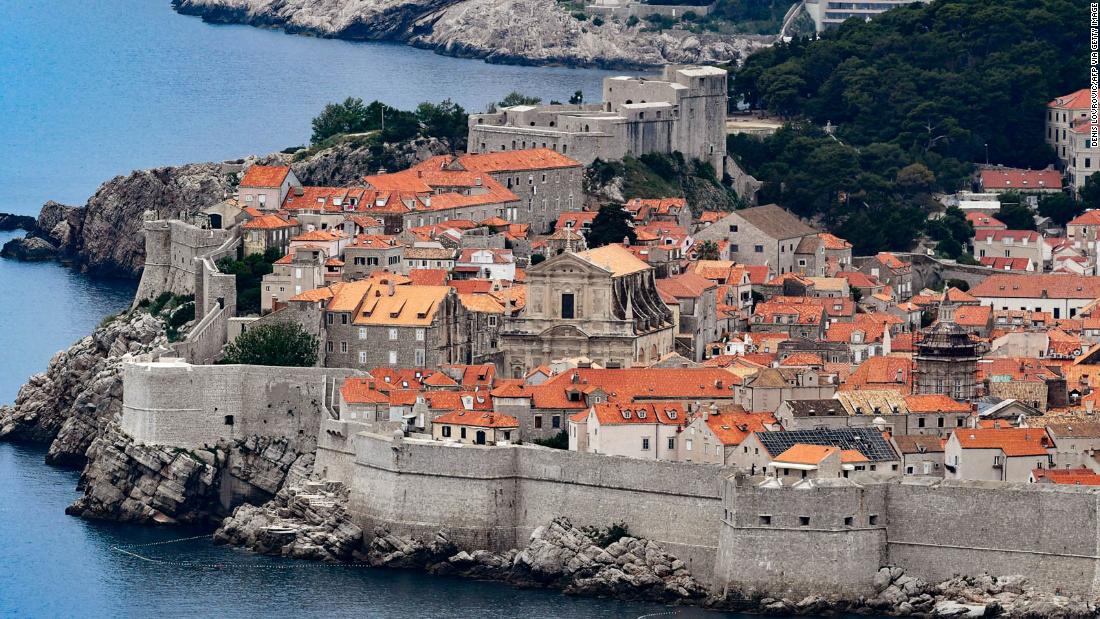 (CNN) — Lord Byron called it the Pearl of the Adriatic when he passed through on his Grand Tour in the early 19th century.

Fast forward 200 years and the mighty walled city of Dubrovnik still stands as a symbol of strength and stability in a region that has seen its fair share of upheaval and darkness.

Now, it’s preparing itself for the return of visitors after more than a year of pandemic-enforced closures. Having endured the depredations of overtourism, its people and businesses are plotting a more sustainable future that places history and tradition of the city at the forefront, without compromising its sheer beauty.

While the Covid nightmares of 2020 and 2021 might previously have been unimaginable to so many, Dubrovnik has a long and storied past when it comes to dealing with highly infectious diseases.

In 1377, when the city was at the center of the maritime republic of Ragusa, its rulers decreed that sailors, merchants and traders arriving from areas where the plague had been rampant should be sent to dedicated quarantine facilities.

Prepared for the pandemic

“Almost 800 years ago we knew everything about quarantine,” says Ivan Vukovic, one of Dubrovnik’s leading tour guides. Vukovic explains that arrivals from areas with high caseloads were initially sent to the small islands Mrkan and Bobara, just off the coast, where they would spend a month in isolation.

By the 17th century, officials had built the now famous Lazarettos of Dubrovnik, hulking, prison-like facilities where many arrivals were isolated in a bid to prevent widespread infection. It all sounds painfully familiar to these days of hotel quarantine, albeit without the luxuries of a proper bed and internet access.

Vukovic explains that the Republic of Ragusa’s location between east and west meant sailors and traders would come to Dubrovnik from all over the world.

“Only the people who came from infected areas or suspicious areas [had to quarantine],” he says, in an echo of how many countries now guard their borders. “If you got a plague outbreak happening in the Middle East, all those travelers would be isolated inside the Lazarettos.”

Dubrovnik’s Franciscan friary was thinking up innovative ways to limit infections back in the Middle Ages.

“When it comes to [Covid-19], we are actually treating it [with] the rules of the Middle Ages. History repeats itself.”

Further reminders of Dubrovnik’s medical history can be found at the Franciscan friary, right in the heart of the city. Its pharmacy dates back to 1317, the oldest of its kind still functioning in Europe and key to Dubrovnik’s ability to survive the worst of the plague.

Friars devised smart ways to dispense their potions, with draws and partitions used to shield patients and pharmacists. Payments would be dropped into a dedicated box and left for 10 days in a bid to prevent infection. A 14th-century form of contactless payment.

While pandemic reminders abound, Dubrovnik isn’t just a place to learn lessons about infection control we could all have done with in early 2020. This is a place deeply proud of its Croatian traditions and one which is using them to heal wounds and get past the trauma of the events which rocked this part of the world in the 1990s.

Protecting centuries-old beauty and tradition is part of Dubrovnik’s identity.

The centuries-old Linđo dance remains at the center of life here, as Jelica Čučević explains.

Čučević has been dancing the Linđo since 1980 and today is part of the Linđo Folklore Ensemble, which showcases these tricky moves to the tourists who come to explore Dubrovnik and its past. Naturally, those who take it seriously need to wear traditional costume to fully experience its joys.

However, 30 years ago the mere act of dancing the Linđo posed serious, life-threatening danger for Dubrovnik’s citizens. When the Yugoslav army laid siege to the city from October 1991 to May 1992, snipers picked off innocent victims walking the streets. Meeting to dance was challenging and near impossible.

“It was very dangerous to walk in that time through the streets, but somehow, in that time… we found a way to send a secret message, you know, that we’re going to meet at two o’clock in the afternoon at a well-known place,” says Čučević. She was, she says, young and somewhat fearless, as were many other dancers, and refused to see their much-loved tradition destroyed. Her strength and fortitude speak to a wider feeling of community in Dubrovnik.

“There is a deeper connection that is a part of our tradition. These are our roots, so it’s very important to keep them going from generation to generation.”

The seaside site of King’s Landing from “Game of Thrones” is also home to a vibrant and storied sailing culture.

While the old walls of Dubrovnik betray little of that time, it doesn’t take long to find monuments to that most challenging of periods in the city’s history. And none are more stark or fascinating than the Belvedere Hotel.

This once opulent location, set high on the cliffs above the azure waters of the bay, was home to Croatian refugees who came to Dubrovnik to escape the advance of Serbian soldiers. It was destroyed during the brutal months of the siege and, in the 30 years since, has remained in that same ruined state, a stark reminder of just how much Dubrovnik suffered at that time.

The Belvedere was only open for six years before the siege, but in that short time had gained a reputation as one of Europe’s finest hotels.

“It was the best in the Adriatic, as I remember it as a kid,” says Ivan Vukovic. “It had everything, from the outdoor pools, you could go to the beach, my mother went shopping [there], my father went to the restaurants with his friends.”

Today, nature has recolonized the Belvedere, with mature trees growing from the brickwork. The views from the one-time suites remain every bit as spectacular as they were in the early 1990s, though. Yachts slip by, the horizon dotted with beautiful islands, the water sparkling in all its glory.

“It’s nice to have it as a reminder how we got our own country, as an independent one from the ’90s, and also to see what was happening here, because people have to learn the mistakes,” says Vukovic.

An end to overtourism?

Lockdowns gave locals a chance to reconnect with Dubrovnik. Now they’re ready to remind tourists why this Croatian city is called the “Pearl of the Adriatic.”

UNESCO status couldn’t protect Dubrovnik’s Old Town from the attention of mortar shells and gunfire. But in the decades since the war and independence, its spectacular walls and fortifications have helped turn it into one of Europe’s hottest tourist destinations, not to mention the set for big-name TV shows such as “Game Of Thrones.”

Pre-pandemic, locals were struggling with the sheer numbers of people coming here, pouring off cruise ships and causing major congestion.

Around a million cruise passengers were arriving in the city every year, with up to 9,000 a day filing through the narrow streets. In 2019, officials went to the extreme lengths of placing an effective ban on new restaurants, closing 80% of souvenir stands and limiting cruise ships to just two per day.

As summer 2021 got underway though, all was quiet. And for restaurateur Darko Perojevic, the change of pace, despite the challenges of Covid, has meant he’s been able to enjoy his home in the heart of the city once more.

“I would never leave the Old Town, this is Dubrovnik!” he says, gesturing to the buildings which used to draw in so many visitors. “The Old Town is Dubrovnik. I mean, if you go to other neighborhoods, to me that’s not… it could be Split, it could be Zagreb or I don’t know… Oakland. You know it’s all the same. What makes Dubrovnik is the Old Town.”

Despite Perojevic’s Azur restaurant relying on tourists and its status to many as a living museum, he is keen to remind tourists that it’s a place where people have roots.

“It’s also home to people living in the Old Town like myself,” he says. “So I see this as my living room.”

Locals have been reclaiming the streets of Dubrovnik from tourists during the pandemic.

“My fear is we go back to the pre-Covid thing, mass tourism, and just too many people,” he adds. “It’s bittersweet. We got the city back to ourselves, but you know, financially it’s going a little bit down… I think that we learned a lot, and I think that we will definitely reset some things and we know where we don’t want to go.”

Darko believes that the pandemic has given him and other locals the chance to approach tourism in a new way. He is, he says, optimistic for the future.

While the Old Town defines Dubrovnik, so too does the sea. It’s obvious from the city’s place on cruise ship itineraries and the superyachts moored across the bay that the water is a key part of its charm. But that love goes back centuries, to when traders sailed here. Today, locals with small vessels enjoy nothing more than tacking out and enjoying the peace and quiet of the ocean.

“For us it’s always like part of living,” says Dado Butigan. “It’s just… you go on a boat, you go for a swim and that’s it. It’s part of our DNA because we are blessed with this coast and with the sea and everything. And you just need to use it.

“You feel peace and quietness when you open the sail and you just hear the wind and the waves and a couple of birds. You just feel relief… It’s like true happiness, I would say.”

To get an even greater sense of just how many boats and yachts enjoy this watery paradise, it pays to ride the Dubrovnik cable car to the top of Srd Hill. Here you can see the majesty of the Old Town and the sweep of the sea.

From this vantage point, Dubrovnik looks like a toy town. Something you just want to scoop up, put in your pocket, and take home. Picture perfect in every way. It is, most of all, precious. It’s remarkable to consider what it has endured in both ancient times and modern, and that it still stands proud.

Travel companies are ‘greenwashing’ — here are 3 ways to find ones that aren’t
Not a fan of cruising? The hack that could change your mind
Wine Industry Report Offers Insight Into DTC Sales In 2023
Damen Yachting launches SeaXplorer 58
The best spa hotels in Manchester