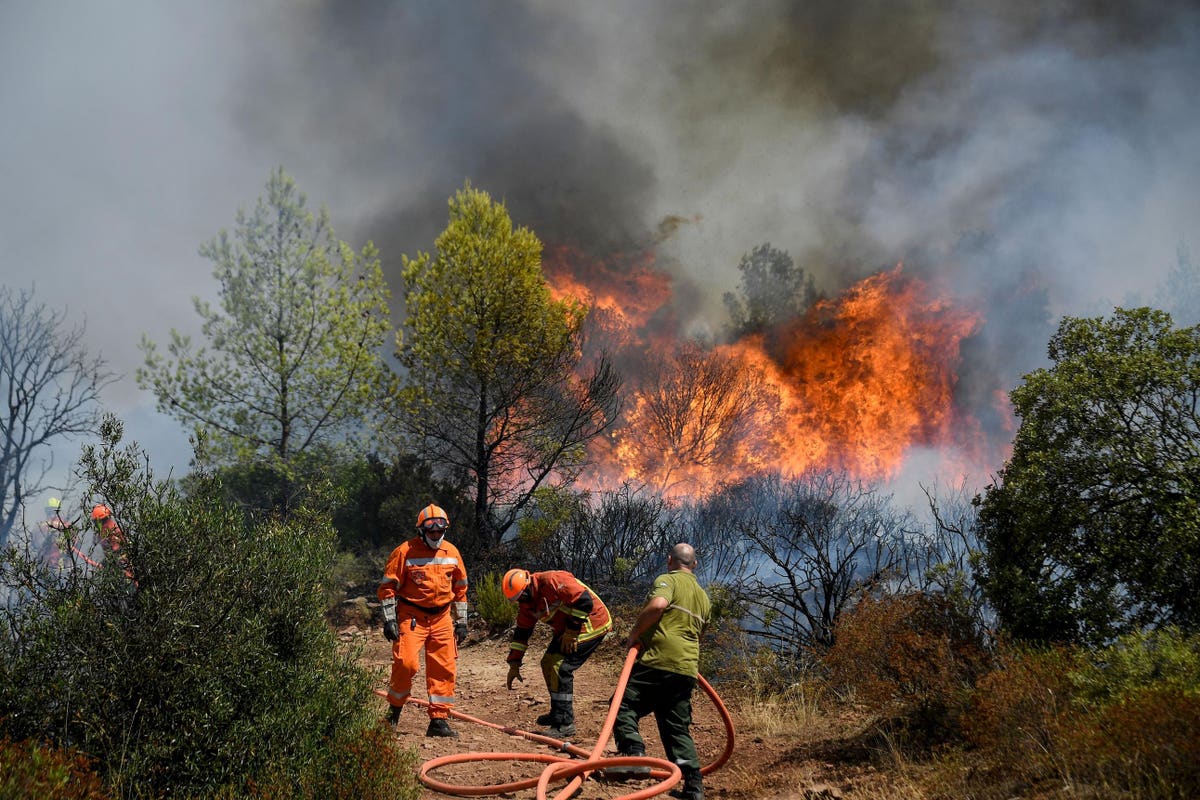 A massive fire broke out on the morning of Monday, August 16th in France’s Var department in the Provence-Alpes-Côte d’Azur region. It is possibly believed to have been caused by a cigarette tossed at a roadway rest area near Gonfaron (though this is still under investigation) and magnified by the intensity of the Mistral wind, strong and dry as it blows down the Rhône Valley from the north towards the Mediterranean Sea.

It has burned more than 7,100 hectares (17,500 acres), with a human toll of two dead and dozens injured. “The fire is fixed, not under control,” said Evence Richard, prefect of the Var at a press conference this morning. “The head of the fire is no longer moving.” Forces of more than 1,200 firefighters along with firefighting aircraft and engines tended to the blaze.

Portions of the Côtes de Provence winegrowing appellation were damaged in it’s wake, including British-owned Maison Mirabeau, located in Cotignac. In a statement on social media, proprietor Jeany Cronk reported that the full impact to their domaine is still being assessed, but that “everyone from Mirabeau, the animals, and the houses” were safe. Cronk credits the local firefighters and their own farmer, “who refused to back down to the fire under very tough circumstances during the night.”

Thousands of people were evacuated as a safety precaution. Reports from two other winemaking properties, Ultimate Provence and Château des Bertrands, both owned by MDCV Provence, indicate that teams from the estates made themselves available to firefighters during a 24 hour shutdown of these domaines.

The fire is still alive in the nearby Plaine des Maures Nature Reserve, which is home to a variety of flora and fauna including over 200 rare species. Of particular concern is the Hermann’s tortoise, a population that was ravaged in 2017 fires that occurred in the Var.

The Potential Impact of Fire on the Wine Industry

It’s too early to state the influence, but the industry is watching for clues. These fires come at a time when other areas of the wine world are facing similar challenges, prompting discussion on how growing regions can prevent, suppress, and mitigate fires.

The financial impact is significant. Look to California for a recent lesson — in 2020, fires were estimated to cost the local wine industry $3.7 billion, according to data from Gomberg, Fredrikson & Associates, in partnership with Wines Vines Analytics and BW166.

While the obvious, immediate impact is burn damage or destruction, concerns about smoke “taint” also plague the industry. Red wine in particular, which gains color and flavor from contact with grape skins, is particularly vulnerable. This form of damage can be less obvious initially, requiring sample fermentations and lab analysis to determine the best approach for the harvest and production of grapes. With vendage (harvest) in southern France just getting underway this time of year, vintners will be left to make assessments, if their grapes were exposed to smoke.

The overall 2021 French grape harvest is already expected to be reduced by frost that hit in spring, after unseasonably warm temperatures had already prompted bud break, destroying tender, exposed vegetation. While the most significant impact was north of Provence, some growers there reported damage earlier this year.

Meanwhile this week, vineyards and olive groves were damaged in a fire in Beaumes-de-Venise in the Vaucluse department and vegetation was burned in the Aude in Occitanie.