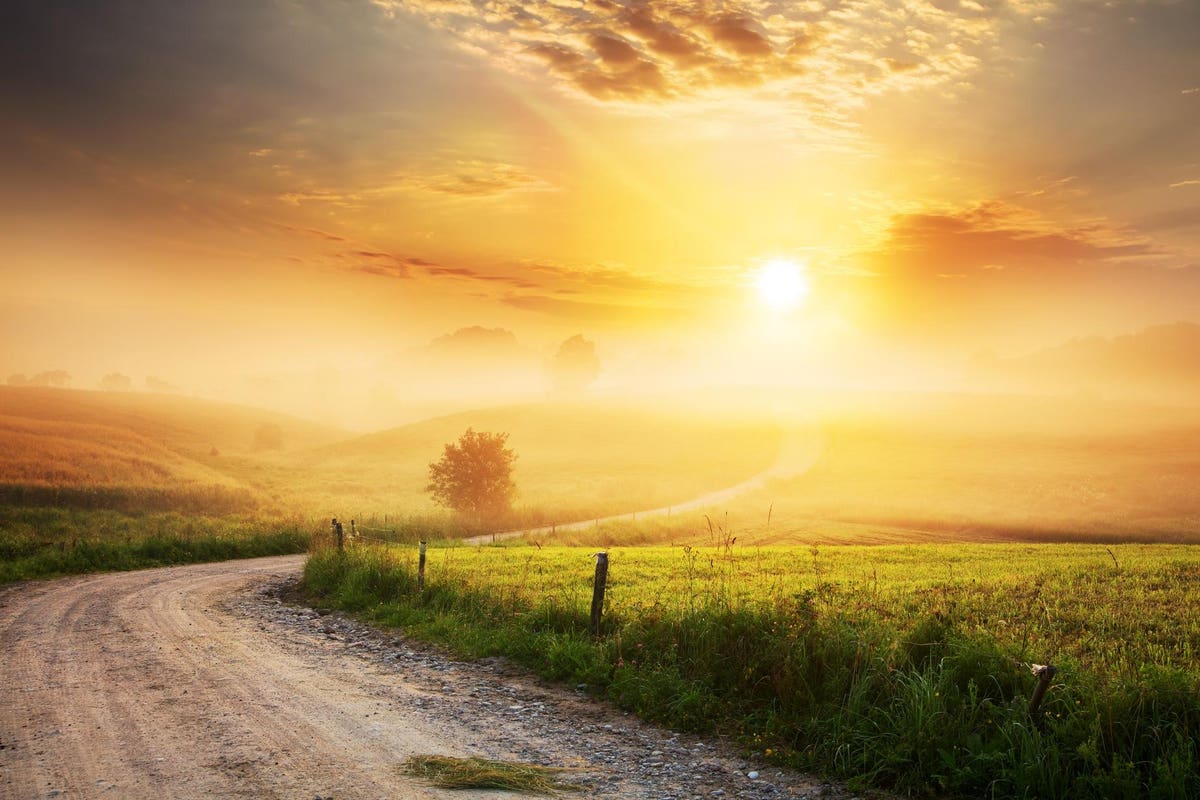 The golden sunrise revealed thick fog that slowly rolled over Mount Tamalpais as Chris Kajani stood on her winery’s terrace watching this “miraculous” sight. The wine estate she runs, Bouchaine, is tucked away off the beaten path of Napa Valley in the cooler climate area of Carneros. The remarkable difference between Carneros and other parts of Napa, such as St. Helena which is barely a 40 minute drive north, would sometimes include days that had over a 20 degree difference. When the fog starts to cascade onto her mainly Pinot Noir and Chardonnay vineyards it leaves moisture that enveloped the leaves and grapes in its wake yet that moisture quickly evaporates in the accompanying wind. The fog is part of the energetic flow that starts in the San Francisco Bay, is further powered by the San Pablo Bay and Napa River to find itself among the Bouchaine vines, completely changing the sense of place in comparison to its non-Carneros Napa neighbors. Still, to this day, it remains an experience that is beyond her wildest dreams when she first contemplated leaving the biotech world for a life devoted to making California wine.

A major career change doesn’t always work out the way one thinks; the images that presents themselves in one’s head while fantasizing about a dream job does not always come to fruition. But for Chris Kajani, the landscape that surrounds her job as winemaker and general manager of Bouchaine gives constant chills up her spine with the small miracles she witnesses throughout the growing season. The combination of the consistency of the fog balanced with the erratic climatic bursts such as hailstorms gives her a life that is filled with dependable wonderment and electrically charged challenges that demand swift action; a life that is at once enchanting and thrilling.

Although Chris is a proud Napa Valley native who was raised with a father who loves to collect Napa wines as well as her getting the opportunity to travel to Europe and experience the wines there, she never knew that one could make a living in wine. So she worked in biotech for years until she met a winemaker named Ed Kurtzman who has an impressive resume working with top Pinot Noir wine producers throughout California. But besides the great resume, he is also an incredibly hard worker as he drove a cab in San Francisco while getting his winemaking degree in Fresno, and so despite Chris not being born into a winemaking family, Ed was a great example of someone who came from a humble background and through relentless hard work became a well-known figure in the industry. “Ed talked me into this,” explained Chris and she said that he let her do a part-time harvest at Testarossa, a Pinot Noir and Chardonnay producer in the Central Coast, so she could see for herself if the winery life was for her.

Chris was bitten hard by the wine bug as she was fiercely determined after her Testarossa experience to get into one of the most prestigious winemaking universities in the country, U.C. Davis. Chris already had a degree in science as well as a recommendation letter from Ed Kurtzman so she knew the next step was to let the Davis admissions committee, for the viticulture and enology graduate program, know how committed she was to joining their program. “I literally stalked them and audited all the classes as I really wanted to get in the first time,” Chris said with a laugh.

She ended up interning at Pahlmeyer which made wine from Napa and Sonoma vineyards planted with Bordeaux varieties as well as Chardonnay and Pinot Noir and Chris said that the wines that blew her away the most were always the Pinot Noir wines as they were “light, bright and graceful”. Then she joined Saintsbury in 2006 and it gave her a chance to work with various vineyards throughout Anderson Valley, Sonoma Coast and all over Carneros. She happily stayed there for almost nine years until a beaconing light from the Bouchaine owners called to her. And before Chris knew it she was having a six hour conversation at their home in Delaware with the owners, Gerret and Tatiana Copeland, and at one point Mrs. Copeland looked at her and said, “Chris, you have already made wine and you could be doing that forever but what if you could run the winery? What if you did it all?” It was like being hit by a lightening bolt and even though she never envisioned being the general manager of a winery, Mrs. Copeland made that vision come alive for her in that moment.

One big passion that Chris and the Copelands shared was rooted in Pinot Noir and the importance of site. Gerret and Tatiana Copeland both have had a long-lasting passion for Burgundy Pinot Noir wines; Gerret’s French-descended American family built the DuPont Company (his father, Lammot du Pont Copeland, was DuPont’s 11th president) but more importantly in this context, his father and mother loved French wine. Gerret fell in love with Burgundy wine during his first trip there with his father when he was only 16 years old. Tatiana came from a great legacy of artistic and independently minded Russians as her great uncle was the legendary composer Sergei Rachmaninoff and her grandmother was the first woman to drive a car through Moscow’s Red Square. Tatiana ended up coming to California for undergraduate and graduate school and by means of a successful business career she would meet her future husband Gerret Copeland and together they would try to make their wine dream come true. In the 1980s it was impossible to buy in Burgundy so Tatiana sought out a property for them to buy in California which led her to what would become the Bouchaine estate.

The estate was not much to look at in 1981 as it had a couple of dilapidated buildings yet the feeling of being nestled among a hidden natural wonderland instantly won Tatiana over although the question of whether it could produce high quality wine was not answered as the Carneros area in Napa was not the well-known name that it is today. But her friend, André Tchelistcheff, who happened to share her Russian heritage as well as being America’s most influential post-Prohibition winemaker came out with her and when he saw the land and the fog he said that it was the ideal place for Pinot Noir… and at that moment it was meant to be as that was their dream wine to make.

“Before I started in wine I couldn’t tell you what the weather was like,” Chris said with an introspective look on her face. But since her first full-time harvest in 2004, she can remember every aspect of the growing season and the recall of it is just as vivid and emotionally vibrant as if she was reliving it in real time. Today she is completely engaged and connected with the symbiotic relationships that pulsate among the nature that surrounds her and she had the same impassioned wave of feelings that Tatiana had the first time they each experienced the Bouchaine property – part of the magic of the wines is the experience of the place. Of course the challenges of the Covid pandemic has made it difficult to share this special property but Chris says that she can always count on the Copelands to support them in any of the fun ideas they come up with and the more out of the box it is the better so they were able to adapt pretty quickly; whether it is doing special bottlings of wine, planting a small section of an atypical variety for the area or in the case of the pandemic, investing in all the equipment to do online tastings with their customers, the Copelands are always there to give them what they need.

During these trying times everyone needs to know there is still plenty of magic to be had in life and many have experienced how easy it is to get lost in the darkness when the magic seems to have completely disappeared. Chris herself, who feels that giving visitors this incredible experience is the best part of the job, desperately missed hosting real live people when things were in lockdown. But as life is slowly getting back to normal, it makes the moments of having people come out mean that much more and reinforces the notion that she has gone down a path that brings beauty, conviviality and much needed escape to people’s lives. And it all started with a random conversation with a Pinot Noir winemaker who introduced her to a world that she didn’t even know existed and then it was just up to her to fully commit to making that leap… a leap that she could have never imagined would ultimately help to keep the magic alive for herself as she still witnessed the copper tinted fog roll in, even during the darkest of times.

2020 Bouchaine, Vin Gris of Pinot Noir, Carneros, Napa Valley: 100% Pinot Noir grapes where 95% is whole cluster pressed and 5% is saignée. Purple flowers with wild strawberries on the nose and lots of energy, high acidity with a touch of texture that gives it shape with stony minerality on the finish. 720 cases made.

2018 Bouchaine, Estate Pinot Noir, Carneros, Napa Valley: 100% Pinot Noir. Multi-layered nose with smoldering earth and black cherry that is intermixed with cardamom pods and forest floor that has bright acidity and round tannins. 3,100 cases made.

2018 Bouchaine ‘Swan Clone’ Estate Pinot Noir, Carneros, NapaValley: 100% Pinot Noir from the Swan Clone. A stunningly pretty, perfumed nose that was lithe and light on the body like a ballet dancer and hence why this particular clone of Pinot Noir is called Swan; really elegant yet still nicely concentrated on the mid-palate with ripe strawberries that had a refreshing basil note in the background. 500 cases made.

Eat Local If You Want, But Not For Climate Reasons
Valentine’s Day Gift Guide: The Best Italian Gifts For Pasta Lovers
Fresh Take: Tyson Heir Settles With Guilty Plea, And Cracking Open The Issue Of High Egg Prices
China looks past Covid as tourist bookings surge for the Lunar New Year
Welcome To The Year Of Yaupon Tea