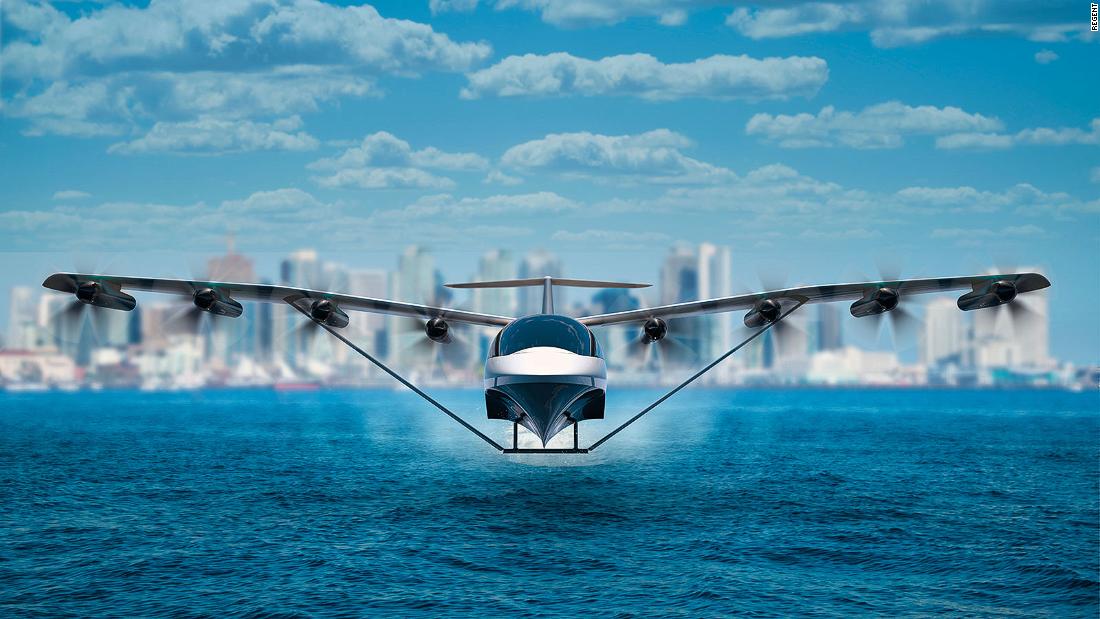 (CNN) — At a time when transportation infrastructure projects seem to be taking center stage in US public debate, a Boston-based start-up backed by some of Silicon Valley’s most prominent investors wants to turn the sea lanes along the country’s east and west coasts into high-speed transit corridors.

LA to San Diego in 50 minutes? What about New York City to Boston in two hours? And all this without road traffic or airport hassle. These are the sort of commutes that may become possible if REGENT‘s seagliders become a reality.

Regent’s founders have aviation backgrounds — including degrees in aerospace engineering at MIT and a stint at Boeing subsidiary Aurora Flight Sciences — but they turned to the seas for inspiration when they started looking for new, sustainable ways to transform inter-city travel.

Billy Thalheimer and Mike Klinker have raised $9.5 million from the likes of Y Combinator, Mark Cuban and Peter Thiel, among other investors, to reimagine the wing-in-ground effect (WIG) concept and turn it into a mainstream means of transportation with zero emissions.

They make use of an aerodynamic principle known as “ground effect” to skim the surface of the sea at very high speeds, hovering just a few meters above water. When in port, they simply let their hulls rest on water, like any other boat.

The ground effect vehicle concept isn’t new. The Soviet Union even produced some huge ones for military use, usually referred to as “ekranoplans,” and, more recently, a number of startups, such as Wigetworks in Singapore, the Flying Ship company in the US and RDC Aqualines in Russia, have been working on a new generation of ground effect craft for commercial use, both manned and unmanned.

The idea sounds straightforward, but ground effect vehicles have to deal with a number of issues that have, so far, prevented their more widespread adoption.

One of them is that, just like seaplanes, ground effect craft are very “wave sensitive”: choppy seas are a no-go and this isn’t an option if you want to run a regular and reliable commercial service.

Then you have the fact that they need a long stretch of calm water to take off; add their poor turning ability while on water and you have a vehicle that can be difficult to operate inside busy ports.

However, REGENT claims to have solved this quandary by introducing some novel elements, to the point that its founders are positioning its wing-in-ground effect craft as an entirely new category of vehicle, which they call “seagliders.”

REGENT are positioning its seaglider as a brand new category of vehicle.

The seaglider combines wing-in-ground effect and hydrofoil technologies. It’s a hybrid that preserves key advantages of ground effect vehicles while tackling some of their disadvantages.

Hydrofoils are fast boats where the hull is above the surface, connected by struts to the foil (or foils), a horizontal wing-like surface that is in contact with the water and provides lift and stability while minimizing drag.

The seaglider has a retractable foil which lets it switch between configurations, depending on what stage of the voyage it’s at. When in enclosed waters, such as ports, it will operate as a hydrofoil for more maneuverability, but once it reaches the open sea, it will retract the foil and get into wave-skimming mode as a pure ground effect vehicle. The foil will also insulate the hull from the motion of the waves during the transition stage as the seaglider accelerates into airborne mode.

The other interesting novelty is that seagliders are going to be all-electric from day one.

When working in the nascent eVTOL (electric vertical take off and landing) industry, the founders of REGENT became aware of the limitations of current battery technology. While capable of powering urban air mobility vehicles designed to operate within the confines of a city, the low energy density of today’s batteries makes it very challenging to extend the range of all-electric vehicles beyond the very short range.

This is when they switched their attention to ground-effect vehicles as a high-speed, fossil-free alternative to link major cities without needing to wait for battery technology to catch up.

Since wing-in-ground effect vehicles are considered ships, they operate under maritime regulations and do not face the same operational and regulatory constraints as aircraft.

WIGs, for example, do not have to perform a battery-draining sustained climb upon takeoff, and they aren’t required to keep a 45-minute power reserve. All together, this gives more margin for the designers to push the technology envelope.

“We are aware some entrepreneurs start by creating the product and they expect to negotiate the rules afterward, but this did not sound like a feasible proposition to us,” Thalheimer tells CNN Travel.

The United States Coast Guard is the organization that oversees this type of vehicle, but Talheimer says they’re also in close contact with the Federal Aviation Administration (FAA), since they believe it beneficial that they get involved in the process too. In his vision, ground-effect vehicles are part of larger multi-modal electrified transport networks and share infrastructure nodes with eVTOLs and long-range commercial aircraft.

Many airports are located next to water, which would facilitate, for example, different types of airborne and seaborne vehicles sharing charging infrastructure and exchanging passenger flow.

‘Six times faster than the ferry’

The founders are confident seagliders will also benefit from advances in battery technology in the coming years, which should allow them to more than double their range to 500 miles.

For the time being, they’re satisfied with being able to extract the respectable speed (for a sea craft) of 180 miles-per-hour for a range of 180 miles, which is enough for routes such as New York to The Hamptons or LA to Santa Barbara, for example.

Despite the complexities of its hybrid character, REGENT is pitching the seaglider as a relatively low-cost option operationally. The use of electric motors, which have less moving parts than internal combustion ones, is a major factor in keeping costs low.

Pricing will ultimately be set by the operators, but Thalheimer estimates tickets prices per person per trip could be in the $50-80 range for the first version of the seaglider, which will carry 12 passengers, and could drop to $30-40 once the planned 50-seat seaglider enters service.

So far the concept seems to have found a receptive market, having already received letters of intent worth some $465 million from airlines and ferry operators. REGENT has also recently struck up partnerships with Brittany Ferries and SplitExpress.

The firm expects to fly an unmanned seaglider prototype, which will be one-quarter of the real size, by the end of this year and a full-scale one by 2023.

Tequila Sales Are Outpacing Vodka
Holiday Gift Guide: The Best New Scotch Whisky Of 2022
Realise Your Dream of Owning a Superyacht with HSBC Global Private Banking
Unusual Pairings In Mexico: Sparkling Wine And Sherry With Baked Crickets And Worms
TSA sees ‘concerning’ rise in number of firearms at security checkpoints – and most are loaded