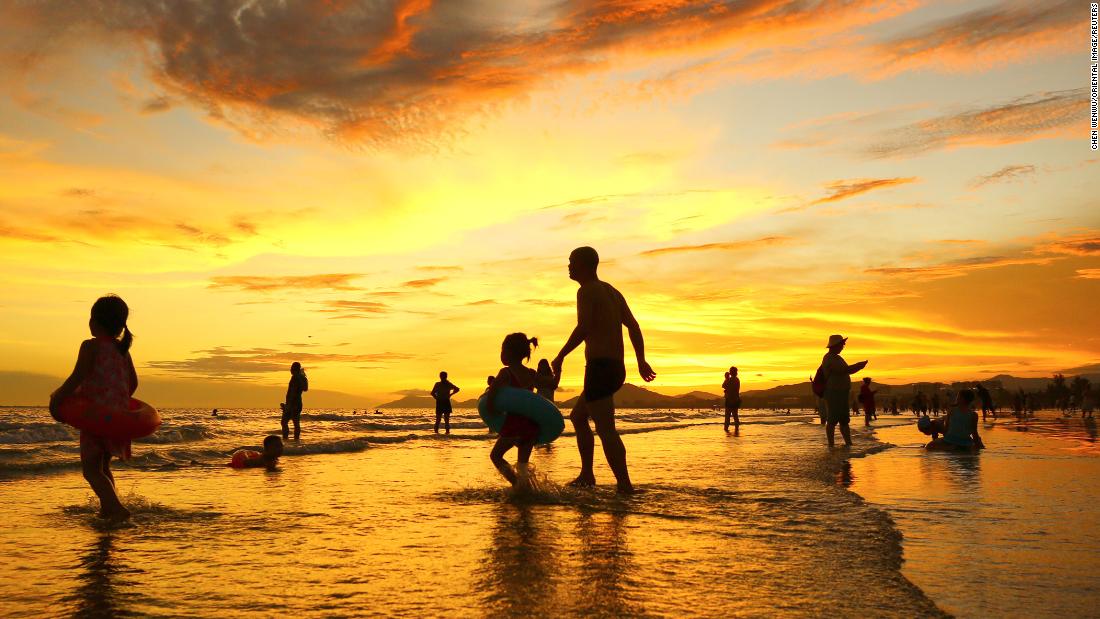 (CNN) — The sandy shores of Sanya. The mountains of Yunnan. Giant panda sanctuaries in Sichuan.

Wealthy Chinese travelers may not be able to travel internationally with ease these days, but they have no shortage of attractive travel destinations in their own backyard.

And it seems the country is readying for yet another boom in domestic travel ahead of Golden Week in October.

After more than a month of strict restrictions and lockdowns to stamp out a Delta variant outbreak, China reported no new local Covid-19 cases on August 23 for the first time since July.

Before the outbreak — which was the worst in China since 2020 — domestic travel had been on the upswing.

According to a report by the China Tourism Academy, the sector expected approximately 4.1 billion domestic trips in 2021, reflecting a 42% increase compared with 2020. In addition, the academy has projected $511 billion in revenue from domestic tourism, up 48% year on year.

Meanwhile, an annual survey of high-net-worth individuals by Chinese research firm Hurun Report found that interest in domestic travel jumped 31% year on year and 44% of respondents said they planned to increase their travel spending.

Women from the Bai ethnic group sell goods at a local market in Xizhou, Yunnan province.

“There is also social pressure and a sense of responsibility that you should not risk others by traveling abroad and potentially bringing back the virus with you.”

While international travel remains challenging, wealthy travelers are taking every opportunity to explore their home country.

“Because China is so vast. There are so many different languages, cultures and foods as well — different things grow in different regions,” Jolie Howard, the CEO of L’ VOYAGE bespoke private jet charter service based in Hong Kong, tells CNN Travel. “There is so much variety.”

According to the 2021 Hurun Report, Sanya — a tropical playground on the island of Hainan south of mainland China — is the most popular destination among wealthy domestic travelers. Often referred to as “the Hawaii of China,” it’s filled with luxury resorts, many managed by international brands.
Ranking second is Yunnan, a mountainous region home to ancient cities, forests and tea plantations.
In Western media, the third and fourth destinations — Tibet and Xinjiang, respectively — often make headlines, but it’s usually for reasons other than tourism.
The US, along with human rights watch groups and other Western nations, has accused the Chinese government of genocide in Xinjiang and severely restricting freedoms in Tibet. China has denied such allegations.
Both destinations have remained popular among domestic travelers. Xinjiang, in particular, saw an uptick in visitors after brands like H&M and Nike raised concerns about forced labor earlier this year, according to state-run tabloid Global Times.
As a travel destination, Tibet has a well-deserved reputation for breathtaking Himalayan scenery, ancient monasteries and delicious cuisine. And Xinjiang province, China’s westernmost territory, is known for its ancient links to the Silk Road trade and Uyghur culture.

“They are traditionally popular among Chinese travelers, and the rich outdoor resources have made them even more popular among elite travelers,” Mengfan Wang, Dragon Trail’s Shanghai-based manager of research, tells CNN Travel.

Outdoorsy experiences and adventure tourism have been key trends within the domestic tourism rebound, she adds.

“Rural high-end B&Bs have seen double-digit growth, especially in popular destinations such as Moganshan — an area of natural beauty close to Shanghai.”

In the 1980s, Dong Yao-hui was part of the first three-man team to walk the entire length of China’s Great Wall. Today, he’s focused on its preservation.

According to Wendy Min, Trip.com Group spokesperson, the group has seen an uptick in bookings for bucket list destinations like Shanghai Disney, Beijing’s Forbidden City and The Great Wall of China — all offering “easy, convenient travel, great cultural experiences, and top-rated accommodations.”

Safety remains paramount, along with can’t-miss experiences and attractive scenery that “lends itself to great photography.”

By land and sea

Wealthy Chinese travelers aren’t just choosing their destinations differently — they’re also changing the way they get from point A to B to C.

Driving has become the dominant form of transportation in areas such as Shanghai and Guangdong, says Wang.

“Many people will also fly into a top city (like Shanghai) and then take a popular self-driving route in the southwest and northwest regions of China,” she adds.

“This trend is highly influenced by social media and the opportunity to take photos while glamping — on social media platform Xiaohongshu, for example, users pose with Fendi handbags or Hermes blankets at their campsites,” adds Parulis-Cook.

Meanwhile, yachting has become increasingly popular in leisure destinations such as Hainan island — a longtime favorite among elite Chinese thanks to its duty-free shopping, sandy beaches and lush golf courses.

According to data from the Hainan Free Trade Port, the number of newly registered yachts in Sanya in the first half of 2021 grew 220% year over year.

Private air travel also appears to be riding a jetstream.

“We’re seeing a lot of new clients — maybe they weren’t using private jets before Covid-19 because commercial airlines were easy enough. Now, they want to travel privately because it’s safer, faster (in terms of waiting for Covid-19 tests), and you have access to all different airports,” says Howard of L’VOYAGE.

“We’ve even seen a lot of growth in terms of clients buying their own planes after chartering a private jet for some time.”

A resort in Sanya, China, scored the Guinness World Record for the largest underwater mermaid show, which featured 100 professional divers.

This pattern, she says, reminds her of the industry’s momentum after the SARS outbreak in 2003.

“At that time, private aviation got a lot of visibility and, again now, we are gaining a lot more awareness.”

And while their core customers in China continue to be business travelers, Howard has also observed a shift in travel habits.

“It’s often a combination — for example, our clients may go to Sanya for a business meeting then meet the family for a few days of holiday.”

When it comes to purely leisure travel, Howard says the company’s clientele prefer to explore far-flung locales — like Yunnan, Tibet or Xinjiang — that require a more substantial time investment.

“Before the pandemic, there were international alternatives because people could go overseas. But now, we are seeing elite travelers choosing destinations with nice clean air, beautiful scenery … like the beautiful mountains in the Yunnan area.”

“You need more than just two to three days in these adventurous places. You need time to explore, go hiking or have cultural experiences.”

“The food element is always very important for our customers because, culturally, the Chinese socialize around the dinner table,” she explains.

“A place like Sichuan is a good example since it has great food, as well as authentic ways of growing and producing ingredients. So our clients would likely want to visit an organic farm to learn more about how things are grown, get back to nature and enjoy the fresh air.”

A bamboo forest in Moganshan, China.

While high-net-worth travelers have been busy clocking miles within China’s borders throughout the pandemic, Dragon Trail says there’s plenty of pent-up demand for international trips.

Parulis-Cook expects wealthy and experienced travelers in China to return overseas as soon as it feels more manageable and socially acceptable.

“I would say for high-net-worth travelers, where travel is part of their lifestyle, it’s much less about having a newfound preference for domestic travel,” says Parulis-Cook.

“But rather, current restrictions make outbound travel unappealing in many ways. It’s not only inconvenient but also looks bad and irresponsible.”