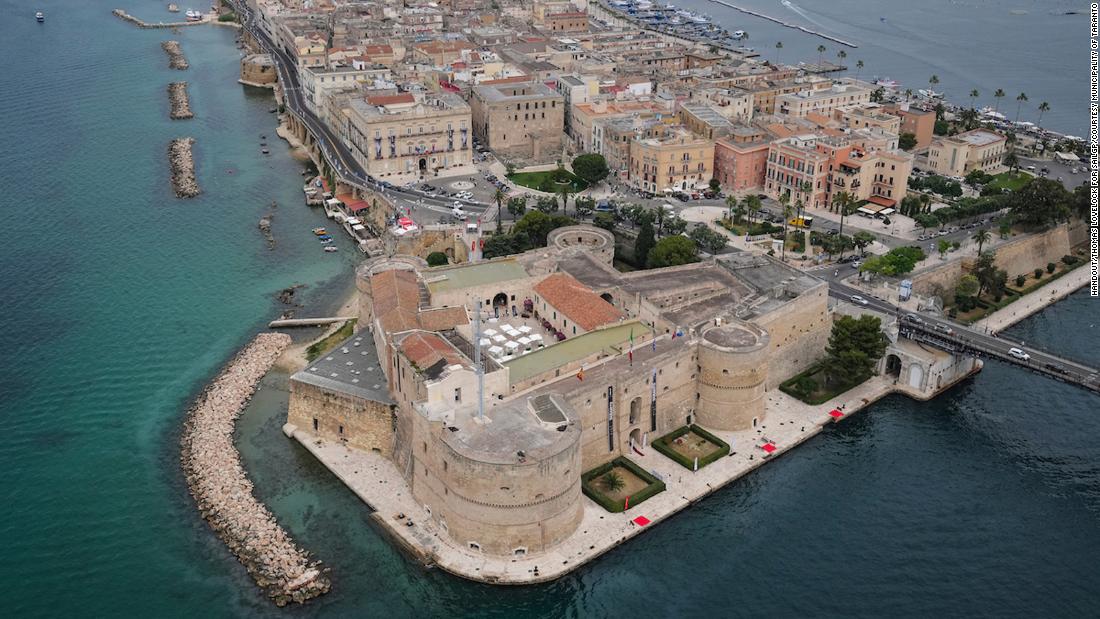 Taranto, Italy (CNN) — The Puglia region envelops the “heel” of the boot-shaped Italian peninsula. Laden with olive groves, surrounded by clear, sparkling water and speckled with charming, historic towns and villages, its rustic appeal has made it an increasingly popular destination for tourists.

The region’s list of must-see attractions includes the UNESCO World Heritage sites of Alberobello and Castel del Monte, the verdant national park of Gargano, the azure sea caves of Salento and quaint towns like Otranto, Ostuni and Gallipoli.

Absent from most such lists, however, is a richly historic and significant place.

Tucked into the instep of the Pugliese heel is the region’s second largest city, Taranto. Known as la Città dei Due Mari, or the City of the Two Seas, its heritage dates all the way back to the Spartans, who founded it in the 8th century BCE.

The city is often referred to as the capital of the ancient Magna Grecia, and it wears its Greek heritage with pride.

More recently, however, Taranto has been associated with only one thing: the Ilva steelworks, once the largest in Europe.

Built in the 1960s, the factory belched noxious fumes into the skies over the city for decades before magistrates demanded it either clean up its act or close. In May of this year the notorious plant’s former owners, Fabio and Nicola Riva, were handed lengthy prison sentences for their roles in allowing it to contaminate the city.

If the fortunes of the city and the factory have appeared inextricably intertwined, there is now a sense that Taranto not only has an opportunity to break from its recent past, but that the future for this overlooked city may be a bright one.

Rinaldo Melucci is Taranto’s mayor. The 44-year-old’s office, in the Città Vecchia, or old city, looks out towards the sea, but is not far from the steelworks that have defined modern Taranto.

“In the last 50 years Ilva not only damaged people’s health and the ecosystem, but it also damaged their mentality,” he tells CNN. “It stifled education, creativity; the factory blackmailed Taranto, and made the city believe it was dependent on Ilva. It became a yard of the factory.”

Rinaldo Melucci, mayor of Taranto, has a vision for his city.

Melucci, who took office in 2017, says he is trying to change that mentality, to show a vision of Taranto that revives the city’s old identity, and introduces a new, proud, more diverse future.

“For 2,500 years this city had a particular DNA,” he explains. “But in the past 50 years a new identity was imposed by a different ‘business strategy.’ We need to recuperate and regain what was left from that history.”

Taranto now has a €1.5 billion ($1.77 billion) war chest with which to tackle this recuperation, and the city suddenly feels alive with possibilities.

In June it hosted the Italian round of Sail GP, joining cities such as Sydney and San Francisco on the international tournament’s circuit, and in 2026 it will host the prestigious Mediterranean Games.

Much of its redevelopment work, including a brand-new stadium that will eventually house the city’s soccer team, is focused on that deadline.

Melucci has looked towards other industrial cities for inspiration, particularly Bilbao in Spain and Pittsburgh, both of which are reinventing themselves for a post-industrial future. But, he says, whereas Bilbao used Frank Gehry’s wildly flamboyant Guggenheim museum to spark its revival, Taranto’s future is more about uncovering and restoring what already exists.

One such project is the gigantic Palazzo Archita, an imposing 20,000 square meter building that dominates the modern center of the city. It has sat alone and empty among Taranto’s shopping streets like a brooding, decaying colossus for more than a decade, a symbol of the bureaucratic inaction that so often plagues grand projects in Italy.

Soon, however, it is set to reopen with spaces including a new art gallery, a library and education facilities.

“When it is restored it will change the life and the light of an entire quarter of the city,” Melucci believes, “because it is not just a building, it will be an iconic site of Taranto.”

The old city is a maze of narrow streets.

Perhaps the most significant and important project in the city is, however, a far more complex one.

The Città Vecchia, built on the original Doric platform of ancient Taranto, is a world of its own. A literal island, separated from the modern city by the idiosyncratic Ponte Girevole, or “swiveling bridge,” the old city was the area most profoundly impacted by the arrival of Ilva.

It is an extraordinary, crumbling relic. A labyrinth of ancient streets and abandoned homes, with only a tiny community remaining from what was once the city’s bustling hub.

Nello di Gregorio is a local researcher and historian. “I’m just someone who has loved, since I walked my first steps, the city that I grew up in,” he tells CNN. “I’ve studied and re-studied, discovered and rediscovered this city, because even now, after 2,500 years, its story never ends, and there are many secrets still being revealed.”

Now in his 70s, Di Gregorio has observed the decline of the Città Vecchia firsthand.

“For 30 years the old city has been literally, totally abandoned,” he explains. “Finally, new projects have been instigated, and these are very important. We’re hopeful that, within the next decade, we will finally be able to totally change the face of this area of Taranto, which is also the most beautiful, historic, antiquated part.”

Historian Nello di Gregorio in one of the old city’s underground chambers.

Among Di Gregorio’s passions are the many underground chambers that weave their way beneath the old city.

Opening a nondescript door in one of the old city’s narrow streets, he takes CNN down a series of dark, subterranean staircases, guided by torchlight through chambers, or hypogea, and tunnels, eventually leading out to the sea.

“There are 60 to 65 hypogea here,” he says, “of which only half are accessible at the moment. Almost all of them originate in the Greek age. The caves were hollowed out to gather materials to build the ancient temples, and then the medieval city, up to around 1800 AD.”

Their uses have ranged from burial ceremonies to smuggling, he explains.

The underground chambers are among many hidden assets within the old city.

Simone Marchesi, who has worked as an architectural consultant to the municipality of Taranto for the past four years, sketches out its background.

“The old city was abandoned because the new jobs that heavy industry brought made it possible for people to aspire to lodgings of a higher quality, so the old buildings in the old city became less and less attractive.”

“By the early 90s we had a situation where only a small fraction of the population of 30 years earlier still lived there,” he continues, “so most of the buildings had become empty shells, and a very sizable portion of this real estate belonged, and still belongs to the municipality.

“This gives us an incredible opportunity. The old city was left at the very margin of real estate interest for decades, so its original architecture and infrastructure are still intact. A lot of the buildings are in very bad condition, but they are still the same buildings that were developed throughout history. It’s all very authentic.”

The revival of the Città Vecchia can be a spark for wider change, Marchesi believes. “One of the main things that we’re trying to do in regenerating the old city is to ensure that we can unleash the potential that the old town’s cultural assets have, to act as a catalyst for growth.”

The city and the sea

A tall ship sails through Taranto’s Ponte Girevola into the Mare Piccolo.

Taranto’s strategy for the old city revolves around restoration, repopulation and accessibility.

Like other Italian cities, the municipality has experimented with offering €1 homes for sale on the island, almost all of which have been sold.

Bari University has taken over some of the old city’s larger buildings, while new shops and restaurants are catering to visitors.

Among those streets, CNN finds Giovanni Fabiani, a tourist visiting from Rome. His eyes light up when asked about his impressions of the Città Vecchia.

“There is nothing here that should be envious of Rome,” he exclaims. “The museum, the old city, this island, is really wonderful. I love walking in these little narrow streets and hearing their stories. Unfortunately, I don’t think it has been looked after in the way it should. Two days here, surrounded by this, is really worth it in life.”

One major project that bucks the focus of restoration is the €36 million redevelopment of Taranto’s Mar Grande waterfront — a sleek, modern walkway that will tie a ribbon along its diverse districts.

City councilor Ubaldo Occhinegro, responsible for urban planning and innovation, says the Mar Grande project will “reacquire and implement the relationship between the city and the sea, reconnecting its three districts via an uninterrupted walkway at sea level, equipped with various services and access points.”

The project will also connect Taranto’s new cruise terminal to the lower part of the Aragonese walls that circle the old city, offering a new perspective to visitors, he explains.

Collectively, the hope is that these new projects completely change the perception of Taranto, for visitors and residents alike, and unshackle the city’s destiny from that of Ilva.

The dilemma for Taranto has always been the fact that Ilva employs as many as 10,000 people. Eliminating those jobs completely would be a drastic step, but Melucci believes a compromise is possible, primarily through decarbonization of the plant.

“The idea is to emancipate ourselves from Ilva, so that it is no longer ‘the factory,’ but simply ‘a factory’. We want it to be a smaller, more modern, safer version of what it has been in the past.”

Ultimately, and perhaps appropriately for the City of the Two Seas, Melucci believes Taranto’s destiny is better focused on the water that surrounds it.

“For Taranto I see the sea, the sea, and the sea. Whatever the question, the answer is the sea,” he says. “Because the sea is our DNA, it’s been our fortune, our sustenance, our health, the games of our little children, and it will probably be our future.”

“This is a big city and you cannot survive only on tourism, on fun events,” he continues.

“You also need the factory, you need the port, you need to balance everything. We have been a yard of Ilva for 50 years; we are no longer that. This is the image we want to deliver at the end of this journey.”

The World’s Best Whiskey—According To The 2022 New York World Spirits Competition
FAA rejects Republic Airways’ proposal to reduce the hours it takes to become a co-pilot
We could soon lose our rights to proper flight compensation – here’s what you need to know
Where things stand with major Florida theme parks as Hurricane Ian approaches
Sonoma County Wine Auction Raises $1.8 Million For Charity – Totaling $40 Million Since Inception