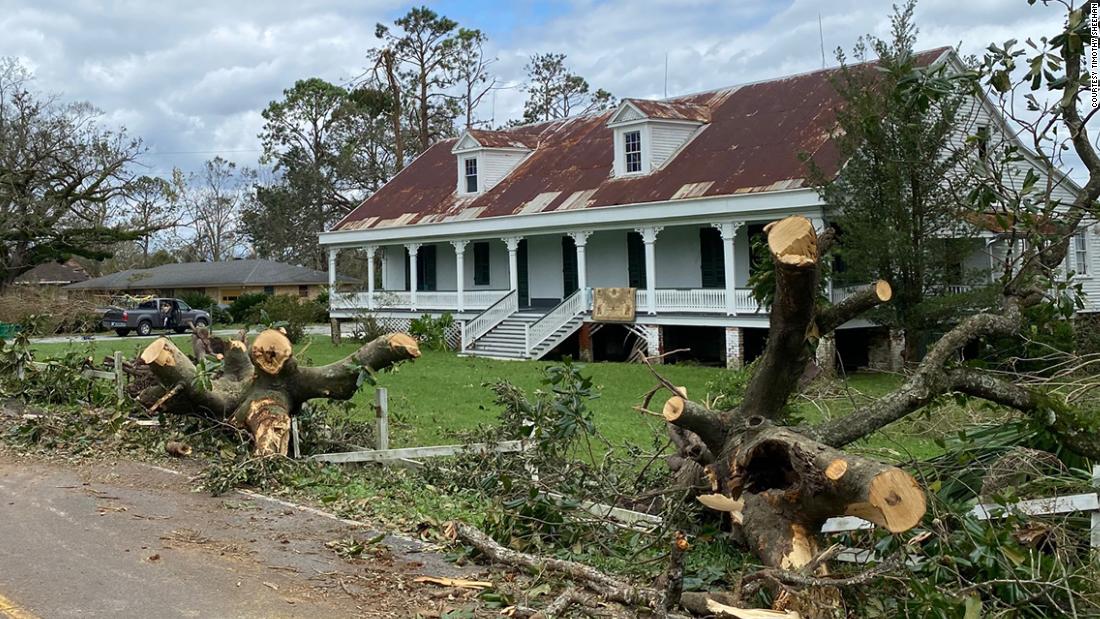 (CNN) — As Hurricane Ida barreled through LaPlace, Louisiana, on Sunday, a museum founder hunkered down in a 1790s plantation house to save irreplaceable historic artifacts.

John McCusker, founder of the 1811 Kid Ory Historic House, along with Charlotte Jones, operations and programming manager of the museum, stayed at the plantation house that dates back two centuries to the Spanish colonial era, according to the museum’s website.

McCusker, a retired journalist who has reported on many hurricanes, including Katrina, told CNN that Sunday night was the most terrifying night he’d been through in all his years of storm chasing.

“The winds really got going after dark and they howled all night for six hours straight,” he said.

He added the wind was so loud that they didn’t hear when the large barn, located across from the house, collapsed to a pile of debris.

An image taken from drone footage shows a damaged barn on the property.

Early in the night, the 58-year-old McCusker said, a window in the attic blew out, setting off a damaging series of events. The wind pushed rain into the attic, which caused brown sludgy water to drip from the ceiling throughout the house.

McCusker and Jones used tarps to cover artifacts inside the house to keep the water from ruining them, he said.

“We have the largest holding of music, photographs and personal belongings of Kid Ory,” he said. “We have boxes and boxes of archival material. It would have all been ruined if we would have left.”

He said they had to take care of one crisis after the next to make sure the artifacts weren’t damaged.

After the storm, a rainbow appeared Monday over the area.

After Ida passed, he was able to assess the damage throughout the property. The house had three windows blown out and one door knocked off its hinges. Outside the house on the rest of the property, debris and fallen trees — including four century-old magnolias — were strewn across the area. McCusker said they were lucky the wind wasn’t blowing a different direction or the magnolia trees would’ve crashed onto the house.

The storm destroyed the barn, which was bigger than the house, and the auxiliary shed, he said. And the tops of the trees were twisted around each other as though there had been some sort of tornadic activity, he said.

But the artifacts, and the museum’s two caretakers, were safe.

“It was ‘Night in the Museum,'” he said. “We had to stay to protect the collection all night!!”