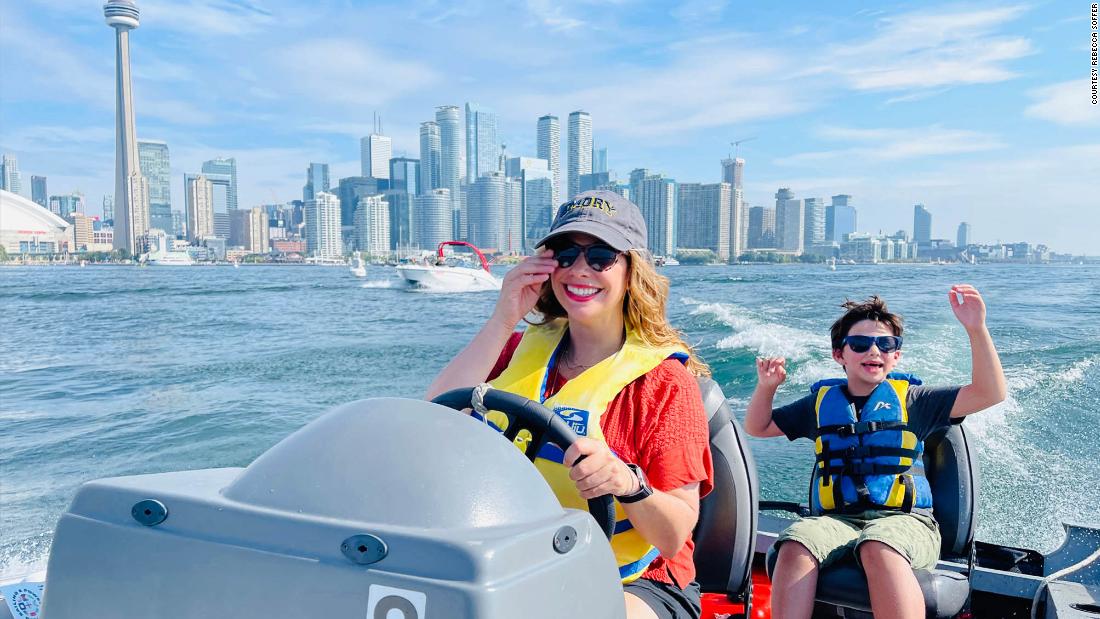 That was the first thing I said last month after reading that the Canadian government would open its border to nonessential travel for fully vaccinated US citizens and permanent residents on August 9, without requiring quarantine.

“That sounds complicated,” my husband replied. He had a point: We have unvaccinated 4- and 7-year-old sons and an 11-year-old labradoodle. But after 18 months of pandemic-juggling and bracing for another Covid-affected school year, I needed a break.

I wanted to look at something besides the locust tree outside my window in Great Barrington, Massachusetts. I wanted to be in another country. One we could drive to, since we decided to not fly with our kids while they’re unvaccinated. I wanted nice people and respect for Covid precautions. All those wants pointed to one destination: Canada.

So, we went for it. And after a whirlwind planning stage rife with confusion, I’m happy to report that part was notably more stressful than any part of the actual trip.

The guidelines seemed to keep shifting and we found contradictory information from various sources, even on reputable media and government sites.

What we learned: The Canadian government website says all travelers, upon arrival, must show a negative Covid-19 molecular test taken in the last 72 hours. And only unvaccinated kids 5-11 need to get retested (once upon arrival and another one on day eight, if the stay is that long), along with anyone else chosen at random.

Some friends in the know warned that a test taken even 72 hours and 10 minutes beforehand would be rejected, so we worked backwards from when we wanted to arrive in Canada and then aimed for several hours earlier in case of border delays.

Approaching the Canadian border at Buffalo.

Our local PCR testing site informed us that results could take 24-36 hours, so that part was a bit tricky to plan for. Ironically, we got them within an hour but needed additional help to get printable reports detailing that they were PCR tests. Antigen tests are not accepted.

It hurt our heads trying to figure out how to bring our dog along on a road trip during which we might be in between lodgings on hot August days — our two Canadian hotels had strict 3 p.m. check-in policies, no earlier — so poor Ziggy was left Stateside (if you do bring yours, bring a signed rabies certificate from your vet).

The next step was to enter our information on ArriveCAN, the official Canadian government app, within 72 hours before arrival. (The info can also be submitted via the government website and receipt printed off).

I’d read that ArriveCAN hadn’t been working well and wasn’t properly updated. But I found it to be easy and straightforward. Each traveler’s passport and vaccination card needs to be scanned into the app, along with an address of somewhere you’ll stay in case you need to quarantine in Canada. You’ll also need to know which border crossing you plan on traveling across, the date, and estimated time.

I wasn’t sure if I could change entry points later. So for two days, I obsessively refreshed the Canadian government’s land border wait time page, which is updated hourly and displays border crossings from East to West (make sure to also check them on the way back). The Rainbow Bridge in Niagara Falls seemed to have a longer wait in general (30 minutes or more during busy times), so I chose the Peace Bridge in Buffalo, where we’d be stopping overnight, and just hoped I’d chosen wisely.

The Saturday morning of our arrival we encountered a mere half-dozen cars at border control. My body finally started to relax as we inched toward the checkpoint flanked with large red maple leaves, while my husband gently begged me to not blast the Céline Dion I was firing up on Spotify.

We showed the agent our ArriveCAN digital receipts, passport and test results and in return received a PCR test box which I learned, to my surprise, I was expected to personally administer to my 7-year-old at a screening location in a nearby racetrack parking lot.

There was no wait at the site, which tests unvaccinated and randomly selected travelers, but the security guard told me that on the previous day — a Friday — there had been a big backup. I swabbed my son under the guidance of a friendly and patient staffer clad head-to-toe in PPE in the searing heat and was on my way. The results would arrive to me digitally on my newly created Switch Health account.

We drove straight to Niagara Falls, which was crowded but also felt immediately different from the United States.

Everyone is masked inside (and frequently outside), social distancing reminders and hand sanitizer stations are everywhere, and indoor locations have limited capacity. We rode the Ferris Wheel, which offers a glorious view of the falls, and noticed a staff member carefully sanitizing each car in between visitors. While in the long line to board our boat ride to the falls we felt a little squeezed but noticed a staff member reminding people to mask up.

The view of Niagara Falls from the 175-foot-tall SkyWheel on the Canadian side.

Next, we drove the 90 minutes to our hotel in Toronto, the Bisha, which wasn’t overcrowded when we were there midweek but according to the front desk had been at 80% occupancy the previous weekend. It’s rooftop pool scene was always lively against the open cityscape.
There was more than enough to keep us busy in the city, even with numerous restrictions and a historic heatwave. We meandered through the Toronto Islands on a rented boat. We took the Centre Island ferry for hours of fun on the Centreville rides (advance online tickets required due to limited capacity).

We wandered through the terrific outdoor Kensington Market. We drove to a mall to absorb some air conditioning and take advantage of beneficial exchange rates to do some shopping.

We took several street cars, nearly empty due to the August holiday period (all of which had seats blocked off for distancing), and booked advance timed tickets to see the CN Tower’s glorious 360-degree views.

Throughout it all, I felt comfortable, joyful and relaxed; feelings with which I became gratefully reacquainted after a very long time apart.

Watching the Blue Jays play the Tigers from the physically distanced section at the Rogers Center.

But the real highlight was sitting in the “physically distanced” section at the Rogers Center for the Tigers/Blue Jays game, where we cheered Miguel Cabrera’s historic 500th home run.

We’d been to Fenway Park in Boston in early July, before Delta took hold, and saw nobody masked anywhere in the stadium. Here, there was limited capacity, and omnipresent signs reminding us that masks were required for everyone, even when seated, unless while eating.

My favorite moment was when the woman who sold us lunch ran after me to offer extra salt and pepper for our fries. Ah, Canada.

Rebecca Soffer and her sons in Niagara Falls.

There are still some glitches in the international visitor system. I had a minor panic attack when, two days after my arrival, I received an email “Covid-19: Emergency Order to isolate” detailing how all travelers to Canada needed to quarantine for 14 days (I concluded this must have been a mistake, since it went against every other verbal and written instruction I’d received).

It was immediately followed by another email on follow-up testing, which took some careful reading to realize it was a reminder for anyone who had been selected at the border to do randomized testing and had not yet done so, and also for unvaccinated people who were staying in the country for eight days or longer.

Road trips with kids can be a slog during normal times. An international one in the throes of a relentless pandemic added a healthy dose of discomfort and uncertainty. And there were certainly places where physical distancing was more difficult despite all the signage, such as on the Niagara Falls boat ride or the Toronto Islands ferry.

But the benefit of showing more of the world to our children during a time when it has felt so constricted made the small amount of hassle involved worthwhile. A good reminder that fun adventures could be thrown together with little notice, a lot of uncertainty and a sense of humor.

On the morning of our departure, everyone wanted to stay in Canada just a bit longer. It felt calmer, organized, less divided over simple precautions and, yes, safer.

Alas, work and back-to-school preparations beckoned, and so we quickly and easily crossed the empty border at the Queenston-Lewiston Bridge (no Covid-related questions asked, and no paperwork required except for passports), and back into a land of fewer, if any, restrictions.

The night we got home, we decided to drive to Montreal in September. I’m counting the weeks already.

After a catastrophic break-up I travelled the world solo – here’s what I learnt
Antibiotics Use In Farm Animals Is Growing—Here’s Why It Could Pose A Danger To Humans
Valentine’s Day Gift Guide: The Best Italian Gifts For Pasta Lovers
Fungi-Powered Ingredients Startup Michroma Promising To Remove Petroleum From Food Colorings Raises $6.4 Million In Venture Funding
Boeing plans to add a new 737 Max production line to meet strong demand