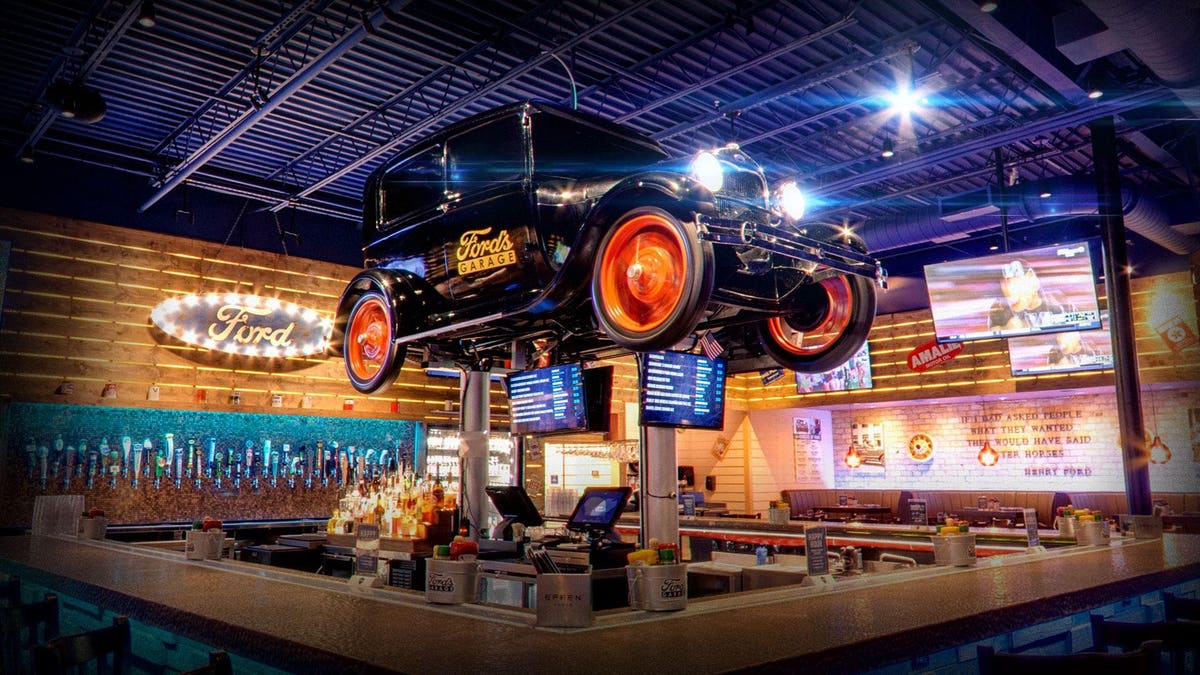 Ford’s Garage was launched in Fort Meyers, Florida as a classic beer and burger eatery in 2012. Its name derives from its proximity to Henry Ford’s winter home, the American industrialist who founded Ford Motor Company.

Since then the restaurant chain has expanded to 16 outposts, 14 of which are located in Florida with one each in Indiana and Michigan. All are franchised.

When Ford’s Garage first debuted, it had no association with Ford Motor Company, other than its name. But when the auto manufacturer learned of its existence, it embraced the idea of collaborating on a licensing agreement, providing the rights to present its model-T Fords, blue-oval logo and certain historical photos, and granting rights to sell a variety of Ford memorabilia including hats and t-shirts.

Moreover, Ford’s dealers have been granted an ability to buy into the franchises as local investors. So far dealers in St. Augustine, Daytona Beach and Orlando have become part-owners of Ford’s Garage.

Ford’s Garage, dedicated to comfort food, with a large selection of ales, is showing signs of franchising growth despite the steep competition.

“We customize our food. You can eliminate buns if you’d like,” Shlemon explains.

Its bar highlights 150 types of beer including 40 on draft, with an emphasis on local microbreweries, which vary from one location to another.  80% of its beer sales are for draft beer because most customers think it’s fresher and tastier, Shlemon says.

Most of its locations are large with 8,900 square feet, about 250 seats, supported by a staff of about 100 employees.

Asked what differentiates it from a bevy of burger and beer competitors like Applebee’s, TGI Friday’s and Houlihan’s, Shlemon, who is based in Tampa, Florida, says, “We serve angus burgers, all fresh ingredients, and we make everything in house from scratch.”

At $22 for its average check, it’s in the sweet spot of most of its clientele, which ranges from families to singles to grandparents.

Franchising includes a fee of $50,000, and the total cost runs from $1.4 million to $6.3 million. Its costs are higher than many other comparable franchises. Most have 7,500 square feet of conditioned space and 1,500 square feet of patio.

Shlemon attributes the higher fees to its eateries being “larger to build or retrofit. Add in the furniture, fixtures, equipment along with training make the investment $1.4 million to $4 million.”

In terms of return on investment, he says, “We look for a three-year cash on cash return.”

Expanding by franchising can be tricky because franchisees run the show. To maintain consistency, each franchisee must abide by certain protocols including only purchasing from company-approved vendors and suppliers.

Shlemon notes that its owner, the Icon Group, provides each franchisee a support team of 10 staffers that assist with real-estate, design, construction and purchasing.

One guest on Yelp praised the atmosphere at a Tampa location that was replete with “all the Ford memorabilia and gadgets” and liked her burger. The only thing she didn’t like was the car horn in the restaurant that kids were pressing on that made it too noisey for her.

Despite its reliance on franchising, Shlemon envisions that after they reach a certain point, they’ll likely open company-owned outlets and could buy back some of the franchisee’s locations.

Shlemon says the three keys to its future success are: 1) hiring quality people to run each restaurant; 2) selecting the right franchisees as partners; 3) maintaining its positive reputation that carries over to the new destinations.

World Famous Chefs Come To Telluride, Colorado For July 4th Culinary Celebration
The photographer documenting Australia’s abandoned places
Here’s The Latest Data On Climate And Food And It’s Not Good
Dufour 61: A Dynamic New Flagship Yacht
Lufthansa is bringing back the A380