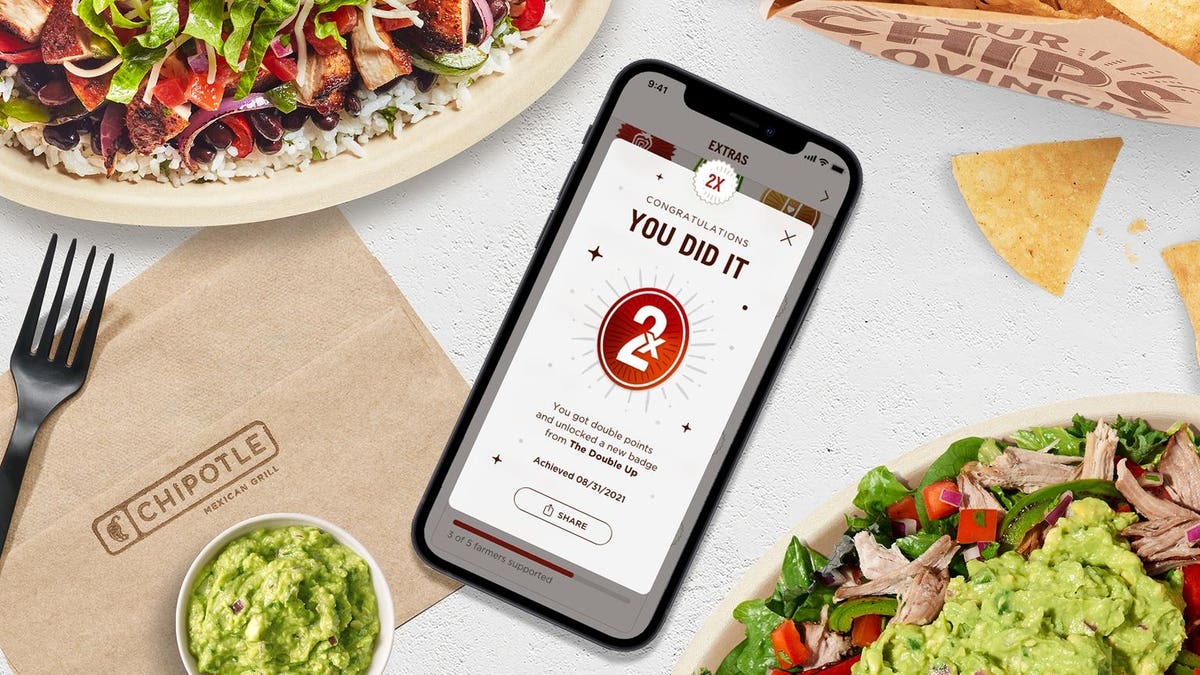 Chipotle has experienced wild success with its loyalty program throughout the pandemic. According to executives on the brand’s most recent earnings call in July, Chipotle Rewards has created deeper levels of engagement and has driven higher checks and frequency.

The program now includes nearly 24 million members, representing about 25% of the brand’s customers. Those members helped the brand generate a record year so far in digital sales, which surpassed the $2 billion mark as announced today.

Despite this milestone, the chain isn’t easing off the gas pedal. The company also announced a new feature for its loyalty program today, called “Extras,” which allows members to receive extra points and collect “achievement badges.” It builds on the chain’s recent announcement of its Rewards Exchange, which added a gamification element to the program and allows members to exchange points for more than 15 different rewards like food and merchandise.

“Offering new ways to engage with Chipotle is essential to the ongoing evolution of our digital business,” CMO Chris Brandt said in a press release. “The new Extras feature gamifies Chipotle Rewards through special challenges and allows Rewards members to celebrate their achievements with special badges.”

The company claims to be the first national restaurant brand to launch badges as part of its loyalty program. By gamifying its loyalty program, Chipotle is tapping a trend accelerated by the pandemic and will likely increase customer engagement in the process, as gamification has proven to do. There’s a reason the global gamification market is projected to grow at a compound annual growth rate of over 27% through 2025.

There’s also a reason Chipotle isn’t resting on its laurels here. Not only has its loyalty program proven to be an effective digital sales driver, but nearly the entire industry has caught on to the benefits of having such a program in place.

A recent report from Paytronix and PYMNTS finds that 47% of diners now use at least one loyalty program, for example, and the share of consumers using a restaurant loyalty program increased by 12% from January through April this year.

While other brands jump into the loyalty space, Chipotle’s Extras feature could provide a significant differentiator.

Perhaps a bigger headline from Chipotle, however, is its digital sales numbers and the pace at which they continue to grow despite the return of dine-in business. In Q2, reported in late July, digital sales made up just shy of 50% of total sales for the chain, or about $917 million.

Digital consumers tend to engage and spend more with the brand (at all brands, in fact) and, as such, Chipotle has been intentional about sustaining and growing those sales. It has launched digital-only products like its quesadilla, for example, and is accelerating its Chipotlane mobile-order-ahead real estate model. Consequently, the chain has experienced strong restaurant-level economics, pushing above $2.5 million average unit volumes. The chain is now aiming for $3 million AUVs and will continue to rely on its digital business and loyalty program to get there.

During that July Q2 call, CEO Brian Niccol said its loyalty program is a “key enabler” of its digital ecosystem.

“With this large base of consumers, Chipotle can distribute its own content, more and more effectively, and drive deeper levels of engagement within this community than ever before. We’re consistently able to generate more transactions from light, medium and high frequency users,” he said. “… We’re optimistic we can continue to build upon our success [and] we will continue to invest in the program to take it to the next level and have other enhancements to the program that are expected to be rolled out by year-end.”

Notably, about a year ago, Niccol said digital sales at the company could exceed $2.5 billion in 2021–a number that seemed ambitious at the time given that it would more than double 2019 digital sales numbers. At its current pace, however, and with four full months left in the year, that number now seems attainable.