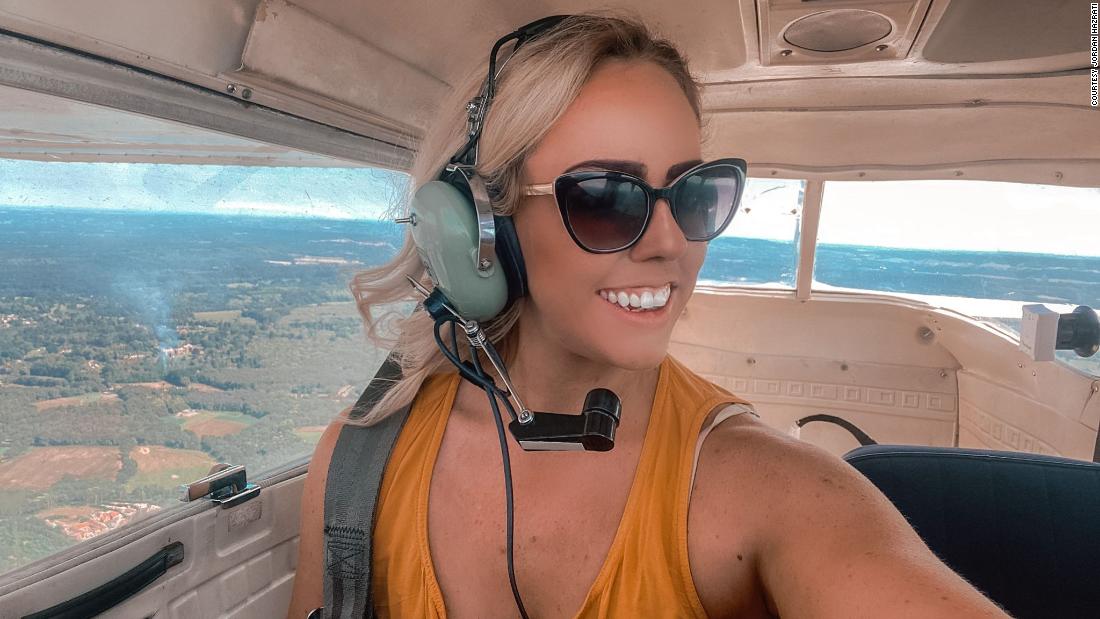 (CNN) — When Jordan Milano Hazrati was offered a job as a flight attendant with Virgin Atlantic, it was a dream come true.

“It was everything I’d ever wanted — I still can’t believe I did it,” she says. “I was sitting in the flight deck landing at Heathrow on my first flight, and I’ll never forget that view of the sunrise, and feeling so lucky I’d managed to do it. And the crew are the most amazing people — it really was the people who made the job.”

Hazrati, who’d previously been a flight attendant for Jet2 in her native Manchester, relocated to London’s Heathrow airport in February 2020 to take up her dream job.

But it wasn’t to be — eight months later, she became one of the many casualties of the crisis which has hit the aviation sector.

Many would have looked at an industry in crisis and walked away. But Hazrati has used the pandemic as a chance to make a play for the job she always really wanted, deep down: that of a pilot.

Runway to the skies

Hazrati can’t remember a single moment when she decided she wanted to fly. In fact, she started her career doing something totally different — she was a dancer, performing in musicals.

“There was so many points that I thought. ‘Something’s not quite right,’ and I was always attracted to aviation,” she says. “But I never wanted to admit it, for fear of the cost.” Learning to fly is notoriously expensive — and a “big obstacle,” she says, for those not coming from a wealthy background.

In 2017, two things happened: a change in her personal life meant she had a chance to take a leap career-wise, and her parents bought her a flying lesson for her birthday — “they knew how much I loved planes,” she says.

And that was it. “As we went down the runway and then took off, I was addicted. Ten seconds is all it took — the instructor said I was going to manage takeoff, I was terrified rolling down the runway, but did it, got airborne — and got addicted.

“We were looking down at where I went to university, at the M6 motorway which I used to drive every day. I thought, this is the perspective I need for the rest of my life.

She still couldn’t take the plunge, though. Learning to fly, she says, is a “lifelong commitment — it costs so much that you’ve always got to be sure that this is the right path.

“It probably wasn’t until I was pushed by the redundancy that I realized I was sure. It came to the point where I thought, not only do I want to do this, but this is the perfect time.”

So when the pandemic hit, while others were shoring up as many savings as they could, Hazrati did the opposite, deciding to pour all the money she had into her dream of becoming a pilot.

Hazrati has long dreamed of becoming a pilot.

It was cash she’d been saving for years for “something big — whether a deposit for a house or flight training, it really depended on how my career went,” she says.

“I could have paid off my student debt or got a house, but I have no regrets.”

She’s also been awarded a scholarship by The Air League, a UK aviation nonprofit, to help complete her PPL (private pilot license) training.

Since losing her job, Hazrati has worked a series of jobs to stay afloat throughout the pandemic: personal trainer, waitress, talking calls for the UK national vaccination line, and a Christmas elf.

She also volunteered at a vaccination clinic — and now, seven jobs later, is working as a human factors specialist at another airline.

But every week, she’s up in the air, working towards her ultimate goal. And even when she’s on the ground, she’s studying routes and learning theory — she reckons she puts in at least 15 hours preparation for her weekly flights. “I’m making the most of every single second,” she says.

Hazrati has sunk her life’s savings into pilot training.

So what does she get from from flying?

“The best feeling in the world,” she says. “It sets my soul on fire. Flying is the most incredible, unreal, unique feeling, and only a small proportion of people will ever get to feel it — I feel so grateful.”

Her joy is palpable, while talking and in the photos she posts on her Instagram.

Hazrati is now able to make solo flights, while hour-building, and admits there’s “vulnerability” up there on her own.

“But I love the routine and also the challenge — it uses all my brainpower and energy. And the work you do on the ground — all those maps and charts — pays off in the air,” she says.

“You think of what could happen if your airport was closed. You think of backups, look for fields. I love that challenge — it gives me my freedom and some perspective on life.”

Of course, not everyone would assume that a member of cabin crew would make the best pilot. Cabin crew are known for their gregarious personalities; pilots like to joke that they’re staid and serious — perfect for handling the plane calmly.

“That’s a stereotype, and it’s a little dated — a lot of the pilots I’ve flown with are the most incredible characters,” says Hazrati.

“They’re funny and interesting but they have the ability to flip to that focus when they need to. I would go in to offer them tea or coffee, and could have been in there chatting for a good hour.

“I’m really bubbly and will speak to everyone, but I also have that ability — I’m quite specific, mathematical and I love procedures. In [annual cabin crew] training, my favorite bits are always the safety procedures, so that’s a good fit for transferring.”

Of course, pilots are often viewed as superior to cabin crew, too.

“We see the value of each other, but in some areas of the industry there is that hierarchy — pilots are treated more professionally and cabin crew are seen as customer service,” she says.

“Some people would expect to see the pilots walking ahead, with the cabin crew behind — but that’s a legacy from the old days. We’re very much a team — not them in the flight deck and us outside.”

And she hopes that her past as cabin crew will stand her in good stead for future pilot jobs: “Hopefully an airline would say I can bridge the gap between flight deck and cabin crew — and that’s a barrier that needs to be brought down.

“We want more crew to say, ‘You know what, I really want to fly this thing.'”

Superwoman of the skies

Flying is “the best feeling in the world,” Hazrati says.

Hazrati’s last flight for Virgin Atlantic was a repatriation flight from New York to Heathrow in April 2020, helping passengers hurrying to see sick relatives, or getting home mid-lockdown.

“We knew we were on the brink of something changing, and a lot of us had an inkling it would be our last flight for a while, if not ever,” she says.

“I remember sitting in the flight deck for landing. The captain said, ‘I hope you all enjoyed that, it’ll be our last for a few months,’ and I cried. I couldn’t believe it was going to be taken away from me. But it was an absolute honor to be on that flight, doing what I love and helping people who needed it.”

Indefatigable in the face of the kicking aviation has had over the past 18 months, not only has Hazrati started training during the pandemic, but she’s also gone back to school — studying for a masters in human factors and aviation. “I needed to stay connected to the industry to ensure [that when it bounces back] I have something better to offer than when I left,” she says.

“I like learning, so a Masters was always on the cards, and human factors is what I’m interested in, but I wasn’t planning to do it this quickly. The pandemic just sped it all up again.”

In fact, she tips “human factors” — the ways in which people interact with aviation, covering everything from ergonomics to decision making and occupational psychology — as a major sector to emerge post-pandemic, as “there’ll be an emphasis on making sure people are OK.”

Ultimately, though, that pilot goal is still there — even though the industry is in the worst shape it’s ever been. She knows, she says, that it takes years to build up to flying for a legacy airline — and even longer to fly long haul.

But she’d be happy to swap those glamorous cabin crew trips to Johannesburg, Hong Kong and LA for short domestic hops — as long as she gets to sit in the flight deck.