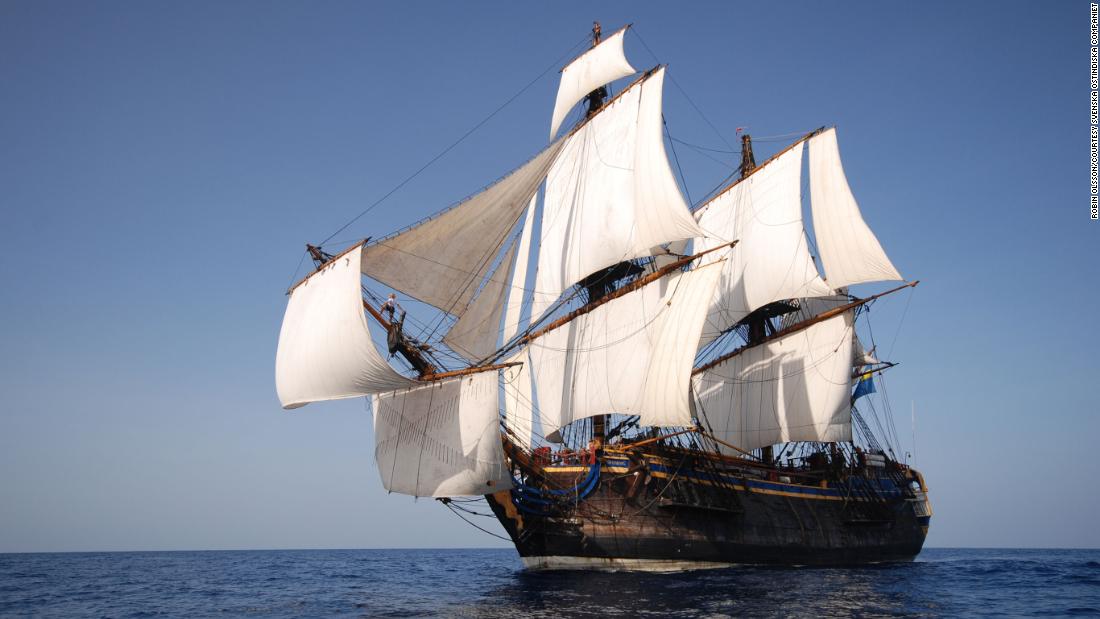 (CNN) — Nearly 200 years after it sank into the sea, the galleon Götheborg is retracing its path around the world.

The original Götheborg, a trading vessel that belonged to the Swedish East India Company, sank in 1745.

Despite going down in the Göta älv river near Gothenburg harbor, divers were first able to explore its wreck in the 1980s.

A full-scale replica, dubbed Götheborg II, now stands proudly in Stockholm’s waters. In April 2022, it will set sail from Sweden and begin to retrace the journey of its namesake.

The Götheborg II towers over other boats in harbor.

That route requires passing through the Suez Canal, which was the site of a global soap opera earlier this year when a container ship called the Ever Given got stuck there for more than a week, blocking other ship traffic and disrupting global supply chains.

If all goes according to plan, Götheborg II will arrive in Shanghai sometime in October 2022.

Docked in Sweden, the ship currently has 80 crew members. At each stop, new deck hands will come on and the member of crew members will grow by about 50, meaning that there should be about 600 people on board to help see the Goteborg II safely to Asia.

“The mission for the journey is to strengthen Swedish-Asian trade relations, and promote the need for innovative solutions for a more sustainable world,” a rep for the Götheborg II tells CNN.

“The expedition’s aim is to bring forward Swedish innovations and businesses as an important and necessary part of the solution towards our vision of creating a sustainable future.”

Joining the past and the present

One of the challenges of re-creating the ship was finding the same kinds of wood and tools used in the 18th century.

During its lifetime, Götheborg was the world’s largest wooden seafaring ship. The team building Götheborg II didn’t want their ship to be a modern interpretation — rather, they spent time finding the correct materials and tools to build a ship the exact same way they would have two centuries earlier.

Altogether, it took more than a decade to complete.

The original vessel was owned by the Swedish East India Company, which was set up to establish trade between Sweden and Asian countries, primarily China. The company was in business from 1731 until 1813 and is responsible for bringing many Chinese products, like tea and rice, to Sweden for the first time.

And the ship’s name, Götheborg, was particularly fitting. Gothenburg (as it’s spelled in English) is situated on Sweden’s west coast, making it a perfect entry and exit point for these ships. In the 18th century, Gothenburg thrived as a center of commerce and grew to become Sweden’s second-biggest city, which it remains now.

Even today, more than 200 years later, there are still glimmers of that era in the modern, busy city. For example, the onetime office of the Swedish East India Company is now home to the Gothenburg City Museum.

The Swedish East India Company was re-established in 1993, although with a considerably different mission. Instead of focusing on trade, the company now works to support Sweden’s shipbuilding industry.

The couple who met at Disneyland
Colorado’s Wine Industry Is Bringing Economic Growth To A State Known For Fun
Could your flight be cancelled? Check the dates of summer strikes and disruption
Tourists are back in Iceland. But so is whale hunting
How two women with the exact same name became best friends