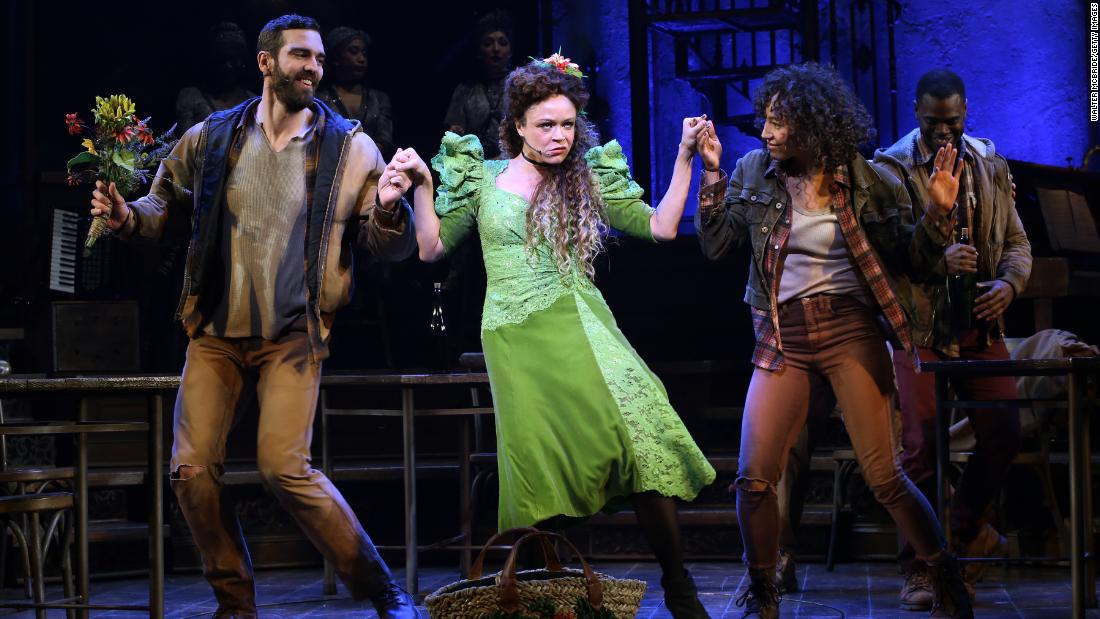 Travel
Share on Facebook
Share on Twitter
Share on Pinterest
Share on LinkedIn
Bonnie Comley, a three-time Tony award-winning producer and President of the Board of The Drama League, spoke to CNN about new Covid safety protocols being implemented by Broadway theaters and productions as shows resume.
“It’s really exciting to get back into the theater. The producers and the theater owners have made the commitment to open it this time and the shows are going on,” Comley said.
That commitment means audience members will need to show proof of vaccination and will be required to wear masks. There will no longer be intermissions or autograph opportunities at stage doors. Many show times are being condensed to run about 90 minutes.
Comley said show directors are working in tandem with theater owners in support of the changes.
“The perfect example of that is with ‘Harry Potter and the Cursed Child.’ That was a two part show, five hours worth of theater. That was a magnificent piece of theater, but like a bunch of pieces of theater they’ve actually condensed it.”
When it returns on Nov. 16, “Potter” will be combined into a single, shorter show.
“It’s going to be all in one seating,” Comley said. “So, it’s really like seeing a new show again.”
Producers are not only reworking the length of what you’ll see on stage but also changing choreography backstage.
“The people that change other people, all that stuff that you don’t see is also being restaged and there will be safety deputies that are going to be assigned backstage to watch all of that,” she explained.
“Things are changing, and it’s not necessarily going to be what it was when we left it back in March of 2020, but there is still going to be great theater,” Comley said.
“Springsteen” reopened in June at the St. James Theater. Sara Bareilles will return to star in the lead role of Jenna Hunterson in “Waitress” on Thursday. “Hadestown,” the last show to win a Tony Award for best musical before the coronavirus pandemic, also returns Thursday. Other major productions, including “The Lion King” and “Hamilton,” will reopen in two weeks.

Broadway is big business for the economy of New York and an estimated 97,000 people are employed by shows. The Broadway League launched a campaign this week narrated by Oprah Winfrey to welcome theater lovers back.
Broadway actor Timothy Hughes was performing eight shows a week in “Hadestown” at the Walter Kerr Theatre before the pandemic. He takes the stage again for the reopening this week, along with the rest of the cast and crew who are being regularly tested for Covid.
“I don’t think that I really admitted to myself how much I missed the experience of live theater,” Hughes told CNN. “As an actor, as part of this cast, as an audience member, the visceral response of a live show is something that is so much a part of who I am and what I do and I can’t wait to share that experience again with audiences.”
Hughes said he feels as safe as he can going into opening night and that he is part of a fully-vaccinated company.
“We are still wearing masks for a lot of rehearsal processes and being tested.”
When he returned for rehearsals this summer, Hughes said he was overwhelmed with emotion over not being inside a theater for 15 months.
“This theater has become like a second home for all of us who have been a part of the show from the beginning,” he said, adding, “It’s a whirlwind of emotion really. It was like just seeing it in a whole new context. There was like a new sense of fear and anxiety about returning to this space, like any kind of enclosed space now feels different.”
He expects the first show to be an emotional experience for everyone involved. “Overwhelming for us as a company, overwhelming for that first audience,” he said.
“There was nothing that compares for me to the visceral response to that exchange of energy between performers and an audience that’s happening live,” Hughes said. “I am also super grateful that I’m returning with this show. The messages of ‘Hadestown’ are going to resonate more on a deeper level than they did before.”
Longtime “Moulin Rouge” company member Paloma Garcia-Lee, who will also star in Stephen Spielberg’s movie adaptation of “West Side Story,” told CNN that she expects the Broadway reopening to feel like an “intense exhale” for every artist involved in the theater.
“Every step of Broadway coming back right now is historic,” Garcia-Lee said. “Broadway has never in its history stopped for that long.”
A historic reopening for performers, for audiences, perhaps, a reminder of the magic that can be found in shared experiences.
“To sit in a Broadway theater and the lights start to dim, it’s not like the TV show you’ve been watching,” Garcia-Lee said. “Broadway happens on one place on Earth in New York City in those select theaters. It’s magic.”
This article was originally published by Cnn.com. Read the original article here.
Share on Facebook
Share on Twitter
Share on Pinterest
Share on LinkedIn