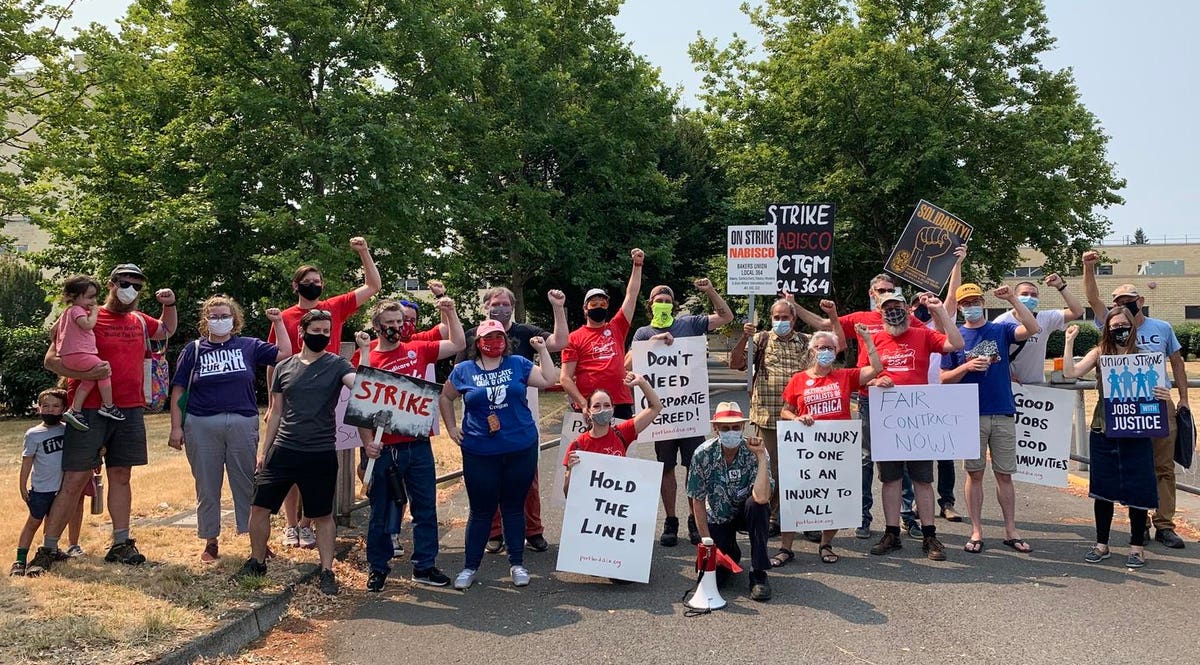 Since August 10th, unionized bakery plant workers in five states who make Oreos, Ritz and Chips Ahoy, have been on strike. Here is what two striking bakery workers have to say.

Carl Miller has worked for Nabisco for 34 years and is a member of BCTGM (Bakery, Confectionary, Tobacco, Grain Millers) Local 358 in Richmond, Virginia.

Mike Burlingham has worked for Nabisco for 14 years and is BCTGM Local 364 Vice President in Portland, Oregon

Note: This interview has been edited for length and clarity.

Errol Schweizer: Tell us a bit about your job.

Mike Burlingham: I have been a worker at the Portland biscuit factory for 14 years now. And I’ve done a variety of roles. I think when people hear the word baker, you’re picturing the white coats and the tall hat, and they’re rolling out dough. And for a lot of the smaller bakeries, that’s exactly what it is. But we do things on a very large scale. It is a large bakery that takes up several city blocks. The process starts with giant silos, filled with our raw ingredients and tanks with oil, and goes through the process with automation. So we have our mixing department, which trickles down into a big shop where things go through very large ovens on a very large conveyor, which then heads down into our packing department where everything is mostly done by machines operated by us. And then it’s sent out to our warehousing and distribution centers.

Carl Miller: When we were first mandated to be open for production, we weren’t sure of COVID. We didn’t know where it came from. We didn’t know how it was transmitted. But then as time progressed, a few individuals in the bakery had tested positive. Now, we wouldn’t get this information until one or two days later, and then find out where this particular individual actually worked. You begin to backtrack in your mind as to where was that? What was I doing? And have I been around them, they’ve been around me? As far as working in a bakery, it is very unrealistic to work in a six foot separate capacity, a lot of jobs are overlapping, you have to give directions, you have to talk, you have to share, you have to assist. It left stress levels to be rather high. And volume was just incredible. Because we make all the products that people eat for comfort, you know, everybody was sitting on their couches during the pandemic eating Oreos, Chips Ahoy, Ritz crackers, you know? And the expectation was to be here. My wife herself contracted COVID-19. And that, for me was very stressful, very scary. And to still have the pressure to come to work.

Errol: What inspired the strike?

Carl: The backstory is that Mondelez acquired us in a split with Kraft Foods
back in 2012. So earlier in 2012, we had just re-negotiated a new contract with Kraft Foods at that time. When Mondelez acquired us in 2012 we could almost feel the atmosphere change right away, you could tell that the this was a whole different animal that we were going to be working with. Mondelez is a global company. So, we’re no longer competing with markets in North America, we’re now competing against Europe and China. And so when it came time for renegotiation in 2016, they put out a letter to us, and that basically summarized that was it going to be our way or the highway, these are the concessions we want you to take. And it was written in a way as if they were trying to tell us that us making less money and paying more out of pocket for our benefits is good for us. Basically, what that means is, you can either take these, or we can take our business elsewhere. They have two very large factories down in Mexico. And 2016 was also the same year that they told Chicago to accept concessions. And Chicago didn’t agree to their terms. And so true to their word, Mondelez closed half of Chicago. So the 1200 person workforce went down to 600, just like that. And they invested that down in Mexico, which we have to believe was their intent all along. Just in those last seven years, we’ve seen over 2000 people now out of work, because they have shut the bakeries down.

Mike: So in 2016 was our first time meeting at the table with Mondelez. And it was very clear they had certain things in mind, and they were unwilling to budge from those. One of those things at the time was to back out of our pension plan. That’s a big reason why people have come to work at these Nabisco bakeries, is that we had a pension plan and between the money you can make with the benefits along with the pension, it’s a good job. It was a place that you can plan to work for a long time. And retire from. And that’s exactly what people do. There’s folks who put my 14 years to shame, they’ve been there for 40-50 years. So it’s incredible. It is. It really is. We have one lady in our bakery here, she’s been there for 55 years. And she’s still going.

Errol: What is at stake ?

Mike: We’re not coming into these negotiations with a bunch of wants. We’re coming in saying, we’ve already fought for what we have today. We’ve already given up things in the past. We are asking to maintain those benefits and Mondelez, their stance on it is, “Well, we weren’t there for that, we know nothing about it, this is what we want.” So things went stagnant. In spring 2018, without negotiation, the company sent out a statement that they were withdrawing from our pension.

We’ve paid for those long before my time there, the people before me, who fought to have that benefit. They already gave things up. And you know, it’s unfortunate to see something like that happen, especially because this is manufacturing. And as automated as some things are, it’s still a labor intensive job, you are putting in a lot of hours, you have mental and physical fatigue, and you put your body at risk. And I can speak personally, that I’ve been injured on the job. So, that’s the trade off, you’re putting your body at risk when you go there. And, you know, the payoff is at the end, do you have something that you can retire with? And now that’s gone? That’s horrible.

Mondelez in particular, had a very profitable year. In 2020, Mondelez, netted $26 billion in revenue. Their net income for the quarter ending June 30 of this year was $1.08 billion. That’s a 98% increase, or double the second quarter earnings from 2020. Mondelez net income for the 12 months ending June 30, was $4.3 billion. And that’s a mere 24% increase. So they’re doing very well this year, going into these negotiations.

This isn’t a company that’s hurting. We’re not coming into these negotiations with a bunch of wants, just keep what we have.

Errol: How can the public support your efforts?

Mike: This is a nationwide strike with Nabisco. If you’re near any one of the locations, showing up and getting the word out. If you’re nowhere near these areas, while we’re out on strike, avoid buying Nabisco products.

I just read a quote from the striking coal miners in Alabama, that this this isn’t just about us, that this is a fight for America’s working class. So keep yourself educated and fight for what you know your worth.

Carl: It’s just my opinion that the unions across the country, I think we’re all inspired by each other right now. Because everybody’s having the same experience. We all worked harder than we ever did during the pandemic. We were exposed. We were put in harm’s way. And we worked. We showed up. We made them all that money. And then they come to the table and they ask for everything.

This is our line in the sand. We’re standing up for ourselves finally. Everybody stand up together standing with their humanity. We are united.

Everyone should really pay attention to what this means, it’s the middle class fighting to stay alive. And we’re all banded together right now. The union movement is strong. If you’re not union, you should join one.

Visiting a National Park This Year? Here are the Best Places to Stay
FAA says contractor unintentionally deleted files before outage disrupted thousands of flights
The best spa hotels in Scotland for 2023
Fresh Take: What 2023 Has In Store For The Food Industry
What’s Next For The No-Alcohol Market?