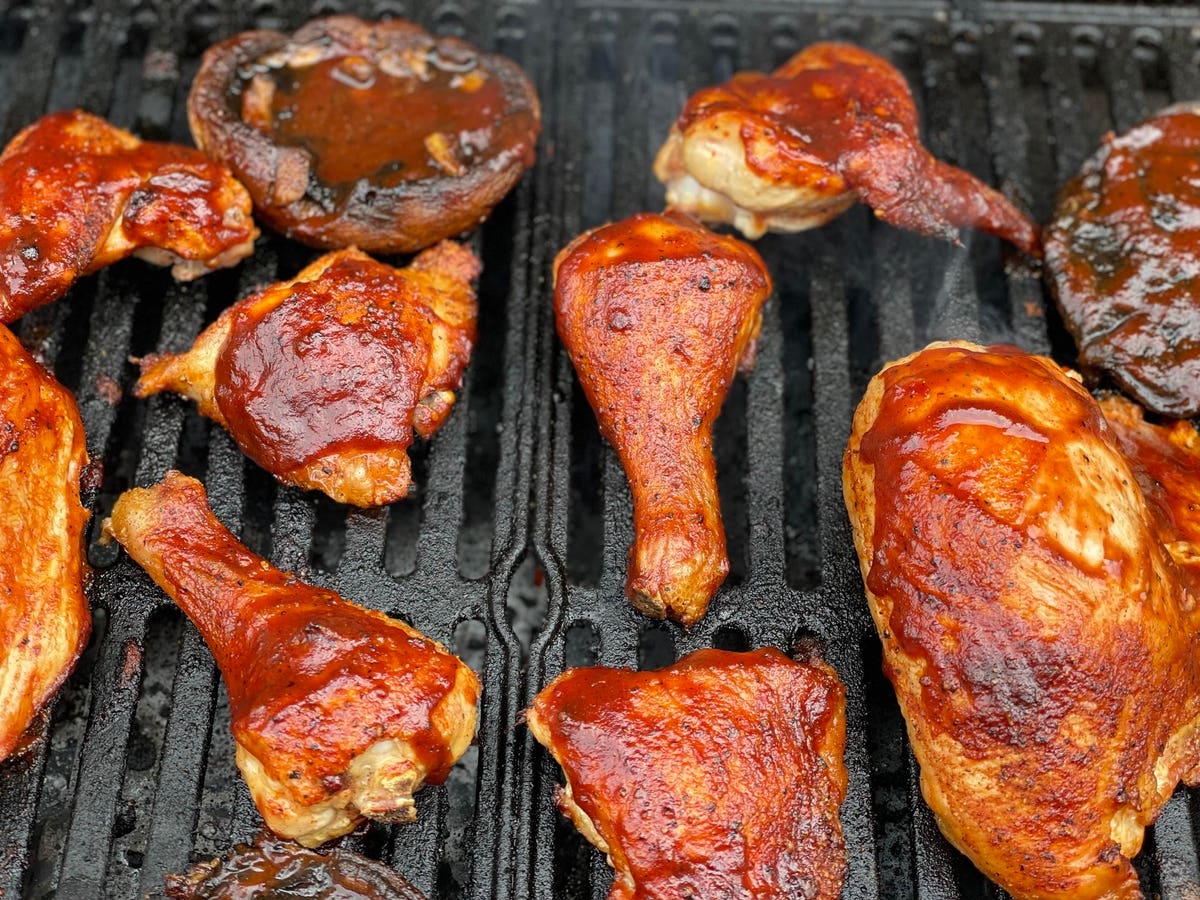 Barbecue chicken is universally loved and also not considered “serious BBQ” by grilling and barbecue aficionados. I think that is because the barbecue part has more to do with a sweet red [bottled] sauce than real barbecue.

The barbecue chicken that most of us grew up on was made by slathering chicken pieces with that thick sugary sauce generally scented with liquid smoke and purchased at the grocery store. Often times, this barbecue chicken was made in a 9 x 13 glass casserole pan. The entire bottle of sauce was poured on the raw chicken and it was often baked in the oven. It wasn’t bad and made the house smell good with the vinegary scent of cooking BBQ sauce but it’s not really “barbecue chicken.”

It’s no wonder that the most common grilling mistake is to cook chicken over direct heat and start the chicken slathered in sweet barbecue sauce. This results in chicken that is burned on the outside and raw on the inside.

Anyone who grills a lot knows that bone-in chicken pieces need to be cooked by the indirect method and that you only put a sweet barbecue sauce—that has a propensity to burn—on during the final 10 minutes of the cooking time.

This decision instantly created layers of flavor—one from the rub and one from the cooked-on sauce at the end.  This is a common technique for making ribs and other barbecued meats, but since most people use a bottled sauce for chicken, it is not as common.

I grilled the chicken pieces for about 20 minutes and then added Portobello mushroom caps to the cooking grate that were also seasoned with the barbecue rub. These were “barbecue” for my vegetarian friends, but if you love mushrooms, you should make them as a side to the chicken because they are as good as the chicken!

The Spark grill employs a heat spreader that deflects the direct heat which means that it is designed to cook using indirect heat. This design feature makes it very easy to cook chicken pieces the right way as there is no need to configure the burners or charcoal to create indirect heat.

After about 35 minutes, I could see that the rub was creating a really beautiful crisp crust on the top of the chicken pieces before I even sauced them. At this point, it was about seven minutes before the chicken was done and I liberally sauced the chicken pieces with my homemade Sweet and Sassy Bourbon BBQ Sauce. I closed the lid of the grill and let the barbecue sauce set and glaze the chicken as it finished cooking.

When I took the chicken off the grill to let it rest, I could immediately tell that the skin was crisper and had more texture than when I make barbecue chicken with salt and pepper and then slather it with sauce. But taking a bite of it was when I was really convinced that layering the flavors and the textures is how to make next level barbecue chicken.

This sauce (and the companion Sweet and Sassy Spice Rub) makes next level barbecued chicken. It is also great on ribs, pork and hearty fish like salmon and catfish as well as Portobello mushrooms, charred onions and slabs of grilled potatoes! Make barbecued Portobello mushrooms at the same time as the chicken for the veggie lovers in your life.

In a large saucepan on the stove, add tomatoes, sugar, molasses, Bourbon, ketchup, chili sauce, vinegars, and Worcestershire sauce, stirring after each additional ingredient to combine. Add the Classic Spice Rub and simmer until flavors have blended and sauce has thickened somewhat, about 30 minutes.

Let the sauce cool for about 10 minutes or until it is warm but no longer “boiling” hot. Puree using an immersion or traditional blender. Taste and adjust seasoning with salt, about 1/2 teaspoon, and freshly ground pepper. Remember, the meat will have plenty of spice rub on them, so don’t over-season the sauce.

Add the cocoa powder and mix well to combine. Let sit 5 minutes and stir again to make sure cocoa powder is well distributed. Let cool and pour into a clean glass jar for storing. The sauce can be made in advance and kept for 2 weeks in the refrigerator.

Extra rub can be stored in an airtight container for up to six months.

Why Your Next City Break Should Be Toronto, Canada
The best hotels for woodland walks in Britain this winter
The best restaurants in Vail
“A Stroke Of Serendipity” – A Technology Developed For The Bioethanol Industry Has Economic And Environmental Benefits For Beef And Dairy Production
Budget-friendly Gift Ideas for Any Traveler