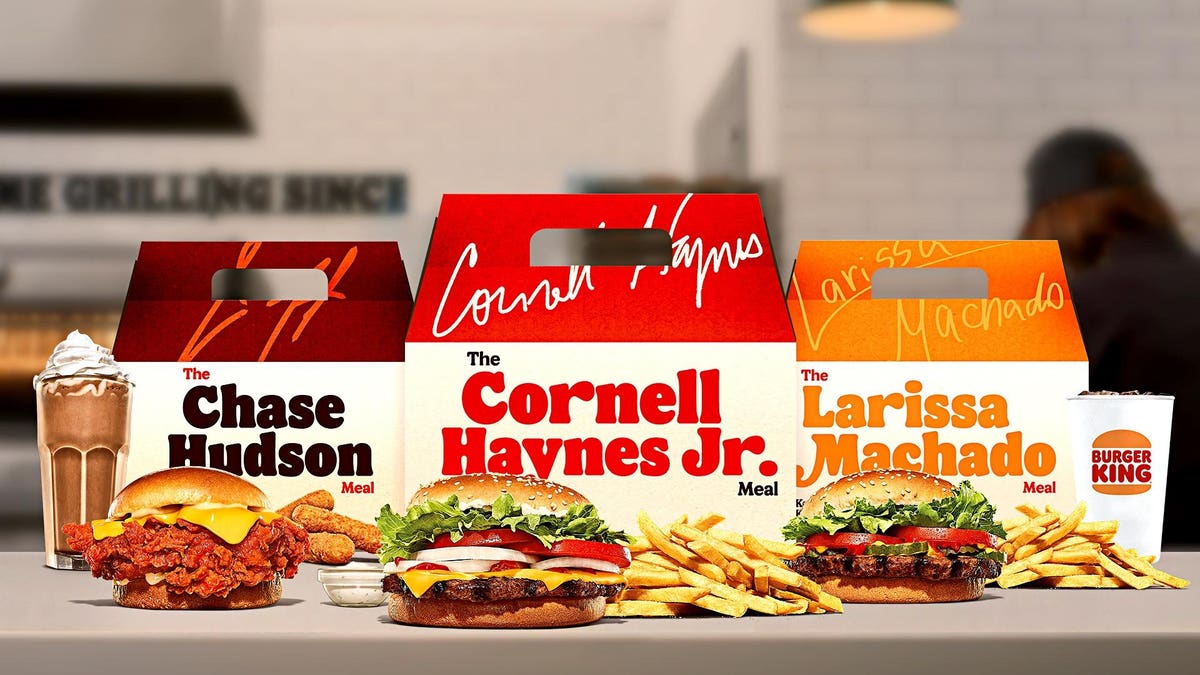 They say imitation is the sincerest form of flattery and so like many of its competitors, Burger King has recruited a few celebrities to try and sell its products.

Nelly, Lil Huddy and Anitta have signed on for the chain’s new Keep It Real meals, promoting its move to ban 120 artificial ingredients as part of a broader commitment to “deliver real food.” Among those ingredients are artificial colors, flavors and preservatives from artificial sources.

The marketing hook here is that the meals will feature the celebrities’ real names to coincide with the brand’s “real ingredients” journey. The meals include:

The Keep It Real meals are available starting Sept. 12 for a special price of $6 for the chain’s Royal Perks members. With this promotion, Burger King hopes to drive more customers into its loyalty program–launched nationwide just a week ago. Loyalty programs have become table stakes in the restaurant space, as they attract an increasingly digital consumer set looking for exclusive and personalized offers, and those consumers tend to spend more.

Celebrity meals have also seemed to become quite critical. Such meals have provided a material sales lift for McDonald’s
, for example; Bank of America
raised its estimates for McDonald’s following the wild success of its Travis Scott promotion, and restaurant visits were up 12% after launching its BTS promotion. Dunkin’ got a sales boost from TikTok star Charli D’Amelio’s signature drink, and Jack in the Box
jumped into the virtual restaurant space with the help of singer/songwriter Jason Derulo, while Wendy’s
hired popular Twitch streamers to promote a recent delivery-only campaign.

The brand has pulled all the stops to avoid any further sliding–unveiling a new “restaurant of tomorrow” design, jumping into the intensifying loyalty space, throwing its crown in the chicken sandwich ring with a differentiated (hand-breaded) product and rolling out its first rebrand in more than 20 years.

It also piggybacks off the chain’s announcement one year ago that its signature Whopper was officially free of colors, flavors and preservatives from artificial sources. That announcement was supported by a bold ad featuring a moldy Whopper, which certainly got people talking.

By leveraging celebrities, Burger King could get more people talking–at the very least fans of those three celebrities. It also shows the brand is very clearly taking a page from its competitors’ playbook. And why wouldn’t it? Those competitors have had tremendous success with their respective celebrity campaigns.

The difference here is Burger King is cleverly focusing on their real identities to shift the focus back to that “real ingredients” journey. Therein lies an important differentiator for the brand. The Keep It Real Meals aren’t about the celebrities at all, but about ingredient lists consumers increasingly pay attention to.

“We know our guests’ expectations are changing, and they want to make choices they can feel good about,” CMO Ellie Doty said in a press release. “By banning these 120 ingredients from our food, we’re offering guests an easy choice–delicious food made with quality ingredients. We’re confident that our ongoing commitment to real food will not only provide guests with the food they’re looking for, but also set a standard for the industry overall.”