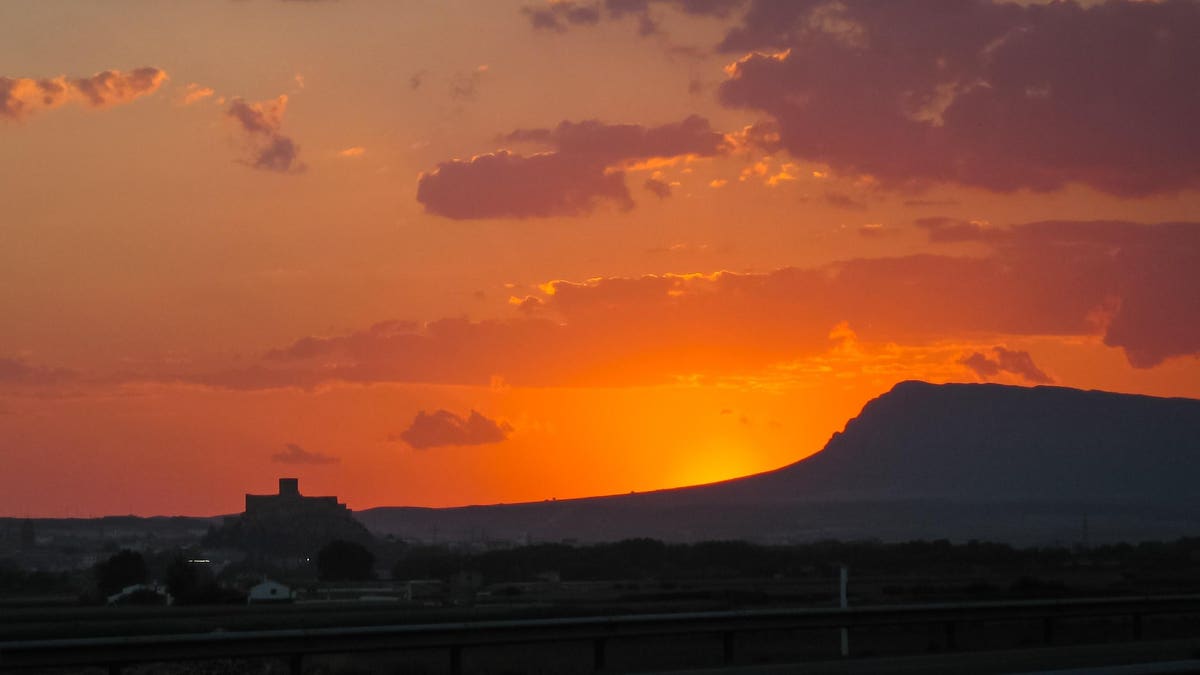 A secret garden of vineyards sit at 2,300 feet and beyond in elevation within a tiny wine region called Almansa in Spain, surrounded by limestone mountains called El Mugrón that protect the old, dry-farmed bush vines that are ungrafted as it is a place that is quite isolated from anything from the outside world. Ungrafted vines are always a remarkable sight in Europe considering that European vineyards were almost wiped out completely by an American pest called phylloxera, hence why many European grape vines are grafted onto American rootstocks to combat it. Almansa soils are mainly made up of limestone and they are poor in nutrients and the combination of having such a soil with an arid, cooler climate makes it difficult to grow anything besides cereals, olive and almond trees and vineyards that produce low yields.

It is a town that, many times, gets passed up as one drives from Valencia on the central eastern coast to the city of Madrid without the person knowing that in their rearview mirror is a special designated wine region that specializes in such unique dominant red grape varieties such as Garnacha Tintorera (known as Alicante Bouschet in France) and Monastrell (known as Mourvèdre in France). But if European wine history has taught the wine world anything it is that many wine regions were never fully discovered because there wasn’t a strong enough transportation infrastructure to assist them with getting their wines to markets in major cities and the wine regions that became popular early on were able to construct vital infrastructures to vital markets.

It is amazing that these old bush vine vineyards were able to survive in a tiny delimited wine region in Spain that had no fast track to fame, especially considering that the European Union was paying vineyard owners to pull up their vines as there was a European wine surplus – combined with these low yielding vines make it difficult to make a living when they are tragically being blended away into bulk wine; even the Spanish Civil War, from the mid to late 1930s, played a part as many of the wine producers from the small town of Almansa either died in the war or were part of the hundreds of thousands of people who just went missing during and after that time. Yet one family was able to continue on and kept these old bush vines alive: Bodegas Piqueras.

Luis Piqueras started making ‘jug wine’ for his neighbors in 1915 and he was one of the few locals that had the great fortune of coming into a significant amount of money in the late 1920s and hence he was able to buy a large plot of land where he would build a modern winery over time. Luis’s son-in-law Mario Bonete went on to study winemaking and today, Mario’s son, Luis’s grandson, Juan Pablo Bonete Piqueras runs the winery with his brother continuing to strive to showcase these vineyards so they will survive for generations to come. As Juan Pablo (known as JP1) was standing in his tasting room surrounded by black and white photos of his grandfather and father, he stated that his father, Mario, established the Almansa DO in the 1960s to make sure it was recognized as a quality winegrowing area. “In fact my father was the president of the DO for more than 18 years and I was also the president of the DO for eight years,” Juan Pablo said with pride as it is very much a family mission to keep the Almansa wine region alive with his brother, nephews and soon to be his son joining the fight. And considering there are only 12 wineries that are a part of the DO and 750 grape growers with Piqueras producing over 80% of the wines from the Almansa DO, if Piqueras decided to close shop it would have a massive negative effect on the region.

The winemaker of Bodegas Piqueras, Juan P. Cantos, affectionately called JP2, is another one who has joined the fight after spending many years learning from other wineries around Spain, as well as a harvest to refine his white winemaking skills in New Zealand, and he even won a competition to become a winemaking student at the legendary Spanish winery Vega Sicilia. Interestingly enough he was born in Almansa but his winemaking dreams took him to other places until four years ago when he decided to come back home mainly due to family and friends but he discovered in the process of coming back that there was a wealth of old bush Monastrell and Garnacha Tintorera vines.

Juan Cantos is very well aware that the red variety Monastrell is not only better known coming from the Southern Rhône (Mourvèdre) but also from other areas of Spain such as Jumilla and Yecla – the latter being a wine region he has already previously worked in, and that Garnacha Tintorera a.k.a. Alicante Bouschet is a rare red variety from Southern France with red flesh as well as dark skins yet has recently made a strong name for itself in Southern Portugal, its often proclaimed adopted home. But Juan Cantos makes a case for those who love these grapes, and those who are curious about them, that the Almansa wine region is a place that shouldn’t be missed but getting that message out is difficult because their budget as a wine region is severely limited due to only having a handful of wine producers in the region.

Wealth of Old Vines in a Modest Wine Region

Bodegas Piqueras makes a few different lines of wine and the ‘Castillo de Almansa’ is the most widely distributed; one can find them in the U.S. from $12-$15 and although they are their middle tier wines, they still contain 45 to 65 year old dry-farmed Monastrell and Garnacha Tintorera with the ‘Selección’ containing Monastrell, Garnacha Tintorera and Tempranillo from 65 to 90 year old dry-farmed, ungrafted bush vines. Then their premium line of wines go by Piqueras such as their ‘Piqueras VS’ that contains 50% Monastrell and 50% Garnacha Tintorera from dry-farmed, ungrafted bush vines that are over a century old, and the VS is such a beloved wine that it is the only one that Juan Cantos and Juan Pablo Bonete Piqueras sign. Juan Cantos has been working on a couple of fun projects such as the ‘Piqueras Wild Fermented Verdejo’ white wine and the newly released ‘Los Losares’ which are two different single varietal wines from a single vineyard that is 3,000 feet in elevation containing a stony soil with vines that are over 80 years old; there are two bottlings, only 6,000 bottles made of each, one is from the old dry-farmed, ungrafted bush vines of Monastrell and the other with Garnacha Tintorera.

It is still a struggle to get the word out about these special vines that are off the beaten path, tucked away in this limestone mountainous area of Almansa but at least there is a producer such as Bodegas Piqueras who has been able to guarantee a paycheck for these farmers year in and year out for over a century; if it wasn’t for Piqueras, potentially all of these old, ungrafted vines and a way of life that involves traditional vineyard farming techniques would be lost as other places around the world are certainly much more famous and can command higher prices, unlike the unknown Almansa. And to think, it all came down to one day, the day that the founder Luis Piqueras bought a lottery ticket for eight pesetas and he ended up winning the equivalent of $50,000. That not only changed everything for the home winemaker to invest in building a professional winery but it changed the courses of actions that could have taken place for the entire winemaking area as the farming families would have to grub up these precious vines just so they could put food on the table. And it is only fitting that a woman who runs their administration office in logistics is the granddaughter of the man who sold Luis that ticket. A moment in time that altered the future lives of so many yet this community is still hoping to get to the next level… where the globe recognizes the value they bring to the wine world.