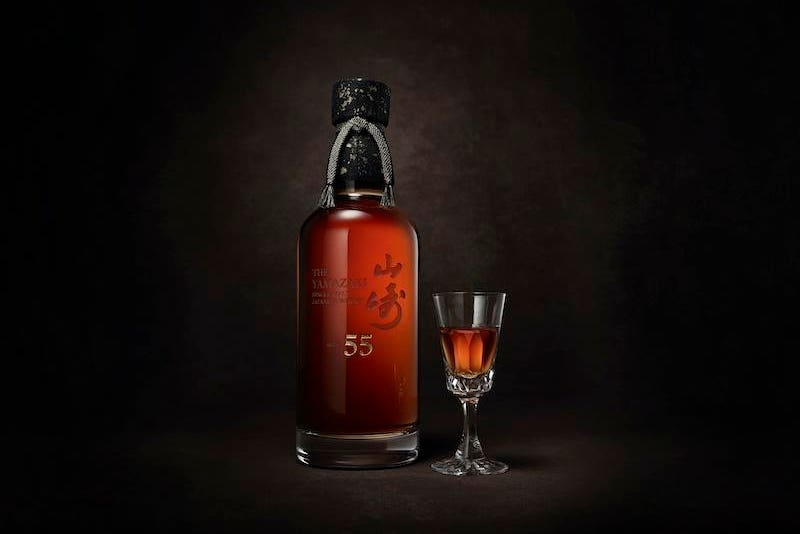 Last year, in the early months of 2020, right before the coronavirus pandemic hit New York City with everything it’s got, Beam Suntory announced that it was going to release a phenomenal expression in the middle of the year: A Yamazaki 55 at 46% ABV, which is the oldest Japanese whisky to ever hit the market. Unfortunately, that “advance reveal” was only intended for residents of Japan, and only 100 bottles were produced, complete with engraved calligraphy making use of sandblasting techniques, featuring genuine gold dust, and real lacquer—all of which were available only by way of lottery for the nifty sum of $27,000 (or three million yen). That initial rollout ensured that true Yamazaki enthusiasts from Japan had a fighting chance to get their hands on the precious liquid created in their Motherland. The distillery even stated that each winner would have their names engraved on their bottles to discourage secondary market sales.

Fast forward a little more than a year, and the United States can (finally) enjoy this exceptional Japanese whisky goodness: Same allocation, same packaging—but with a heftier price tag of $60,000. And if you’re lucky enough to have Bezos money, this shouldn’t be an issue for you.

This time, however, the massively restricted quantities (100 bottles) will now be available in other parts of the world: mainly the U.S., UK, France, Mainland China, Taiwan, Australia, Germany, and Singapore—starting this month. It won’t be easy to acquire, but I can assure you that if you’ve got the funds, or if you’re a collector, this is one investment I wouldn’t sit out on.

Fortunately enough, I had the pleasure of tasting Yamazaki 55, which is a blend of three exceptional single malts from the 1960s: Shinjiro Torii—Yamasaki’s founder—distilled the first stream in the dawn of the ’60s and partially aged it in mizunara oak, a deciduous oak strain that’s endemic to Northeast Asia. The second and third streams, by comparison, were distilled in 1961 and 1964 under the supervision of Suntory’s second master blender Keizo Saji—both of which were aged in American white oak. These three expressions were then picked and blended by chief blender Shinji Fukuyo in collaboration with Shinjiro Torri’s grandson—the third-generation master blender Shingo Torii.

“Throughout the process of blending Yamazaki 55, I used as inspiration the passage of time and ‘wabi-sabi—the Japanese belief that imperfections can help to ultimately contribute to perfection,” Fukuyo said in a press release. “While I often view other extra aged whiskies as art, I consider Yamazaki 55 to be more like a Buddhist statue: calm and mysterious, requiring time to truly enjoy inner beauty.”

And the result is nothing short of amazing.

After a significant number of maturation years, most (but not all) whiskies tend to lose their vibrancy and luster. At worst, ultra-aged whiskies oftentimes go too far to the point of mustiness, a too oak-dominant flavor, and a lack the distinguishing profiles that could have made them great.

Not so with Yamazaki 55, which retains the vitality the distillery is known for. Even its color is vibrant. With this expression, you get hints of fresh-cut grass in addition to more tropical flavors such as nearly-ripe mangoes, orange zest, ginger chews—all blanketed by the influence of the mizunara, which imparts subtle notes bitter citrus rinds, sandalwood, cedar shavings, and a tinge of sweetness that’s enhanced by the whisky’s mildly sweet and lasting finish.

Yamazaki 55 is quite special in that even a regular malt tasting glass isn’t a sufficient enough vessel to enjoy the liquid: Suntory recommends that all imbibers use a Burgundy glass to enjoy the full breadth and depth this complex whisky has to offer.

Beyond that, Yamazaki will be donating $5,000 for each bottle of 55 Year Old purchased—to benefit The White Oak Initiative: “Given that Yamazaki 55 is partially aged in American white oak casks, we’re proud to partner with the White Oak Initiative, which works to ensure the long-term sustainability of American’s white oak and the economic, social, and conservation benefits derived from white oak forests,” say Gardner Dunn, global ambassador at Yamazaki. “Beam Suntory is a founding member of this particular conservationist group and is committed to giving back to our communities that help us maintain our tradition of making the highest quality whiskies in the world.”

Duty-Free Retail Continues To Attract Highly Coveted Scotch Whiskies—And Set Records
TIE-DYING WITH GRACE | LEARN WITH LOUIS
Fresh Take: Modern Agriculture’s House Of Cards, Inside California’s Controversial Prop 13, And Why Private Label Is Having A Moment
How To Drive In Wine Country: The Virginia Edition
Your 70s is the best decade of your life – meet the women who prove it