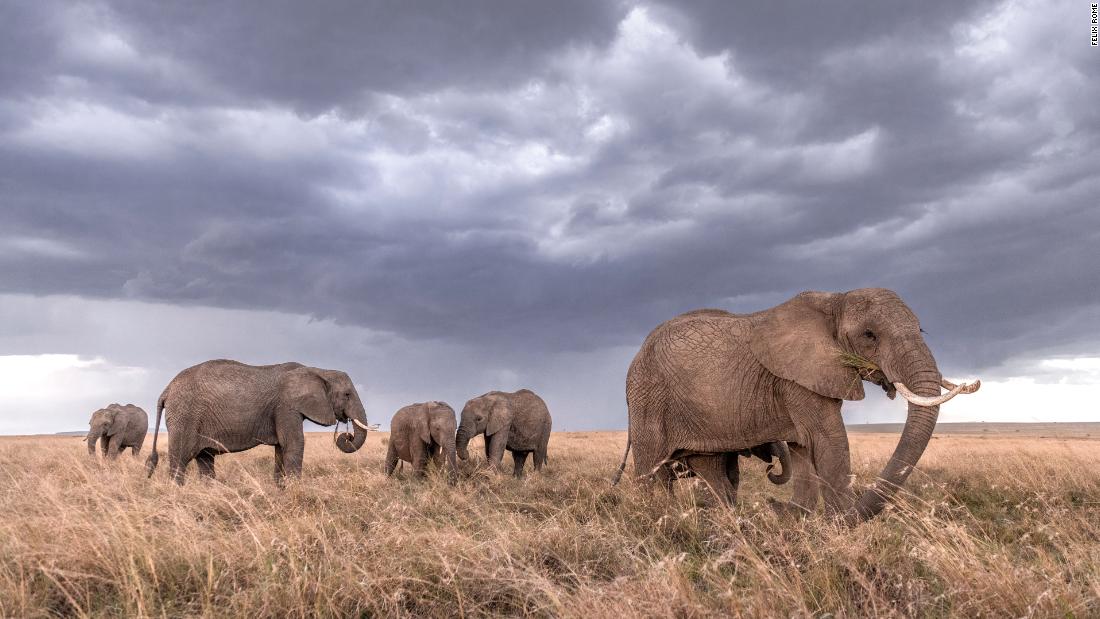 (CNN) — Despite his surname, Felix Rome never wanted to settle in an urban area. The Salisbury, England native trained as a photographer and eventually landed his dream job — staff shutterbug for a group of safari camps in East Africa.

Although Rome was hired to travel between Governor’s Camp‘s properties, the coronavirus pandemic had other ideas, forcing him to stay put in Kenya.

Though one of his job responsibilities was to join resort guests on their excursions to help document their experiences, Rome found himself essentially alone in the country. And that provided a different sort of opportunity — taking intimate photos of wild animals who suddenly didn’t have tourists around staring at them.

Rome arrived in Kenya in March and planned to be in the Masai Mara National Reserve for three months before moving on to the next property. But as travel in Kenya and throughout Africa became increasingly difficult amid the ongoing pandemic, he found himself staying put.

The entire country is currently under a curfew between 10 p.m. and 4 a.m.. Masks are required in public and large gatherings are off-limits until further notice. International flights were allowed to resume beginning in June.

Like housecats, lions spend a lot of their time sleeping — which means patience is key if you want an action shot.

The pandemic regulations dropped tourism at the Mara, normally one of the world’s big bucket list destinations, down to nearly nothing.

“Lack of tourists has been a big factor. I was driving around, I think it was about five weeks, where I didn’t see a single other car,” Rome says.

But that allowed him the freedom to dig in deep and not obsess over the quantity of photos he was getting every day.

For a traveler on a once-in-a-lifetime trip, this is a big concern. The more photos you take in a short amount of time, the more likely you are to end up with some great ones in the mix. But Rome’s unique position has given him the ability to simply hang out and wait for the perfect shot.

In addition to taking pictures, Rome maintains a YouTube channel about his experiences and will also share stories on his own and Governors’ social media accounts. His photos are used in ads for the hospitality group, and he’s allowed to sell prints of them through his website and retains final ownership.

Rome has the ability to spend eight or nine hours a day alone in the bush — no TV, no internet, no air-conditioning, nothing but him and a camera. But it’s not only about waiting patiently for a beautiful picture. He has also gotten the increasingly rare opportunity to just be alone with his thoughts.

One of his big projects has been documenting the Marsh Pride, a group of lions made famous by the BBC’s “Big Cat Diary.” Although they can look fearsome, lions — like their relatives, the house cat — sleep most of the day, meaning that getting a great action shot requires a lot of waiting around.

“The thing I love about wildlife is, you forget about your problems for that moment. You’re so focused on that lion or elephant that you almost become part of their world for that period of time. And you forget about paying taxes and getting your bills in on time.”

A group of elephants walk across the savanna.

Once tourists are able to come back, Rome will stay on in his role, which he alternates with another photographer. Many travelers like Rome to join them on game drives and other outings so that they can focus on enjoying the experience but still have incredible pictures to share afterward.

“I felt like I was the only tourist in Kenya,” says photographer Felix Rome.

You may not have top-of-the-line equipment or unlimited hours to spend hanging out near a pride of lions, but it is possible to take gorgeous wildlife pics from your next trip — whenever that may be.

Here are some of Rome’s suggestions:

— Make eye contact. Just taking a picture of an animal isn’t a feat in itself. A photo can go from good to great when an animal makes eye contact with the camera. Rome says that it’s the eyes that really cement the feeling of engagement in a picture.
— Don’t over-rely on the zoom lens. Sure, close-ups are great. But you don’t want to miss the savanna for the giraffes, and showing the background can differentiate your photos from ones taken at a zoo or nature preserve. “We can take a picture of that herd of buffalo with the escarpment in the background. And then you look at it afterward and think, yeah, that’s what we saw. Not just a portrait of a buffalo, which could be taken by anyone.”
— You don’t always have to take pictures every single second. “If you get one really nice picture of a lion, that will open the memories to all of the other times you were watching them. And I think that’s really key, rather than taking thousands of pictures of the back end of a lion sleeping in a grass or an elephant walking away.”