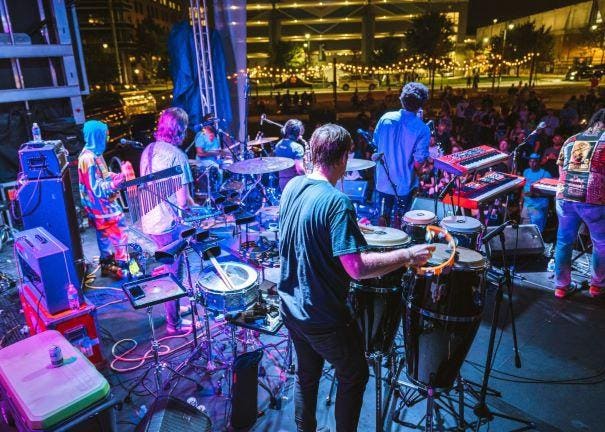 The producer of the nation’s first African-American beer festival is still waiting on the launch of an investigation more than a week after he and others say the general manager of Pittsburgh’s franchise of the international Hofbrauhaus brewery/beer garden chain verbally abused his vendors with racist language and potentially caused the peaceful fest to shut down early. Despite meeting with Hofbrau’s GM in advance and repeatedly inviting the brewery to participate in the fourth annual outdoor festival, Barrel & Flow Fest founder Day Bracey says Vince Quinzio may have inappropriately cut off electricity to the music stage next to the brewery. He says Quinzio did definitively call the police for baseless noise violations, prevent Black attendees from entering the restaurant and scream at production crews that his customers wanted “these niggers to leave” and to “get rid of these animals.”

“I’m used to the hatred as a Black man in America. For me it’s nothing new,” says Bracey, who’s calling for a temporary boycott of the brewery until he feels its local franchise owners take conclusive action against Quinzio. “What angers me is the reaction from Hofbrauhaus and SouthSide Works.”

Calling themselves “deeply concerned about what we’ve heard,” after a virtual meeting with Bracey last week, the franchise’s owners have taken to social media to announce they’ve suspended Quinzio pending results of an investigation. On Friday, they promised to announce the retention of an independent law firm to conduct said investigation within a few days.

Though Bracey has staged his internationally acclaimed beer and arts fest (voted the second best beer fest in America by USA Today readers) at various locations throughout Pittsburgh, this is the first time he’s held it at the open-air SouthSide Works National Historic District, which combines public performance spaces with riverfront walkways, apartments, and corporate retailers and eateries like Hofbrau. Approximately 2000 people of many races attended the ticketed Saturday event on September 11, which was permitted to run from mid-afternoon until 9pm. He says the local noise ordinance allows live music until 10pm.

Instead, Bracey says, after mysteriously losing electricity to one of the two stages several times, the SouthSide Works organization that owns the property in front of the stage manually unplugged the electric cables to shut down the entertainment at approximately 7:30. As a result, his Grammy-winning headliners couldn’t play. Bracey says he’s still waiting on answers from SouthSide Works, who didn’t return a phone call late Thursday afternoon, while the Urban Redevelopment Association, which owns the stage itself, is looking into the power problems, general event procedures and a possible lawsuit against Hofbrau.

Hofbrau employees have publicly shared anecdotes about toxic behavior by Quinzio and privately told Bracey that ownership doesn’t plan to fire him unless they can find audio or visual evidence of the accusations. However, Bracey says, franchise owners haven’t yet reached out to the witnesses he’s provided.

Despite expressing deep concern that the otherwise successful festival be overshadowed by these negative reports, two of the witnesses hired to manage elements of production shared their own dismay and disgust.

“The Hofbrau GM did some racist, shitty things,” emails Alex Bard, COO of the Hearcorp A/V, lighting and production agency. “I only saw the tail end of it when he showed up with 10-15 police shouting, ‘I have my own police.’ To the Pittsburgh police’s credit, when they got a handle on what was happening, they immediately diminished their number to about four officers and told the GM to go back inside or he would be arrested. To my knowledge, this was the fifth 911 call he made that day.”

“Yes, the manager from Hofbrauhaus was menacing and terrible to people during the fest … and he without a doubt did everything in his power to get in the way of (the) mission … to celebrate black culture & create deep connections with people,” emails digital content producer Buzzy Torek. “Ultimately, he failed at doing so as our photos are filled with nothing but smiles all around.”

Using the tagline “Black Arts on Tap,” Bracey designed Barrel & Flow expressly to provide and showcase economic opportunities for Black creative professionals with an eye toward elevating Pittsburgh — already home to one of the country’s most inclusive craft beer communities — as an attractive option for relocation and investment. Since its inception in 2017, the event has brought top Black and white craft brewers and brewery owners together with Black restaurateurs, visual artists, musicians, scholars, activists, poets, beer lovers and fun seekers.

“With so many witnesses and all this planning, bringing money and attention to this area … for Hofbrauhaus to bring racism to an anti-racist fest … their handling of this has been telling,” Bracey says.

Hofbrauhaus of America, which imports Hofbrau beer and serves as franchisor for the seven locations in the United States, has issued its own statement. Emphasizing that its franchises operate independently, the Las Vegas company writes, “We have been in contact with Hofbräuhaus Pittsburgh to ensure this situation is addressed and to ensure that the non-discriminatory standards of Hofbräuhaus are met.”

Penfolds Chief Winemaker Shares The Secrets Of Re-Corking
Camino Partners, Daniel Lubetzky’s New Investment Platform, Takes Wisdoms From KIND Snacks To Forge Individualized Paths For Young Consumer Brands
Yerba Mate Producer Guayakí Raises $75 Million In Fresh Funding Round
My Top Memorable Wines From Last Year Are The Wines You Should Find In 2023
John R. Tyson’s Settlement With Prosecutor Kicks Off What Could Be A Rough Year For Tyson Foods