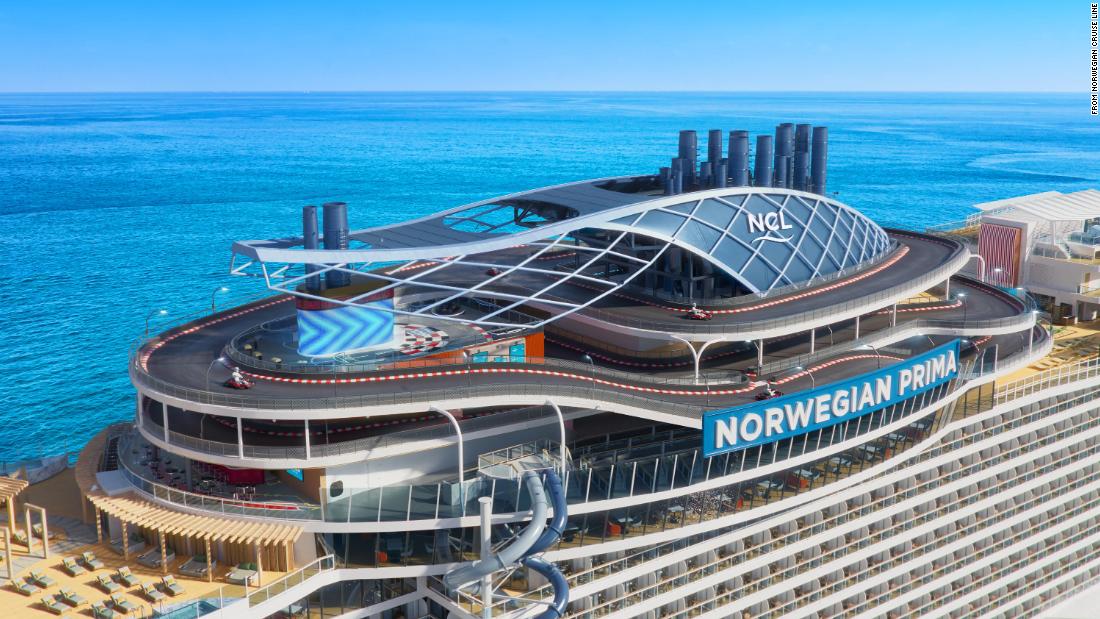 (CNN) — Cruise fans in search of high-speed thrills have something to look forward to now that Norwegian Cruise Line has revealed the jaw-dropping amenities on board its latest ship, the Norwegian Prima.

Due to set sail in August 2022, Norwegian Prima has become the cruise line’s most in-demand ship ever, says the brand, attracting record bookings when it launched in May. And that was before cruisers even had a chance to see its offerings.
Perhaps the biggest showstopper aboard Norwegian Prima will be the Prima Speedway, the largest and first ever three-level go-kart racetrack at sea.

The track stretches 1,378 feet (about 420 meters) and features 14 sharp turns. It can accommodate 15 racers simultaneously, with a section of the track offering open ocean views.

A rendering of the three-story Norwegian Prima racetrack.

The go-karts can hit speeds of up to 30 miles-per-hour, or 50 kilometers-per-hour.

It is the cruise line’s most ambitious racecourse to date, but it isn’t the first one.

Norwegian installed the world’s first cruise go-karts track on the Norwegian Joy (which debuted in 2017), followed by its Bliss (2018) and Encore (2019) ships.

Thrill-seekers will also be keen to experience The Drop.

Dubbed the “world’s first free-fall dry slide” to be offered by a cruise line, it’s a 10-story plunge slide that takes passengers rushing down the side of the ship, “experiencing the highest G-force of any comparable experience in the cruise industry,” says a Norwegian news release.

Those who want to add a competitive twist to the free-fall experience can try The Rush, which allows two guests to speed down at the same time.

The Drop is a 10-story dry slide that runs down the side of the ship.

Prima also claims to have the world’s first three-story cruise ship theater that can be transformed into a Vegas-style nightclub with an expansive dance floor for clubgoers.

In addition to a large musical performance, the theater will host interactive reality game shows familiar to American audiences, such as “The Price is Right.”

Other amenities include an indoor virtual gaming complex called The Galaxy Pavilion. It will offer 14 attractions including two escape rooms and the only Topgolf Swing Suite — a type of immersive golf simulator — at sea.

The Ocean Boulevard will include The Concourse — an outdoor sculpture garden with expensive artworks. And then there’s Infinity Beach, a seaside walkway with two infinity pools. Oceanwalk, meanwhile, features two glass-bottom bridges that hang over the ocean. La Terraza will be an open-air lounge area.

The Norwegian Prima was designed to maximize the use of outdoor spaces.

Ocean Boulevard is also home to three dining venues and a marketplace-inspired international food hall, all offering both indoor and outdoor seating.

It will also offer the largest variety of suite categories available at sea — 13 in total.

These include the 107 suites at The Haven, spread over eight decks and only accessible by an “ultra-premium keycard.” This exclusive section of the ship also has its own infinity pool, an outdoor spa with a glass-walled sauna and a cold room.

A rendering of the Norwegian Prima, which will set sail in 2022.

There is also an adult-only area, called Vibe Beach Club, with a bar and two infinity hot tubs.

The Prima’s inaugural summer voyage will be an eight-day journey in Northern Europe, from Amsterdam to the Norwegian Fjords and Baltic regions. The vessel will mostly cruise around the Caribbean in the fall/winter season.

This man and his dog spent seven years walking around the world
A Window On The Progress, Promise And Realities Of Indoor Agriculture
Captain Minnie Mouse, ‘Frozen’ and a $5,000 Star Wars cocktail: Disney pins big hopes on new Wish cruise ship
SHALL I SWAP TO PC?
The best family-friendly hotels in Spain to keep the entire tribe happy