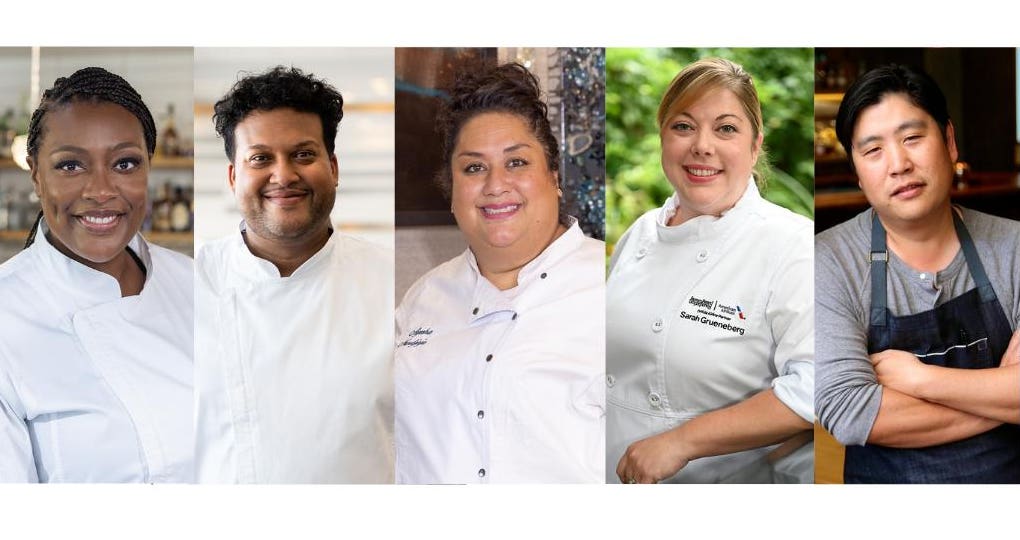 In 2019, American Airlines passengers in first or business class could enjoy such specialties as James Beard award-winning chef Sarah Grueneberg’s spinach and ricotta rotolo, mushroom bolognese and artichoke ravioli either in-flight, or at the Flagship Lounge at Chicago’s O’ Hare International Airport. It marked the latest partnership between the airline and the James Beard Foundation, with the shared goal of showcasing and celebrating the diversity of regional cuisines in the US.  The former “Top Chef” contestant and head of Monteverde Restaurant and Pastifico in Chicago was the first chef chosen to kick off the partnership.

Then Covid-19 happened, forcing American Airlines to close its Flagship Lounges across the country in March 2020 as part of a comprehensive effort to implement health protocols.

This September, the airline began reopening its Flagship Lounges, beginning with New York (John F. Kennedy International Airport) on September 14 and Miami on September 28; Dallas, Chicago and Los Angeles are scheduled to open later this fall. Travelers can look forward to menu items specially prepared by chefs from the James Beard Foundation, each showcasing familiar flavors from their respective regions.

“We are really committed to gender equity, racial equity and environmental sustainability, and really trying to widen the platform and the spotlight in terms of who we as an organization bring into the fold and celebrate, and American Airlines was really enthusiastic about it,” James Beard Foundation COO Kris Moon shares.  (American Airlines has been the official airline partner of the James Beard Foundation since November 2019.)

“Our values of introducing diversity in the culinary space really line up well,” adds Raphael Girardoni, managing director of Premium Guest Services at American Airlines. “Diversity is so important to us at American and we are happy we can partner with James Beard to support their mission to introduce more diversity amongst chefs.”

While the chef selection was a collaborative effort between the airline and the foundation, there were a number of important common denominators, including that each one is a local chef deeply entrenched in their community and passionate about representing flavors native to their city or region, and as Moon notes, whom the foundation has worked with previously. The group includes chefs who have won Beard awards, been nominated for Beard awards, cooked at the Beard house, and have been spokespersons for the Foundation. They are Tiffany Derry of Roots Southern Table in Dallas, Timon Balloo of Balloo and Sugarcane in Miami, Ayesha Nurdjaja of Shuka and Shukette in New York, Sarah Grueneberg of Monteverde Restaurant & Pastifico in Chicago, and Brandon Kida of Hinoki & the Bird in Los Angeles.

Ahead of the opening, I got to preview chef Balloo’s dishes at the Miami Flagship Lounge. They a refreshing tuna tataki dressed with yuzu ponzu, a ceviche made from Florida snapper, slow-roasted salmon glazed with aji panca served with cilantro rice, and a 24-hour marinated Korean BBQ skirt steak. On the cocktail side, he has a Caribbean Hibiscus Cooler, where passengers can choose their spirit of choice, to mix in to the Cointreau, hibiscus syrup, lime and soda.

Balloo, who was nominated Best Chef: South by the James Beard Foundation in 2020 and whose heritage is Chinese-Trinidadian-Indian, had a few deciding factors in putting together his menu. “[The airline] really wanted to highlight both regional flavors and the chef’s personality, and at the same time, consider that many of their clientele would be flying for long durations at a time. They wanted to keep the menu clean and light and have some healthy alternatives. Also, having been a chef in South Florida for 25 years now, I wanted to highlight the Latin American, Caribbean and Asian cultures, our usage of seafood and tropical ingredients.”

Timon adds, “This whole activation creates dialogue, and that’s ultimately what my food does. I would like to think a result of this activation with so many diners coming through, is to have them ask questions like, ‘Why does this make sense?’ and to dig deeper. With dialogue comes education, and through that, we learn.”

*Previously only travelers flying on Flagship First and Flagship Business one eligible flights could access the Flagship Lounge. But as part of its reopening, American is also now offering the Single Visit Pass for $150, available for customers traveling on flights operated by American or a One World Airline, which are valid for same-day, one-time use where they are purchased.