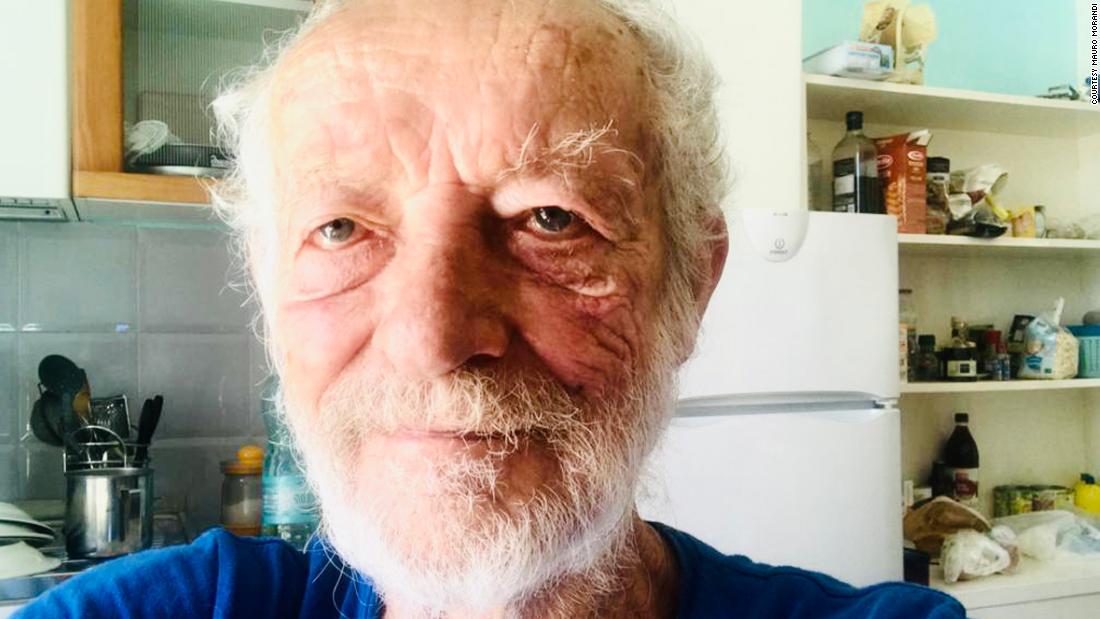 (CNN) — For nearly 33 years he lived a hermit life on a beautiful island in the Mediterranean, where he was the sole inhabitant.

Mauro Morandi, known as Italy’s Robinson Crusoe after developing a loyal online following, was caretaker of the Sardinian island of Budelli, embracing silence, solitude, and the peacefulness of nature while living in an old beach stone hut.

There was no social buzz, no fancy food, no friends — his only companions were birds and cats. He slept on a cot and had few clothes. Forsaking all comforts, he preached a monastic existence of self-reflection and meditation on Budelli’s pink beach dotted with coral dust.

Then his blissful world came to an end.

After years of struggling with marine park authorities that wanted to evict him to turn the isle into an environmental observatory, in May Morandi accepted his fate. After posting a pithy message of resignation — “My balls are broken” (slang for “I’m fed up”) — he left.

Moving home and starting a new life can be tough for anyone. Even more so for an 82-year-old who has spent three decades living a solitary existence on a paradise island. Is it possible to move on and readjust?

Says Morandi, the answer is an emphatic “yes!”

“It’s never really over,” Morandi tells CNN. “I’m the living proof that a second, new life is possible. You can always start all over again, even if you’re over 80, because there are other things you can experience, a totally different world.”

Proving his point, Morandi has apparently been thriving since moving back to civilization on the inhabited island of La Maddalena, not too far from Budelli.

“I’m happy and I have rediscovered the pleasure of living the good life and enjoying everyday comforts,” he says.

Using his pension from his former life as a teacher, he’s bought himself an apartment with all the luxuries he lacked before.

Morandi has been sharpening his skills as a communicator. After years of solitude he’s now eager to talk to people, exchange views and post photos and comments on social networks to interact with the world. He’s also been writing his memoirs.

Morandi’s new home comes with a fitted ktichen — a luxury compared to his old hut.

“For a long time I have lived alone, and for too many years after I first landed on Budelli I didn’t feel like talking to anyone,” he says. “True, I cannot enjoy the island’s solitude anymore but my life now has taken a new turn, focused on communicating with others and being near other people.”

Morandi, originally from Modena in northern Italy, arrived at his former home on Budelli in 1989 by accident while attempting to sail from Italy to Polynesia. He fell in love with the atoll’s crystal-clear waters, coral sands and beautiful sunsets — and became its caretaker.

….And a kingsize bed.

While encountering occasional island visitors, he has mostly lived alone. In recent years his online presence, posting images from Budelli, saw him connecting with a virtual community.

Now he has the real thing. His tiny whitewashed new home, complete with panoramic sea-view terrace, is in La Maddalena’s bustling tourist town, albeit tucked away in a quieter location that ensures his privacy.

He says he misses the silence of Budelli. He’s not accustomed to the noise of cars, trucks and “motorbikes with broken mufflers rolling by outside,” but all in all he likes his new surroundings which he finds quite relaxing.

Morandi has been savoring fresh seafood dishes since leaving the island.

Perks include a brand new, fully equipped kitchen, a bedroom with a kingsize bed and — the greatest luxury of all — a shower. He also has shelves stacked with books.

Another bonus of returning to civilization is the rekindling of an old flame. Morandi now shares his new abode with a former sweetheart from his youth.

And then there’s the food.

Savoring again delicious dishes he hasn’t had in decades has reminded him of the ‘”taste of life” and all he’d forsaken, he says, such as indulging in wines and liqueurs with friends after dinner.

But he’s not stuffing himself with gelato, pizza or ham. He’s ravenous for something which was plentiful on Budelli yet impossible to eat: fish.

“I still keep leading a simple life, in the morning I go down to Cala Gavetta to buy fresh fish from the net. Finally, after so many years of abstinence, I can enjoy fish again. This might sound incredible, but I can’t have enough platefuls of fresh and crispy fried fish.

“On the island I had no boat so I couldn’t fish, and the food was scarce and limited. I always had to wait for people to bring me groceries from the mainland, and when they couldn’t come, I had to make do with what I had. Here, if I need to buy anything I just walk into town.”

Morandi admits living on Budelli had become tough, particularly during the last winter which brought colder than usual temperatures and gloomy conditions that meant his solar-powered fridge failed to keep food fresh, leaving him relying on canned food for months.

He still recalls the first time he ate fresh fish again when, during a post-Budelli trip to the Italian Alps, he was staying with a friend who owns a restaurant where he savored both the mountain landscape and the gourmet cuisine.

“It was magnificent, I discovered there was beauty even there: the scenery, the mountains, the food. I had the best linguine allo scoglio (flat spaghetti with seafood), and it was way cheaper than in La Maddalena. After all, the freshest fish in Italy isn’t found in Sardinia but is shipped to northern markets such as Milan.”

Morandi toured the Italian Alps after leaving his island home of 33 years.

Morandi documented his back-to-earth trip by posting photos of himself online eating grilled soles with potatoes and tomatoes, exploring Mont Blanc and visiting quaint mountain villages. He plans to return to the Alps at Christmas.

It’s a change of view from last year when, Morandi, talking to CNN, said he was ready to do all he could to stay on Budelli. “I wouldn’t know where else to go live, certainly not back home in the north, nor what to do, this is my life,” he said at the time.

Now he delights in his daily routines on La Maddalena.

“In the morning I have breakfast out on my terrace with barley coffee,” he says. “Then, once I have enjoyed my cigar, I go for a walk down to the port along a tiny path connecting my house, or to the village where I meet people and buy groceries.

“I walk a lot, the doctor says that’s the best way to cure my aching leg, but often people give me a ride back home so I don’t need to carry heavy bags.”

Now fully vaccinated for Covid-19, and happy to wear a mask in public, he enjoys mingling with locals.

“I was amazed at how many are friendly, and I’m usually invited for coffee, lunch or dinner,” he says. “I was worried locals would not give me a warm welcome. I’m happy that not everyone hates me, just those who were jealous of the life I led on Budelli. Many are fond of me. They come up and congratulate me on my fight, they want to take pictures with me”.

Many people, especially abroad, perceived him as a hero for dedicating his life to safeguarding the isle, while others claimed he was using a “bon sauvage” romantic myth to hide the fact that he was an illegal occupant.

Morandi has been catching up with old friends.

The authorities told CNN they were simply upholding the law by “restoring the illegal structure” in which Morandi lived — a former second world war radio station. They said he “had no title” to stay on the island given it was no longer private.

Morandi’s battle to stay made global headlines, and even now he’s gone, he’s still in the spotlight. He’s written a book on his castaway island life, is planning a second one and says his story might soon become the subject of a movie.

So how does he see himself in a few years, what’s his future going to be? Morandi says he’s settling down for good in La Maddalena: “I’ll be right here. The most pristine sea and beach, Punta Tegge, are nearby and I can move around on buses if I need to.”

Would he go back if park authorities changed their mind?

“I don’t long for it,” he says “However I might be willing to return as caretaker only if this time round I get paid to do my job. I won’t work for free again.”

Budelli isn’t completely in his rear view. Morandi occasionally returns on day-trips to collect a few personal belongings he has left behind.

He still worries about the future of the island. As caretaker he regularly chased away tourists trespassing on the off-limits pink beach, cleaned rubbish off the sand and stopped intruders from landing at night.

For now, La Maddalena is his new world — one which he plans to discover.

“I’ve been on that isle so long and this place was so close all the time, I realize just now that I don’t know it.”

So each day, when he walks around town, he takes pictures of quiet, forgotten spots, perhaps still hunting for that lost silence.