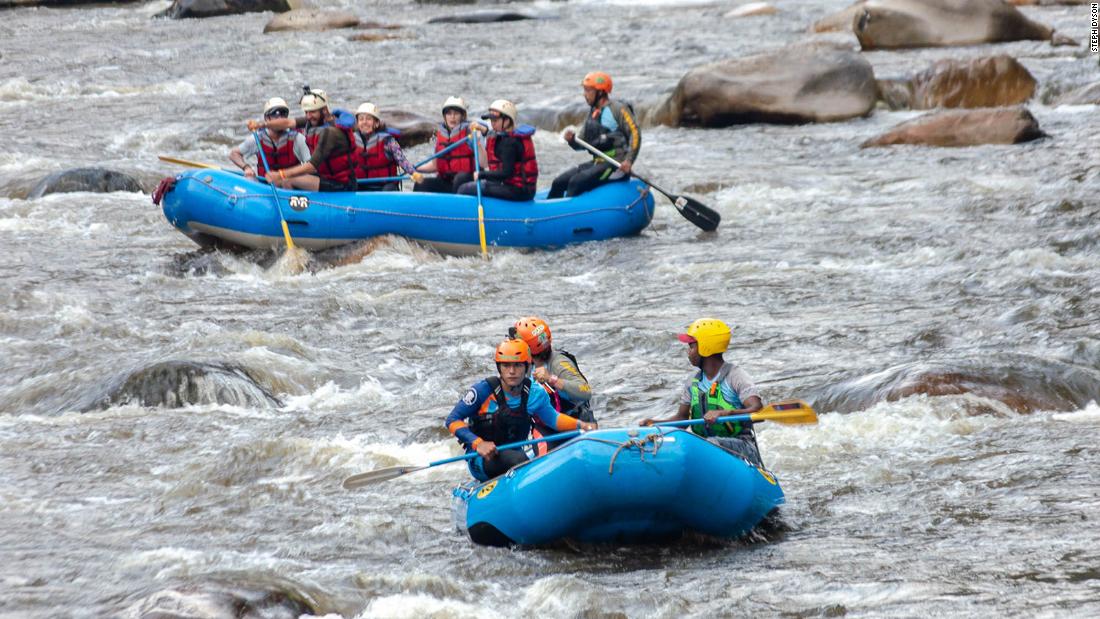 (CNN) — The water is cold and shouting echoes across the river. As the boat approaches the rapids, a roar goes up to hold still, before a shout of “PADDLE” and the six rafters dig into the tumbling waters in an impressively synchronized display.

As they are released by the rapids with barely a splash in the hull, you would never guess that some of these men and women are more accustomed to bearing arms than oars.

The River Pato in the Caquetá department in southeast Colombia was once one of the main battlegrounds between the Revolutionary Armed Forces of Colombia — People’s Army (known by the Spanish acronym FARC-EP) and the Colombian government.

A divisive group viewed alternately as Marxist vigilantes fighting for rural rights or a dangerous criminal organization, they surrendered their weapons in 2016 following a landmark peace accord. FARC leaders were given non-voting representation in Congress and the rank and file the opportunity to return to civilian life.

Thousands of men and women poured out of jungle camps and, with the support of the governmental Agency for Reincorporation and Standardization (ARN), moved into ready-made communities built to reintegrate former guerrillas back into society.

Clinging to a cliff edge above the rumbling foam of the Pato River, Miravalle is one of them.

Home to fewer than 50 people, this row of one-story concrete buildings with flimsy corrugated metal roofs feels peaceful but full of life. Fathers push children down the village’s only street in prams, while members of the army, who have a base nearby, stop to chat idly with locals sharing a cup of coffee outside their homes.

Compared with the other 25 communities across Colombia that house a mixture of former combatants and civilians, Miravalle is unique. Here, the community is using rafting to broker peace.

Miravalle is perched above the Pato River.

Recovering from a 52-year conflict

The downing of arms by the FARC marked the end of a 52-year conflict played out in primarily rural Colombia. The bloodshed took over 220,000 mostly civilian lives and displaced more than seven million Colombians.

Miravalle and the Pato River sit within the El Caguán river basin, an area roughly the size of Switzerland. It has a fraught history. It served as the unofficial capital of the FARC’s activities, becoming a demilitarized zone under FARC control for three years in the early 2000s, after the army withdrew as part of peace negotiations. When these failed, the region returned to violent power struggles.

It’s easy to understand how the terrain provided perfect cover for the guerrillas to maintain a strategic hold on the region for so long. These remote and ferociously inhospitable highlands are heavily forested, sitting at the transition point between the Amazon jungle and the foothills of the Andes Mountains.

Undulating hills perpetually capped with mist are blanketed by tropical forests, while serpentine rivers dissect the land, carrying away some of the highest rainfalls in the Amazonian region.

Now this nine-kilometer stretch of Class III to IV rapids is showing how tourism can help heal deep wounds. Visitors can learn about the conflict from the mouths of the former guerrillas themselves and their civilian teammates who lived through it on the other side.

A cartoon compares the past and present as residents take up oars.

A new form of tourism

On a clear but characteristically damp day in April, conditions are ideal for tackling the foaming rapids of the Pato River, a body of water considered among the best in Colombia, if not South America for rafting.

Gentler paddling along the Class I and IIs of Fisherman’s Canyon is also on the cards. It’s an afternoon spent drifting through this narrow canyon, whose steep walls have been whittled into bulbous shapes by millennia of rainfall and drip with vegetation. High above, macaws — one of over 460 bird species residing in the region — roost in fissures in the rock.

The calmer waters of Fisherman’s Canyon provide some gentler paddling.

In Miravalle itself, there’s the Museo Local de Memoria Histórica (Local Museum of Historical Memory) to visit. Founded using donations from community members, its exhibits are nothing short of fascinating. One such exhibit is a copy of the handbook used to train FARC recruits, which shows you how to do everything from launching a grenade to setting up an orderly camp. It is a stark but engrossing window into the world that the guides at Caguán Expeditions have left.

While a glimpse into the logistics of war might mesmerize and disturb in equal measures, the guides are careful not to glamorize the conflict. Instead, changing perceptions about the region is high on their list.

“One of our dreams is to show Caquetá from another perspective. In some parts of the country, they associate it with violence, insecurity and drug trafficking. But what about the beautiful landscapes?” says 44-year-old guide Hermides “Profe” Linares, a 30-year veteran of the FARC.

Guide Hermides “Profe” Linares, a 30-year veteran of the FARC, is proud to show off the area’s natural beauty.

‘Rivers can be used for peace building’

“Rafting was always at the back of my mind”, says 38-year-old Duberney Moreno, captain of the community’s rafting team, Remando por la Paz (Rafting for Peace), and a member of the FARC for 13 years. He is warm, jovial and very easy to like — as are all eight guides who head up Caguán Expeditions and lead guided rafting trips on the Pato River.

It all started a few years ago when former FARC commander Hernán Darío Velásquez, better known as “El Paisa,” brought rafts to the region and secured the help of the Colombian National Training Service (SENA) to take people out on the river.

But it was only when Mauricio Artiñano, a research officer with the United Nations Verification Mission in Colombia, visited in 2018 that everything changed. He contacted Rafael Gallo, owner of Costa Rica-based rafting operator Ríos Tropicales and founding member of the International Rafting Federation (IRF).

Gallo immediately recognized the river’s potential for commercial rafting and sent two of his instructors to Colombia in August 2018. A month and a half of intense training in raft guiding, kayaking, river safety and rescue skills followed.

“We extended an invitation to everyone who wanted to join and be part of the team. About 20 people showed up,” recalls Moreno. Interest quickly waned. “On the third day, three people were leaving, the next day another two gave up until we ended up with eight people, the ones we remain today,” he says with a snort.

A mix of ex-fighters and civilians, all eight were certified as guides by the IRF in an official graduation ceremony attended by members of the UN and the Colombian government.

Rafting has since taken them across the world. In 2019, the team competed at the World Rafting Championships in Australia under the moniker Rafting for Peace, a name adopted after they were asked to participate using the newly established IRF Peace Flag. Before they left home turf, the minister for sports presented them with the Colombian flag, a moment symbolizing the vast transformations that the region — and the community — have experienced.

The rafters didn’t know it at the time, but using rafting for peace after a prolonged conflict isn’t a new idea. After all, it’s a sport that requires extreme teamwork to avoid planting everyone in the water.

The roots of the rafting federation (IRF) lie in the end of the Cold War, when Russian and US rafters were brought together to raft in Siberia. Ever since, “the IRF has been interested in seeing how rivers can be used for peace building across different countries,” explains Artiñano.

‘We’ve crossed into a new world’

In a country still struggling to heal, inviting visitors into the region for frank discussions about the conflict, its origins and its impact may be a salve to these wounds.

This is the belief of Lizeth Riaño, CEO and co-founder of the non-profit Collective Impulse and former chief impact officer at Bogotá-based tour operator Impulse Travel. Both organizations have played an integral role in financially and strategically supporting Caguán Expeditions, as well as other peace-building projects across the country.

When tourists arrive, “the guides tell their stories over and over, they talk about the hardships, work through the trauma, and create an incredible sense of empowerment and self-recognition,” says Riaño.

It’s a perspective shared by Mauricio Artiñano. He views tourism projects founded in the wake of the peace accord as offering real possibilities for peace building. “For Colombia to move past the horrors that happened for more than 50 years, it’s important to build bridges of dialogue and reconciliation. Tourism is one way of doing that.”

Talking about rural life and the history of how the conflict occurred is of uttermost importance to the guides. “It is our duty to tell these stories because they are the root of what really happened,” says Frellin “Pato” Noreña, a 33-year-old ex-combatant who joined the FARC when he was 16 years old.

Wherever you go in Miravalle, there’s a palpable sense of pride in what rafting has achieved. Once a frontier and battlefield between the FARC and government forces, now the River Pato is a neutral place where civilians, ex-FARC and even on occasion the army, row together.

“Before, the river was dark and you didn’t know what was on the other side,” says Noreña, staring across the Pato River. He looks visibly relieved as he says, “Now we see over it and we see tourism. It’s like we’ve crossed into a new world.”