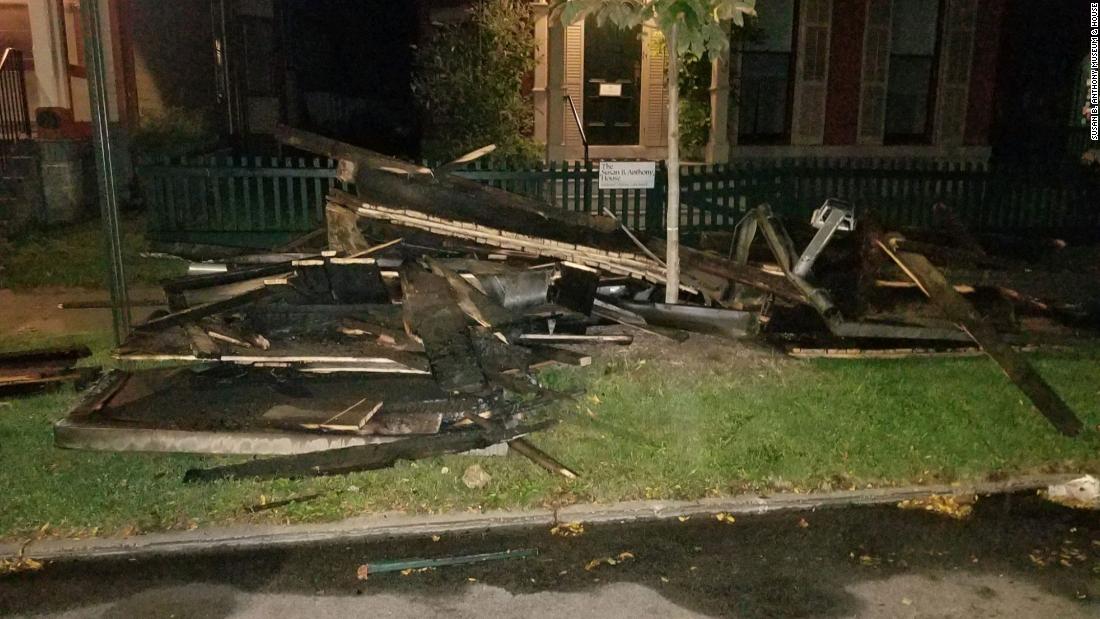 Travel
Share on Facebook
Share on Twitter
Share on Pinterest
Share on LinkedIn
The Rochester Fire Department (RFD) responded around 1:00 a.m. to an automatic fire alarm at the residence that once belonged to Anthony, a leader of the women’s suffrage movement. The fire burned through the home’s back porch.
The Rochester Fire Investigation Unit listed the cause of the fire as suspicious, but the final cause remains undetermined and is still under investigation, RFD spokesperson Lt Jeffrey Simpson told CNN.
Cameras on the property showed a person standing in the back yard and on the back porch right before the fire started, Susan B. Anthony Museum and House president Deborah Hughes told CNN.
“We don’t know why someone would do this, it may have been a random or intentional act, or it may have been someone responding to the museum being a supporter of women’s rights since we are in a contentious era. It’s hard to know for sure,” Hughes said.
Firefighters relocated artifacts into a safe part of the house and took great care entering the home, stopping any extension of fire, smoke, or water damage from entering the house, according to Simpson.
“The firefighters were so careful with the artifacts, even moving pictures while keeping them in the right order,” Hughes said. “They were extremely conscientious about making sure not too much water got into the house.”
The back porch, which was over 100 years old, was a complete loss and was taken down to secure the structure and make sure the house was safe, Simpson said.
“The damage to the building was purely on the outside back porch of the structure,” he added. “There was some minor extension into the building because it broke through the door, but it was only some water and smoke damage on the first floor.”
The home was built in 1859, and Anthony lived in the home — which also became headquarters of the National American Woman Suffrage Association — from 1866 to 1906, the year she died.
“The Rochester Fire Department has long understood the significance that this property holds both to our local community as well as the nation,” Battalion Chief Joseph Luna said in a statement. “A great job was done by the firefighters tonight in limiting the effects of the fire on both the museum and its displays.”
Anthony is known for her work for woman suffrage and her arrest after voting in the 1872 presidential election when it was illegal for women to do so. She also spoke out against slavery and was instrumental in getting colleges to admit women.
“Anthony was all about trying to build a more just society and we just hope that what people get out of coming to the house inspires them to continue this work,” Hughes said.
The defiant suffragist worked tirelessly for voting rights for women, but died 14 years before the 19th Amendment — later known as the Susan B. Anthony Amendment — was ratified in 1920.
“It is so clear how much this house matters to the community, our neighbors, and even our firefighters. They were deeply moved with not only taking the responsibility seriously, but feeling like this is a national treasure,” Hughes said. “What could have been really tragic, thanks to the amazing work of the firefighters, was a sad loss but we will be okay.”
The process to rebuild a back porch will begin as soon as possible, Hughes said.
This article was originally published by Cnn.com. Read the original article here.
Share on Facebook
Share on Twitter
Share on Pinterest
Share on LinkedIn

Wine Industry Report Offers Insight Into DTC Sales In 2023
Visit the Home of Punxsutawney Phil for Groundhog Day
The Trailblazers: Introducing Dishare
Eat Local If You Want, But Not For Climate Reasons
Welcome To The Year Of Yaupon Tea