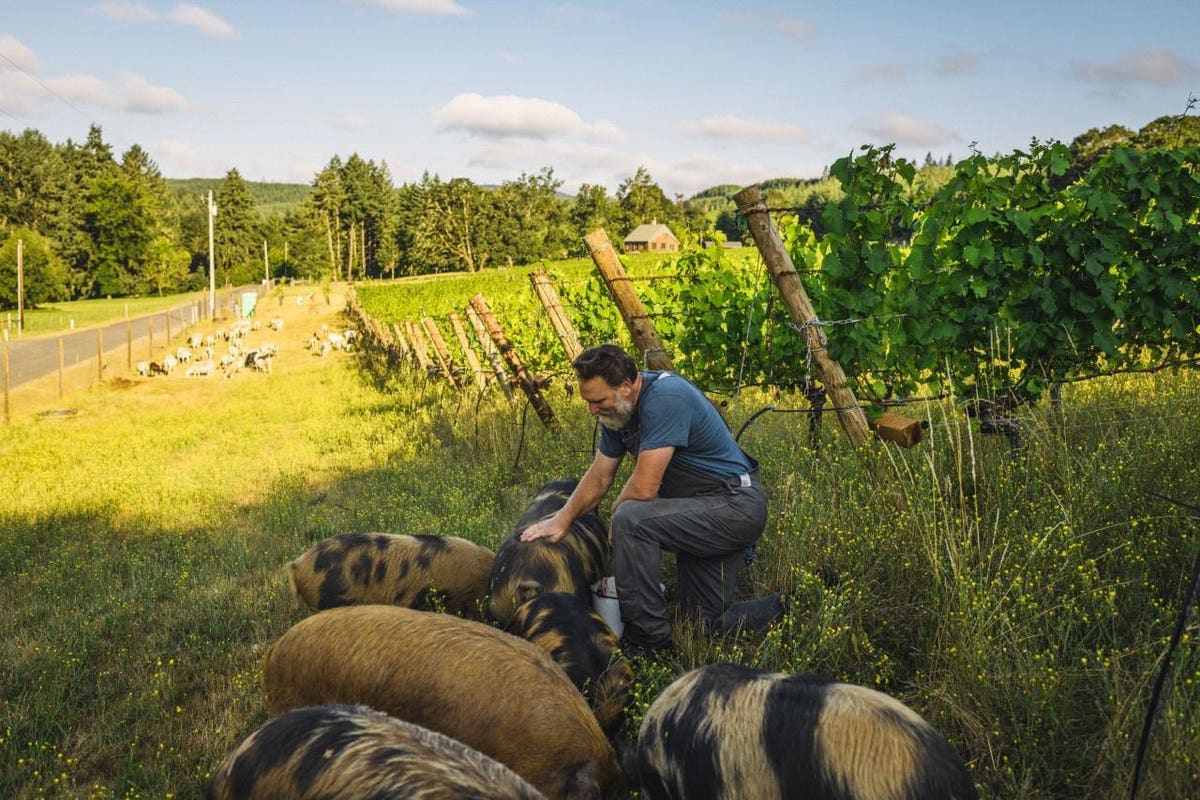 Antiquum Farm near Junction City, in Oregon’s south Willamette Valley, brings to mind a place from a storybook. The Farm Cottage tasting room echoes thatched roofs of rural Ireland. The Kune Kune pigs lounging at the edges of the vineyard elude a satisfied sense of contentment. Maremmas breed livestock guardian dogs pose a confident sense of quiet vigilance. Goats and sheep look up from a munch to watch a car drive by.

It’s easy to forget that this isn’t for looks, that Antiquum is a working farm and vineyard, producing Pinot Gris and Pinot Noir along with grass-feed geese and lamb. Pasture raised quail and chicken eggs too, plus local honey. The pigs are new to the biological mix of the vineyard, and they are chill, soothing to watch. “They are anti-stress,” says Steven Hagen, owner of Antiquum Farm.

It’s true that the place does give off a low tech, cottagecore vibe, but this farm is actually buzzing with life. Hagen, like many low intervention vignerons, doesn’t use chemicals and is guided by the concepts of biodynamic farming, particularly the tenet of a closed farm ecosystem. “I’m fascinated with terroir and what makes this place tick,” says Hagen. “How do you get place and time to articulate through wine?”

Since 2010 his farm has been “fluidly” working as a closed ecosystem, though the process began around 2004. One of his main problems in the early days: fertilizer. On-farm generated compost for a 20 acre vineyard would amount to what Hagen describes as a “massive” pile. But bringing it in from elsewhere didn’t jive with the premise of a truly self-sufficient environment.

“Outside fertilizer, in a macro sense, is the same material that everyone else is using,” says Hagen, noting that the sources for organic compost are relatively small in number, and often require hefty transportation tolls to get the material to the farm. Plus, it’s a homogenized product that doesn’t reflect the nature of the individual vineyards or plots.

His ah-ha moment was realizing that he could get rid of compost altogether if the right amount of organic matter could be generated directly in the field. Hagen’s Grazing-Based Viticulture method (a term he coined himself) relies on animals, not external inputs.

The animals at Antiquum Farm are rotated strategically, grazing on the “above ground biomass” of native cover which is then redistributed to the soil, carried by the microorganisms that populate it. This results in a “sustained hum” within a healthy microbe population. “The wines have only gotten better, more interesting,” says Hagen. “It’s a truthful and beautiful expression of home.”

Meanwhile, the animals have other jobs. Pest mitigation happens on their watch: sheep and pigs expose insects through which geese and chicken pick their way. Hagen calls them the “sanitation crew” which can be deployed to certain spots where they will gobble up pests and scratch at weeds. “Each animal brings another layer of complexity,” he says. “The more we have, the more resilient and alive this place will be.”

Goats and pigs also make good fire mitigators. Grazers munch and trample low forest vegetation, mowing their the way through fuel sources that can ignite quickly during a fire. As they rotate through the forest they clear an understory of non-native species that the local wildlife can’t utilize in their diet or habitat. Hagen says that in two weeks the goat and pig crew cleared three acres and that they’ll be at it until the reserves are exhausted. Perhaps they’ll take the show on the road after that, helping out the neighborhood.

Because the animals at Antiquum Farm are bred or selected specifically for this space, they are able to sustain themselves by grazing, eliminating the need to store feed, which could also be considered a fire fuel source. “It took almost twenty years to get the best sheep,” says Hagen. “Specifically selected to thrive on our resources.”

The guardian dogs — Opal and Dewey plus some of their pups, born in 2020 — are the “glue that holds Grazing-Based Viticulture together,” says Stephen, “warding off everything from hawks and eagles to black bear and mountain lions,” which can weigh in at up to 250 pounds. Before the dogs arrived, the farm lost 38 sheep — since then, just one sheep and one goat.

Andrew Bandy-Smith, winemaker at Antiquum Farm, notices that the regenerative farming practices in the vineyard allow for steady during the season. “Slow growth allows for a balanced nutrient load, not just for health, but for flavor profile,” says Bandy-Smith. “A more nutrient dense grape equals a more complex grape.”

Tastings at Antiquum Farm happen in the Farm Cottage and are private experiences, reservation only. Hagen promises that it will be an immersive experience, with a principle person from the family or farm. “When people visits us, they melt out of day to day life and into the farm,” says Bandy-Smith.