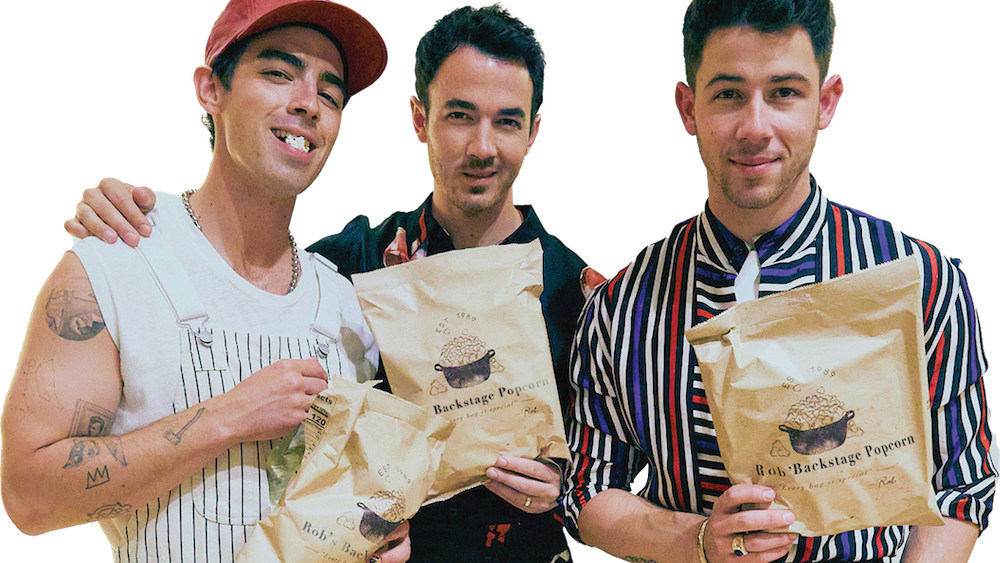 When the Jonas Brothers (Joe, Kevin and Nick) go on tour—like they are right now—backstage snacks are a must. Favorites include dark chocolate, Mindright bars (a superfood startup that Joe has invested in) and a once top-secret popcorn recipe that launches as a direct-to-consumer CPG product today.

Starting a popcorn brand might seem a bit random for a pop rock band, but there’s a story and genuine passion behind it all. The “Rob” of Rob’s Backstage Popcorn is Rob Garbowsky, father of Greg Garbowsky who is a longtime friend of the Jonas Brothers, as well as their former bass guitarist and a current member of the band’s management team. Rob created the secret seasoning mix more than three decades ago, and when Nick tried it years later he loved it so much that he convinced Rob to start making it for the Jonas Brothers crew. Kevin and Joe quickly hopped on the popcorn train and Rob’s popcorn was the unofficial backstage snack on the Jonas Brothers’ 2019-2020 Happiness Begins tour.

“When we all first tried the popcorn in 2009, we just fell in love with it,” Nick told me. “We fell in love with the really unique seasoning and we continue to request it every time we’re in the New York and New Jersey area.” The brothers later approached Rob about starting a popcorn brand given their passion for offering fans unique experiences through their shows and partnered up with The Naked Market to bring the brand to life.

Creating the popcorn brand, from working with Rob and Greg to perfect the recipe to partnering up with The Naked Market earlier this year, was a process that took about 2.5 years. Jonas Brothers fans on the Remember This tour have gotten a first taste of Rob’s Backstage Popcorn. Harrison Fugman, founder and CEO of The Naked Market, told me that the team has kept things “intentionally mysterious,” with today’s nationwide launch of the popcorn and associated campaign officially letting fans know that the Jonas Brothers not only love Rob’s Backstage Popcorn, but are part of the team that helped to create it.

As for the flavor of the popcorn, Kevin described it as “savory, but in the best way possible.” He told me, “It’s definitely one of those flavors that’s so unbelievably unique but also familiar; it feels like home cooking in a bag, and is something that you just can’t get enough of.” If Rob’s Backstage Popcorn was a Jonas Brothers song, it would be “Lovebug”: classic, familiar and (hopefully) as enduring as the band’s 2008 hit.

Rob’s Backstage Popcorn is the first celebrity collaboration for The Naked Market, which has been launching food and drink brands since the end of 2019. Their portfolio also includes Project Breakfast (a protein drink), Flock (crispy rotisserie chicken chips), Avo Crazy (avocado puffs) and Beach House Bowls (ready-to-eat açai smoothie bowls). “Every brand that we launched in the first year and a half of the company have been owned and operated by us,” Fugman told me. “We’re really focused on building brands that have authentic stories behind them and products that taste amazing. We bring it all together by going after big categories with favorable competitive dynamics.” Their collaboration with the Jonas Brothers checked all of their boxes.

While Rob’s Backstage Popcorn has only just launched as a direct-to-consumer product available for nationwide delivery, the Jonas Brothers are already thinking ahead to what’s next for the brand. “We have lots of ideas for other flavors that Rob’s working on in the kitchen right now, and we’re excited to try them,” Nick told me. Whether additional flavors take the form of limited drops or permanent expansions to the brand, their fans are top of mind. “We love to bring great experiences to our fans, and anything we can do that enriches their night or their life for that moment is a really special thing for us and we’re grateful we get to do it.” Nick said.