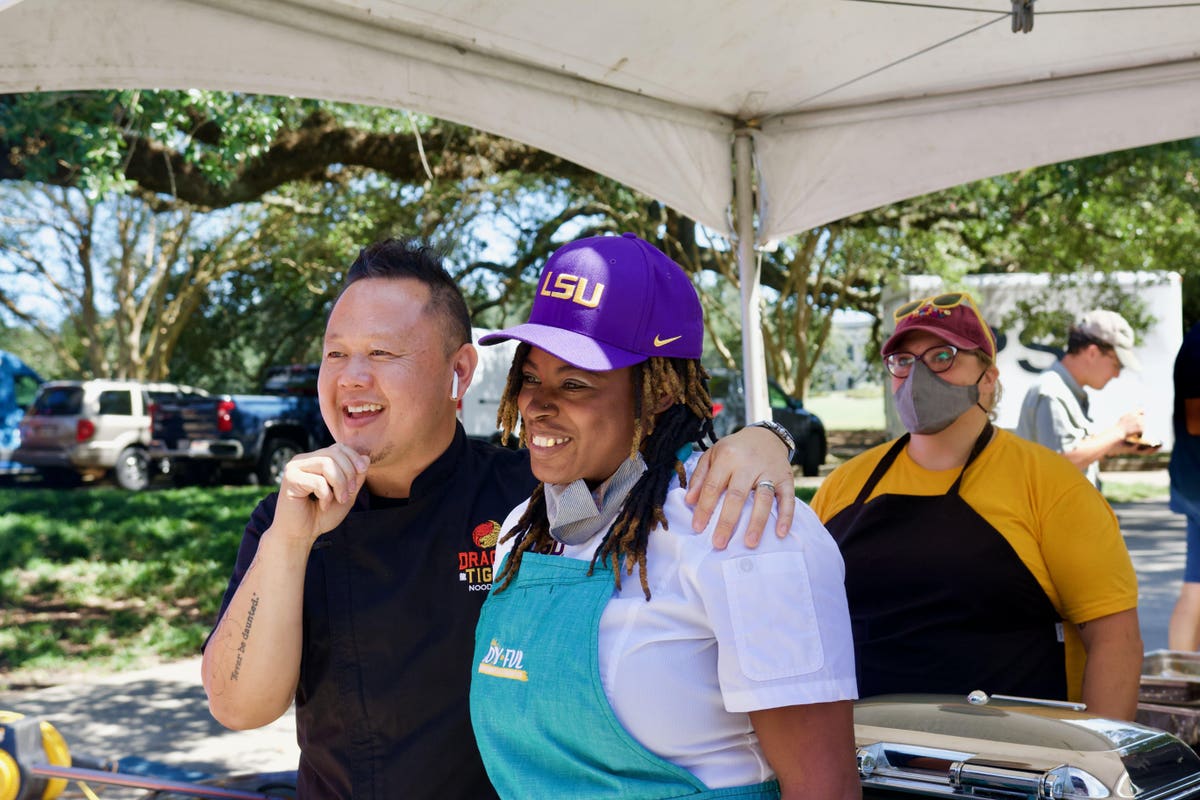 When Food Network chef Jet Tila was in his twenties, he paid the bills by working in college foodservice. Specifically, he worked for Compass Group, the parent company of Chartwells, which provides dining services at schools across the country.

Tila was influential in his time there: “I actually wrote some of the first training for Compass Group in the 2000s for tech companies and colleges.” He’s grateful to them for helping him launch his career, and on September 24, he chose to honor them by MCing for Festi-Ful, the nation’s largest college food festival, which Chartwells held at 300 college campuses simultaneously.

Festi-Ful was designed to let students experience some semblance of normalcy in a time that is anything but. Tila told me that Chartwells organized, “the largest campus food festival ever… Everyone knows someone who was affected by the pandemic obviously. I have young kids, but it seems to me that the people who were most affected by this were college kids.” Many students are finding that the lives they expected to be leading pre-pandemic are no longer possible, and even the sacred institution of making friends in the cafeteria is in jeopardy.

Chartwells’ CEO Lisa McEuen chimed in to say that while COVID-19 has presented the foodservice industry with great challenges, especially with regards to food insecurity, it has also, “given us opportunities to think of new ways to bring students enjoyable dining experiences, especially outside of the dining halls, while still being feasible for universities.” Chartwells has recently implemented ghost kitchens on many of their campuses to increase efficiency, and has also been experimenting with delivery and contactless pick-up to keep students fed in a time when dining halls are dangerous.

She also pointed out that Festi-Ful was held to help students experience some of the connection that’s been so difficult to find in this time of social distancing: “The idea of breaking bread together has always been something that’s very important to us and at the core of what we do. Food has an incredible power to not only nourish the mind, body and spirit, but to bring people together… Since that traditional college experience was largely lost last year, we wanted to make a point of celebrating its return this year.”

The schools embraced that spirit as well, and many combined their celebrations with charitable initiatives. Tila mentioned that at Eastern Michigan University they donated one dollar to a local food pantry for every attendee, Wingate University held a canned food drive, and Northwestern partnered with Chicago-area food banks. At Canisius College in Buffalo, NY, they offered free admission to the dining hall and asked for $3 donations, which would be given to the food pantry on campus to help fight food insecurity. Canisius’ president, John Hurley, was so impressed with students’ generosity that he decided to double the donations, totaling over $2,220 to the campus pantry.

Because these schools are spread out across the country and there were so many campuses celebrating simultaneously, Tila feels that the charitable initiatives are, “impactful. It’s not just about having a party. It really is a festival about happiness, it’s community-building. I don’t think it’s ever been done before. It’s huge, and only Chartwells could put together something like this.”

When asked directly about his experience MCing, he reaffirmed that sentiment, saying that from his vantage point at LSU, “The event was fantastic! Seeing the looks on students’ faces and how happy they were to be back together was phenomenal and truly rewarding for me. Then you add in some of the best jambalaya you’ve ever tasted from the Jambalaya Showdown, a few giant Jenga games, live music and so many other things I can’t even list, it was a truly memorable experience.”

It was also a full circle moment for the celebrity chef. “It’s almost like, we all come from family, right? I was with Compass in my twenties and I’m a 46-year-old man now, and it’s still, like with all loving families, it’s the love-hate guilt trip… I really owe a lot of my success to Compass… In a very loving way, you always end up at home.”

Hopefully, the students felt a little taste of that loving spirit too.