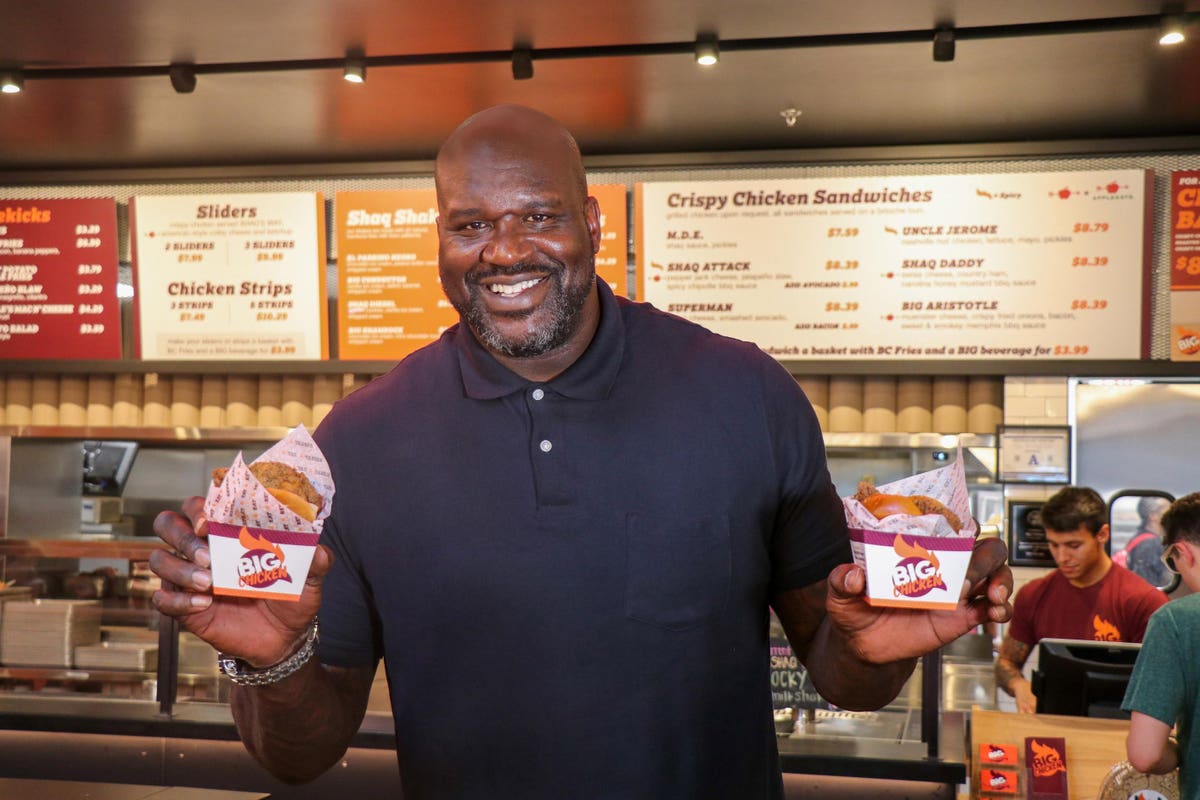 Shaquille O’Neal goes big on everything he does. It’s his modus operandi–from attacking the boards for a rebound to putting his stamp on an extra-large Shaq-a-Roni at Papa John’s.

He intends on doing the same for his chicken concept, aptly named Shaq’s Big Chicken. The brand was founded in 2018 from a reality TV show and currently has locations in Los Angeles, Los Vegas and on the Carnival Cruise Ship Mardi Gras.

Now, the chain is ramping up its growth through a new franchising program targeted toward mufti-unit operators. Most of this growth will come from traditional brick-and-mortar locations, however Big Chicken also plans to tap into the fast-growing ghost kitchen space to support its growth and anticipates opening 80 such locations inside Walmart
stores.

The concept is backed by three ownership entities–Shaq himself, who is no stranger to the restaurant space as a Papa John’s and Krispy Kreme franchisee; JRS Hospitality, which has a heavy presence on the Vegas strip; and Authentic Brands, which owns and licenses several major brands like Reebok, Sports Illustrated and Elvis Presley.

Though the restaurant space is still climbing out of the dust of 2020, Big Chicken CEO [and former Budweiser executive] Josh Halpern said now is the right time to push the gas on expansion.

“We are seeing the indicators in our current restaurants that now is a good time. We are seeing high tickets, our traffic has come back,” he said. “As soon as we put out our [franchise disclosure document], we received a lot of initial interest. Shaquille put something out on his LinkedIn page and things got pretty insane after that.”

The expansion plan is certainly diverse–from the Vegas strip to sports stadiums to even more Carnival Cruise ships to Walmart ghost kitchens. This approach has amplified interest, according to Halpern.

He adds that Big Chicken’s “differentiated” menu and concept has also generated significant attention from potential franchisees even though the brand’s happens to be positioned in an intensely crowded chicken category.

“This team has built a world-class menu. We have amazing milkshakes. We have a different value proposition with our chicken sandwiches. We have 5-ounce chicken sandwiches while most are in the 2-to-2 ½-ounce range. We’re also hormone- and antibiotic-free, our chicken is breaded and fried in store with proprietary breading and we have so many options compared to others,” Halpern said.

The Vegas menu, for example, features seven different chicken sandwiches, including the “Charles Barkley.” The sandwiches are named after people important to Shaq, Halpern says.

In fact, the basketball hall of famer has been involved in nearly every step of the concept’s business, from its branding down to the sourcing of the supply chain.

“He takes great pride in this because it’s part of his legacy. Everything is built to have ‘big fun,’ like his footprints on the ground at the drink station and a chair in each restaurant that is three times the average chair. That’s his chair,” Halpern said. “We are able to build an experience that doesn’t feel like a cheesy homage, but rather that we are leveraging Shaquille’s authenticity, which is one of the best things about him.”

Big Chicken’s menu and branding are complemented by a tech-forward approach. The company works with a marketing asset company to drive efficient social media prices and is looking at a credit card processing solution to shave down transaction fees, for example. It has already built its own app. Its loyalty program is ready to go live once the 10th brick and mortar location opens.

Also, just this week, Big Chicken announced its location at Climate Pledge Arena in Seattle now features Amazon’s
Just Walk Out technology and Amazon One, used at Amazon Go
locations. The technology allows guests to insert their credit card at the location’s entry gates to shop or hover their palm over an Amazon One device to enter, then take what they want and leave without having to checkout.

There’s also the Walmart partnership to illustrate Big Chicken’s tech focus. That expansion is facilitated through Ghost Kitchen Brands’ digital infrastructure and allows customers to pick up their food for delivery or pickup while shopping at the retail giant. Several chains, including Wendy’s and Wingstop
, have dipped their toes into the ghost kitchen space to expand their reach into new markets in a more cost-effective way than building or leasing physical restaurants.

This is Big Chicken’s objective as well, and the company expects to have up to 30 of its 80 Walmart locations open by the end of the year.

“These locations are to drive trial. We want to give the maximum number of people the opportunity to try us. It’s a massive value add for us to extend our presence here,” Halpern said. “The goal is to get people to try the food and then I’m confident we can get into their monthly consideration set and then grow. We’re an emerging chain and we need to make sure we enter their rotation. Then from there, the sky’s the limit.”