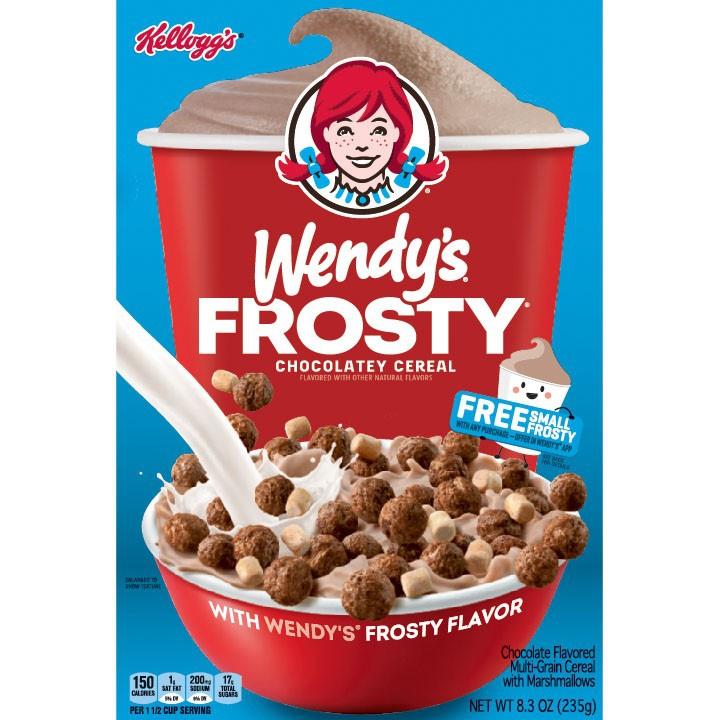 Wendy’s is teaming up with Kellogg’s to bring its signature Frosty to the cereal aisle. The companies announced this limited-edition Kellogg’s Wendy’s Frosty Chocolatey Cereal will hit grocery shelves in December.

The product includes chocolate-flavored marshmallow pieces and cocoa-coated round cereal bites and will be sold at the suggested retail price of $3.99 for an 8.3 oz. box, or $5.69 for a 13.2 oz box.

A request for an interview to learn more information was turned down, but we do know this–the cereal launch comes on the heels of two other consumer packaged goods experiments from Wendy’s and Kellogg’s. In 2020, the two companies launched limited-edition Baconator Pringles.

They must have liked the response, as they collaborated again in the spring to launch Spicy Chicken Pringles.

Restaurant chains extending into the grocery aisle is certainly nothing new (frozen White Castle Sliders, anyone?), but it is a growing channel because of the opportunity to grow both revenues and brand awareness.

How much revenue? Consider Focus Brands, for example. That company’s retail sales include more than 100 CPG products across its seven brands, like Cinnabon and Auntie Anne’s. The company generates more than $1.9 billion from the channel.

And how much awareness? Consumers shifted most of their food spending to groceries in 2020 as dine-in shut down across the country. When restrictions started to ease earlier this summer, that spending began to shift back to restaurants. But the restaurant industry isn’t yet out of the woods as vaccination mandates, the delta variant, labor and supply chain issues hinder full recovery. Perhaps because of those factors, grocery retailers are expected to maintain an edge in food spending in a post-pandemic environment, according to the Food Industry Association.

In an interview earlier this year, Wendy’s CMO Carl Loredo said the chain is striving to meet consumers where they are and it seems they’re at the grocery store more often these days.

Further, Wendy’s two biggest rivals–Burger King and McDonald’s–have much bigger brick-and-mortar footprints in the U.S. But having a presence on shelves at retail giants like Kroger and Walmart extends Wendy’s brand reach well beyond its nearly 6,000 physical restaurants, which could give it a bit of an advantage in the competitive burger category.

Extending reach and growing revenue are certainly benefits for Wendy’s, but CPG experimentation also provides an opportunity to ideate and innovate. The chicken sandwich wars, for example, dominated restaurant headlines for the past year and a half, but Wendy’s was the only company to leverage that narrative with a complementary Pringles launch. Surely, I wasn’t the only one intrigued by the sheer novelty of the idea to buy a can.

Another benefit for Wendy’s is the potential to tap into new digital customers, who tend to spend more and exhibit more loyalty. The chain is offering a free small Frosty or Frosty-ccino via its app with each box of cereal purchase. In June, Wendy’s app downloads increased by a whopping 136%. If there is enough consumer interest in the Frosty Chocolatey Cereal, that momentum may very well continue.