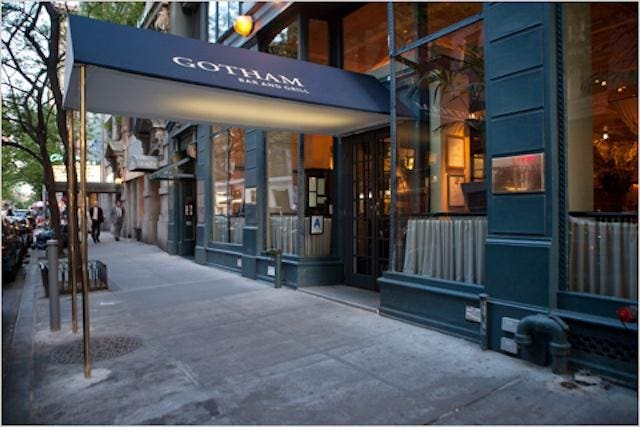 When one of New York City’s most beloved restaurants shuttered its doors during the throes of the pandemic in March 2020, the closure appeared to be permanent.

But the iconic Gotham (formerly Gotham Bar and Grill) is poised for a comeback later this year. Managing partner Bret Csencsitz announced plans for the eatery’s return and reinvention, tentatively scheduled for November 2021, on the Gotham website. As part of this transformation, even the restaurant name has been rebranded.

He notes that Gotham’s “road to return” is a “testament to the city from which it took its name, a fictitious city full of grit and determination.”

Shocking although not completely unexpected

Blending good food, gracious service, and a magnificent setting, Gotham was an uber-popular meeting place for its well-heeled local clientele. Designer David Rockwell called it the “living room for New York.” Tourists and families celebrating holidays and milestone celebrations regularly made pilgrimages to the 12 East 12th Street institution, coming from every corner of the city and the world.

Although the shutdown seemed sudden and unexpected, it also made sense given the timing. Celebrity chef Alfred Portale, who had helmed Gotham’s kitchen for more than three decades, earning numerous accolades for his inventive New American cuisine, had decided to step down and leave in 2019. (Soon after, he opened Portale, his namesake contemporary Italian restaurant in Chelsea.)

Given the uncertain future of fine dining in New York City, in general, the owners of Gotham—a restaurant that had been a fixture in Greenwich Village for some 36 years—reluctantly concluded that they couldn’t afford to lose revenue for an indefinite length of time. They felt that the business world couldn’t withstand the pandemic, says Csencisitz.

Managing partner Bret Csencsitz’s own successful history in the industry also came to an abrupt end. Raising in the hospitality ranks from a bar manager, he went on to manage banquets at the Michelin-starred Restaurant Daniel and then was named Maitre d’ at Cafe Boulud. Joining the team at Gotham in 2007, he oversaw a team of 100 employees that functioned as seamlessly as a philharmonic orchestra.

For Csencsitz and others working at Gotham, it was like the ground had suddenly shifted. “My wife and I couldn’t come up with a Plan B that felt right,” says Cscencsitz. “We had built a life in New York around our kids’ lives, around our creative community, and around Gotham,” he says.

In anticipation of its November opening, Forbes.com caught up with Csencsitz to find out about the plans he and his partners have for reinventing Gotham:

Gotham’s former pastry chef, Ron Paprocki, an integral member of the team since 2012, will be taking over the kitchen. Do you have a sense of what the new menu will look like?

Bret Csencsitz: While a couple of items will pay homage to the signature dishes for which Gotham is known, Chef Paprocki has created a menu all his own. Our guests will recognize the spirit of Gotham in clean, complex, flavorful dishes that are also crafted sustainably.

In that vein, our new sourcing director is working with the chef to find the highest-quality ingredients offering flavor and nutritional benefits—while ensuring best practices in animal husbandry, and the sourcing of sustainable agricultural and seafood products.

Gotham has been known for its stunning interior decor and design that many have compared to a movie set. What changes do you expect to make to the setting?

BC: It was our intention to strike an ideal balance, preserving the familiar in ways that will allow former patrons to revisit their memories while offering something new to appreciate for those who do and don’t know the original space.

We want guests to feel that they are somewhere special, modern yet timeless, as we have always been. We’re keeping the bones but celebrating the power of design with some exciting changes.

Thirty-six years ago, James Biber, a recent Cornell University architecture graduate, led the design of Gotham under Paul Segal’s architecture firm. This time, Jim has led the redesign under the umbrella of his own company, Biber Architects. He has infused the update with as much intimate knowledge and affection as anyone could bring.

The Gotham Gallery, at the far end of the bar area, will feature 5-6 limited edition prints whose sales will benefit rotating nonprofits, the first of these nonprofits, GROWNYC, on whose board Bretserves. In the dining room, a vibrant exhibit of contemporary art will be curated by Emily Santangelo. This rotating exhibit will be ever-changing like NYC.

The front area of the bar will be reimagined as a place that invites guests to relax and reflect in a mini neighborhood lounge and library with couches and lounge chairs. Building on my lifelong love of books and literature, I’ve asked Nancy Bass and The Strand Bookstore to curate this area with recommended books about art, food, cooking, current events, and more. We want to encourage guests to come often and stay awhile in this inviting new space and the welcoming atmosphere throughout.

It is a challenging time to open or reopen a business. Do you anticipate being able to recruit and keep restaurant professionals?

BC: We are experiencing some challenges, like others. But to some degree, I feel that we are more fortunate. We are attracting both people who want to come back and others who want to join us for the first time, not only because of excitement around our reopening but because we are making known how dedicated we are to shaping an empowering work environment.

We are working hard to create a company where employees feel valued, thrive, and have a stake in our success. After all we’ve been through, it’s exciting to still see many people who truly love restaurant work and are raring to do what restaurant people do, put on a show!

BC: Thanks for asking this. It’s crazy to think about emotions these days but isn’t that what life is made of? From the moment we were closing Gotham, I was working to reopen it. So I have had two trains running simultaneously since March 2020: Wind it down and Open it back up.

I was home with my family and/or commuting between New York and the Minneapolis area, where my in-laws live. They graciously opened their home to us. Like most people, my days were fraught with uncertainty and fueled by need. We were able to keep afloat through our community endeavors, the artisan line of Gotham Chocolates created by Chef Paprocki and me, and the Oregon Pinot Noir we make.

That said, the time has been helpful in allowing us to measure our decisions and be as intentional as possible, as we shape our next chapter.

Conscious of how lucky we were, we embraced the adventure of our time away and after six months returned to New York with a reasonable amount of hope. In the year since we’ve been ticking off benchmarks to reach the moment now at hand.

Countless friends have come out of the woodwork to offer investment, labor, and advice, as well as many who simply responded to my phone calls, offering strength and support on this odyssey,” he wrote. “When the doors reopen this fall, we will have many, many people to thank. They know who they are, and they are now part of our DNA.