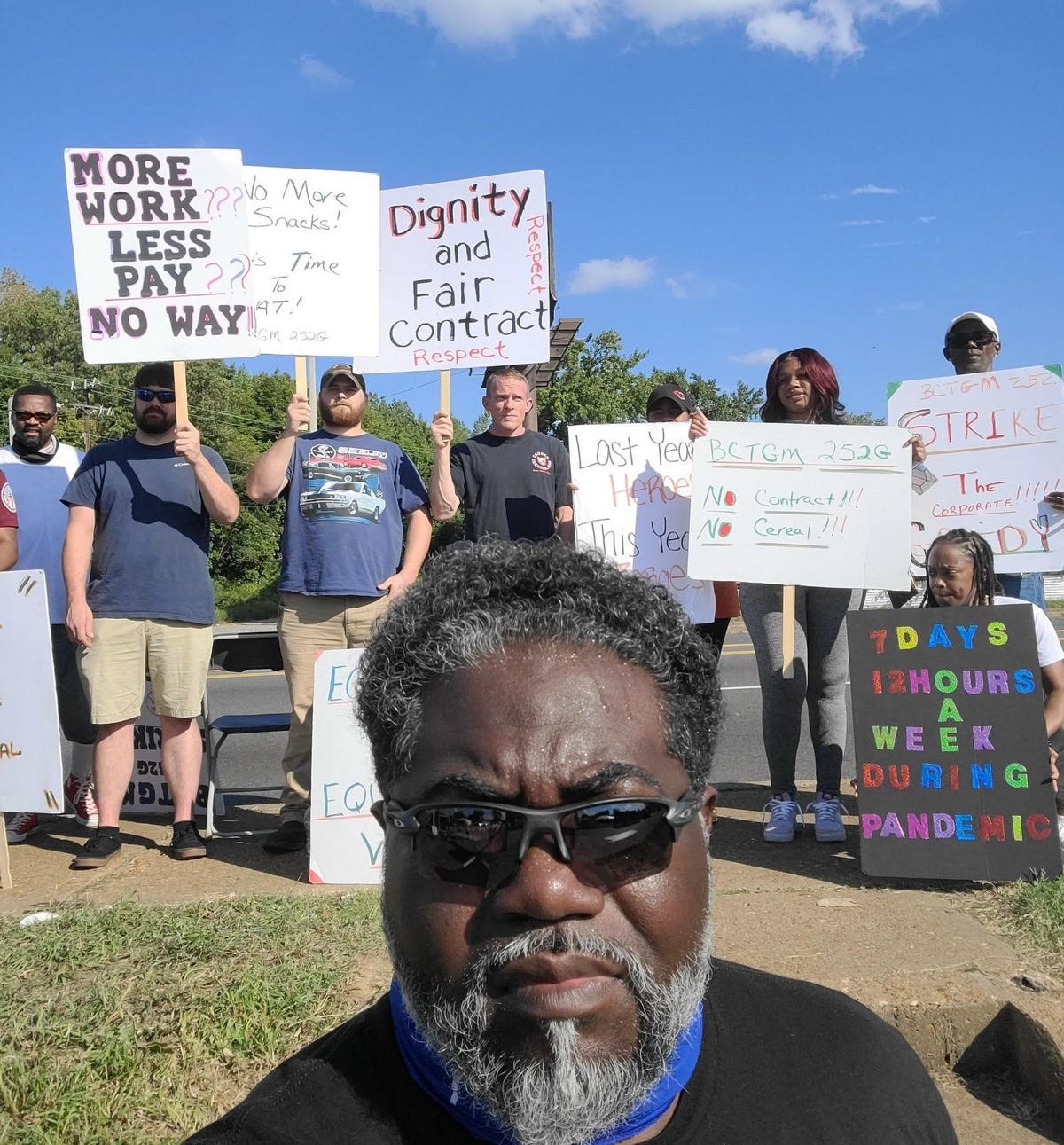 Note: This interview has been edited for length and clarity.

Errol Schweizer: What is your role at Kellogg’s?

Kevin Bradshaw: As an employee, I work in the warehouse, making the product and shipping it all over the world. I’ve been doing it for about twenty years. I’m the vice president of the local here.

Dan Osborn: My job at Local 50G is I’m president. Normally my role is the business end of the local union. Recently it’s been to organize the strike that’s going on right now, as well as talk to the media and get our message out. At Kellogg’s, I’m a mechanic. I’ve been a mechanic for eighteen years. My attendance rate is 99% as a dedicated employee.

Errol: What are the issues here?

We went into an impasse last year, about benefits and wages and insurance that were supposedly unsustainable for the company. And we pushed back because we wanted to work with the company in good faith. But the things that they’re asking for are just outrageous. I mean, they’re ridiculous. Taking someone’s pay and cutting it by $13 an hour. There’s no way to actually ever maximize pay, no way to retire with insurance or health care or pension plans. And to just work every day, seven days a week, twelve, sixteen hours a day, and never have anything to show for it at the end of your career.

Dan: Our CEO, from 2020 to 2021, has taken a twenty percent increase in his compensation, as well as the top executives, they’ve been taking increases. So this contract that expired on October 4th, we are currently on a two tier wage system. Thirty percent of employees are on a lower tier making eleven, twelve dollars an hour less, higher insurance premium, less vacation, lower vacation pay. So we’re all about the equalization of wages, we want to bring those thirty percent up to the higher tier level of workers. The company’s proposal was to eliminate that thirty percent cap and eventually get everybody on that lower tier while the company is making record profits.

Errol: How has the Covid-19 pandemic impacted working conditions?

Dan: 2020 is actually when this contract expired the first time. We worked under an extension of that same contract for a year up until October 2021. In 2019, Kellogg’s Omaha did not hire any employees. They then shortened our numbers. In my business, we run a twenty four hour cycle, seven days a week, 365 days. There’s a couple days where we shut down to fumigate for bugs, things like that. But normally we’re running full production all the time. So when you do not have enough employees, that has to be covered by employees who are at work in the form of forced overtime. That’s twelve hours a day. I work a 7:00 to 3:00 shift. So they come up to me at 2:59 and tell me I got to work till 7:00 P.M. Then come up to me at 6:59 and tell me I got to be back in at 3:00 A.M. to cover vacancies. And so everybody in the plant was already working a lot of overtime and then the pandemic hit. And at one point, we had close to one hundred people out either with COVID-19 or from COVID-19 protocols. And so that only increased the overtime that we were working and we did not shut the plant down. We continued providing cereal to the nation. And we did so tirelessly. We worked and worked and worked and Kellogg’s continued to make record profits through the pandemic. So you know, we are not asking for wage increases. We’re not asking for better benefits.

Kevin: What we’re standing for is for Kellogg’s to continue to be fair to employees because of the work we do and the money that we make them. And we just want to keep things the way they are, to be able to pay people what they deserve the paid. Because what they’re asking for is just ludicrous. We just want to be able to protect the future worker. “Well, if you guys accept this, they won’t have anything to do with you, but everybody coming behind you, now you no longer have healthcare benefits. But you still can come work here for 13 dollars an hour less than what we make.” So why would people want to be in a union that sold them out for something as crazy as this? So we’re fighting for the working class, we’re fighting for families, we’re fighting for loved ones, we’re fighting for America. Your fight is our fight.

Dan: They said they are prepared to move these production facilities down to Mexico. The main thing that would cost Kellogg’s money is equalization of wages within our ranks. Kellogg’s came out in the media and stated that our proposals would cost the company $60 million. In 2020, during the negotiations, before we started the extension, there was a Kellogg’s executive who stated in negotiations that he’s willing to spend $10 million a day to keep us out on the street. And to get rid of our union essentially. Well, if he’s willing to spend $10 million a day, I’m not a mathematician, but that’s six days out on the street.

And that that doesn’t make any sense to me. That’s who we’re dealing with right now. And it’s frustrating at a time, where it’s hard to find employees, at a time where they’re making profits. It doesn’t make any sense and I can’t wrap my head around the timing. I keep coming back to the same thing and its corporate greed. I know that’s a slogan that gets thrown around a lot. But this is what it is.

Errol: So should folks skip the Frosted Flakes?

Kevin: Oh, yeah. I mean, they got to go. Leave the cereal in the store. We make the lowest cost of cereal in the United States right here in Memphis, Tennessee, along with my three other sister plants in Omaha, Nebraska, Lancaster, Pennsylvania and Battle Creek, Michigan. They talked about the $120,000 that we made a year but they didn’t tell anyone that comes from mandatory daily overtime, fifteen hours a day, seven days a week non-stop. So we’re fighting for our families, and we’re here to stay. One day longer, one day stronger, and they’re threatening to bring scabs to replace us. We know during a lockout from 2013 they spent over almost $50 million in ten months to try to save $8 million with scabs. And we had scabs working in the plant that actually got tried and convicted and are in jail right now for urinating on the cereal belts. No one wants to eat “rice pispies”. You know what I mean? We want to eat Rice Krispies.

Errol: How can folks support you?

Kevin: You can support us by going to the Union page and you’ll get all the links that you need. I just want to say we appreciate all the support in Memphis, from the religious community, the Memphis Police Department, the Fire Department. We have people on the line right now like Dr. Earl Fisher, who’s a pastor here in the city of Memphis. We have a lot of support from a lot of different organizations.

Dan: Go online and do a quick Google search and figure out what brands Kellogg’s has. I mean they’re a giant corporation and do your part and boycott it. Kellogg’s isn’t the only game in town. When you’re at the store all you have to do is make a conscious decision to put that box of Apple Jacks back and grab one of the others.

The second item would be to go to our website and donate through PayPal
, 5 bucks, 10 bucks. We have people battling cancer out on these picket lines right now. We have people whose families we have autistic children that need medical attention. So that that that would definitely help ease some of our struggles that we’re dealing with.