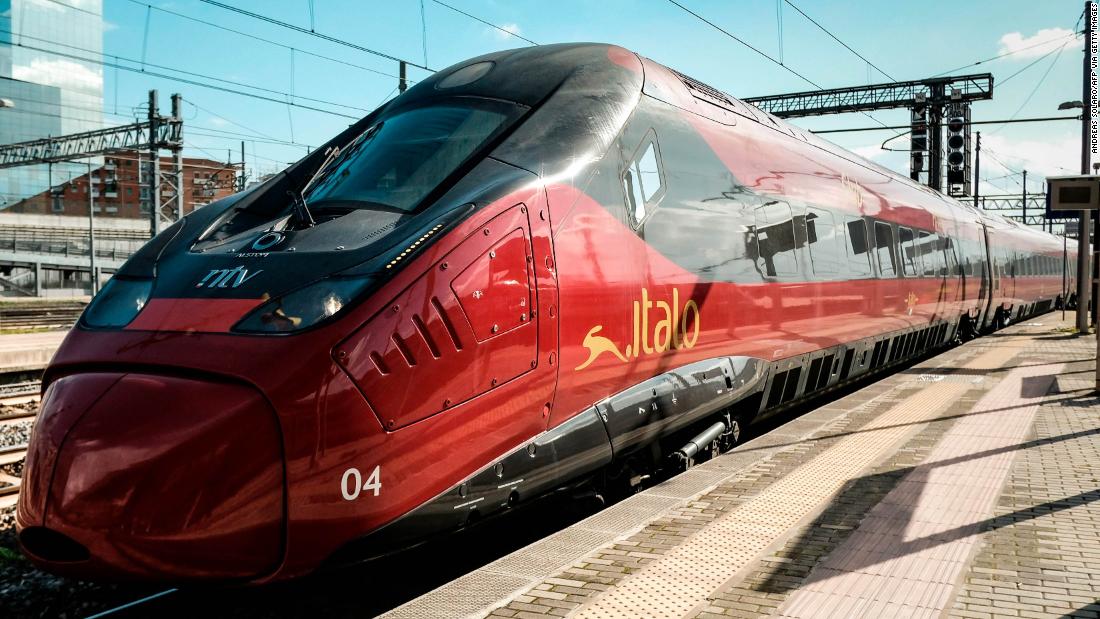 (CNN) — Over a decade ago, when Francesco Galietti had to take the train from his native Rome to Milan for work, he used to fly the nearly 400-mile route. Today, he takes the train.

Galietti — CEO of Rome-based political risk consultancy Policy Sonar — is not alone. Figures released in 2019 by Italy state railway company Ferrovie dello Stato show that the number of passengers taking the train on the country’s main business route, between Rome and Milan, has almost quadrupled in a decade, from 1 million in 2008 to 3.6 million by 2018.

Over two thirds of people traveling between the two cities now takes the train. It’s a remarkable endorsement of Italy’s high-speed rail network, which debuted in 2008.

Traveling those near-400 miles between Milan and Rome takes as little as 2 hours and 59 minutes. And, of course, the train stations are in the city center, and there’s no need to turn up long before your train — the doors close two minutes before departure.

Contrast that to a minimum half-hour drive to Rome’s Fiumicino, checking in 90 minutes before departure, an hour in the air and then landing outside Milan — Linate airport, the closest, is about 20 minutes’ drive into town — and it’s obvious why people are opting for the train.

Which leads you to wonder, as Italy’s national airline prepares to shut down on October 15 — did the high-speed railways kill Alitalia?

“Alitalia was a bird with its wings very much clipped from the start — for an international carrier, it was very much focused on the domestic market,” he says.

Italy’s high-speed stations, like Porta Susa in Turin, are destinations in themselves.

Of course, in one way that makes sense — Italians mostly vacation in Italy, and visitors want to tick off sights the length and breadth of the country. Flying into Milan, and then onwards to Naples or Rome, is a natural step for people coming from countries such as the US, where air travel is common.

But, says Galietti, that domestic focus meant that Alitalia was susceptible to competition when the low-cost flight revolution started — and then from the high-speed trains.

“It was a nasty cocktail,” he says. “On that [domestic] market they had massive competition from low-cost airlines and trains. Myself, if I have to go to Milan, Turin or Venice, I take the train, like many others. The Frecciarossa (one of the high-speed trains) goes from city center to city center, you don’t land 20 miles outside the suburbs — it’s a terrible competition [for Alitalia].”

Tourists feel the same way. Cristina Taylor, a frequent visitor to Italy from the UK, says she finds taking the train “easier.”

“You leave and arrive from city centers, there’s no airport check-in or transits between airports to the cities. Also they’ve gotten better over the years in terms of accommodating international passengers in the sense that there are proper places to put your suitcases.

“I do think it’s good value — you save time and money.”

Trenitalia’s Frecce trains blast through the countryside at 224mph.

Today’s high-speed system is a far cry from the railway network of Italy’s past, in which trains were slow, outdated and usually late.

There are even two high-speed companies to choose from. Trenitalia, the state operator, has its Frecce (“Arrows”) trains, the Frecciarossa, Frecciabianca and Frecciargento (Red, White and Silver Arrows), each covering a section of Italy, roughly in a T shape along the northern part of the country, and then straight down the Italian peninsula. The fastest Frecciarossa trains can run at 360kmph (224mph).

Meanwhile, Nuovo Trasporto Viaggiatori, a private company, launched its Italo trains in 2012, covering 54 cities a day. Italy is the only country in the world to have two high-speed train operators. It’s also home to the world’s first high-speed freight service, running between Bologna and Maddaloni, in Campania, in just three and a half hours.

Prices are relatively modest, since rail travel is subsidized — Galietti calls the fares “not much” compared to France, Germany and Switzerland. And onboard, the experience is not unlike that of an airline. Every passenger must have a reserved seat to board — nobody is allowed to just hop on and hope to find a spot. Passengers can pick their seat when buying a ticket, and can accrue points that win them status. Both Trenitalia and Italo have lounges at their main stations for top-tier travelers.

Italy’s rise in high-speed train passengers has coincided with a decline in domestic flights.

Carlo Barbante is one of them. The director of the Institute of Polar Sciences at Venice’s Ca’ Foscari university, he travels regularly to Rome, and takes the Frecciarossa train.

“It’s more convenient for everything,” he says. “I like the carbon footprint first and foremost, but I like that I can check in a few minutes before departure, can walk around easily, and feel very safe and comfortable.”

As a climate scientist, Barbante has always taken the train — “If we’re trying to convince people to reduce their carbon footprint in any way, we have to give the example — be in the first row showing that we’re using public transport,” he says. “I feel it as a duty — the train is one of the most reliable ways to reduce your carbon footprint.”

Before the high-speed revolution, however, Italian trains were too slow to make Venice to Rome (about 330 miles) a viable day trip. Instead, he used to take the night trains.

Until a couple of years ago, he says, there was a super-fast train that just stopped at Venice, Padova and Rome, which took just over three hours. Today, with extra stops at Ferrara, Bologna and Florence, it’s just under four. But that’s still faster door to door than it would be to fly.

Barbante has just come back from a trip to Geneva from Venice, all by train. “It was very comfortable — there was no reason to take a flight. You have all the time to work and relax,” he says.

“I think the high-speed trains are taking a good part of the domestic flight market. They’re faster and more comfortable.”

The stats bear him out.

Trenitalia commissioned a report in 2019 to look at how things had changed in the first decade of high-speed trains. It showed that the number of trains on the lines had doubled, and that passenger numbers on its high-speed trains had rocketed from 6.5 million in 2008 to 40 million in 2018 — and that’s not including those who use Italo.

In a world first, Italo trains are the privately owned rivals to the state-owned Frecce trains.

There were clear knock-on effects, too. While real estate prices in Milan dipped 20.5% from 2008 to 2018, prices for offices around the high-speed stations of Rogoredo and Porta Garibaldi were up around 10%.

The number of tourists using the trains had rocketed from 1.8 million in 2008 to 7.3 million in 2018. Rome to Florence and Venice are the most popular tourist routes — the latter would, in the old days, have been a prime flight route.

In fact, the link between Italy’s trains and planes was made pretty clear in 2019, when a merger was mooted between the fast-sinking Alitalia and Trenitalia.

Former Ferrovie dello Stato Mauro Moretti had a real vision for a possible merger, says Galietti. It was: “Why would you cannibalize each other if we can integrate transport? He had a grand vision of some stretches on planes, some with trains and the final miles with buses. We owe the Frecciarossa revolution to him, and it sounded like a very enlightened proposal.”

However, without Moretti, Galietti calls the idea “fishy” and suggests that the fact that train travel is subsidized in Italy could have been a way for Alitalia to rescue itself, had it merged with Ferrovie dello Stato. It would, by that point, he says, have been “no longer visionary but opprtunistic.”

Ultimately, Alitalia wasn’t opportunistic enough. “They had surprisingly few flights abroad and were not the masters of their own turf — others were,” says Galietti, who also says their cost structure allowed them to “bleed out.”

And as Alitalia flights take off for the last time on October 14, two of the new masters of its former turf — the Frecce and Italo trains — are going from strength to strength.

Thanksgiving Turkey Shortage, Prices Up 20% With Avian Flu, Inflation
F1 Star Fernando Alonso Lives the Sunreef Eco Life
The Other Black Friday: Do Your Part To Put Hunger Relief In The Black
How Two Oakland Women Are Rethinking Champagne With A Sparkling Wine Subscription
Giving Thanks For Rivers Of Food