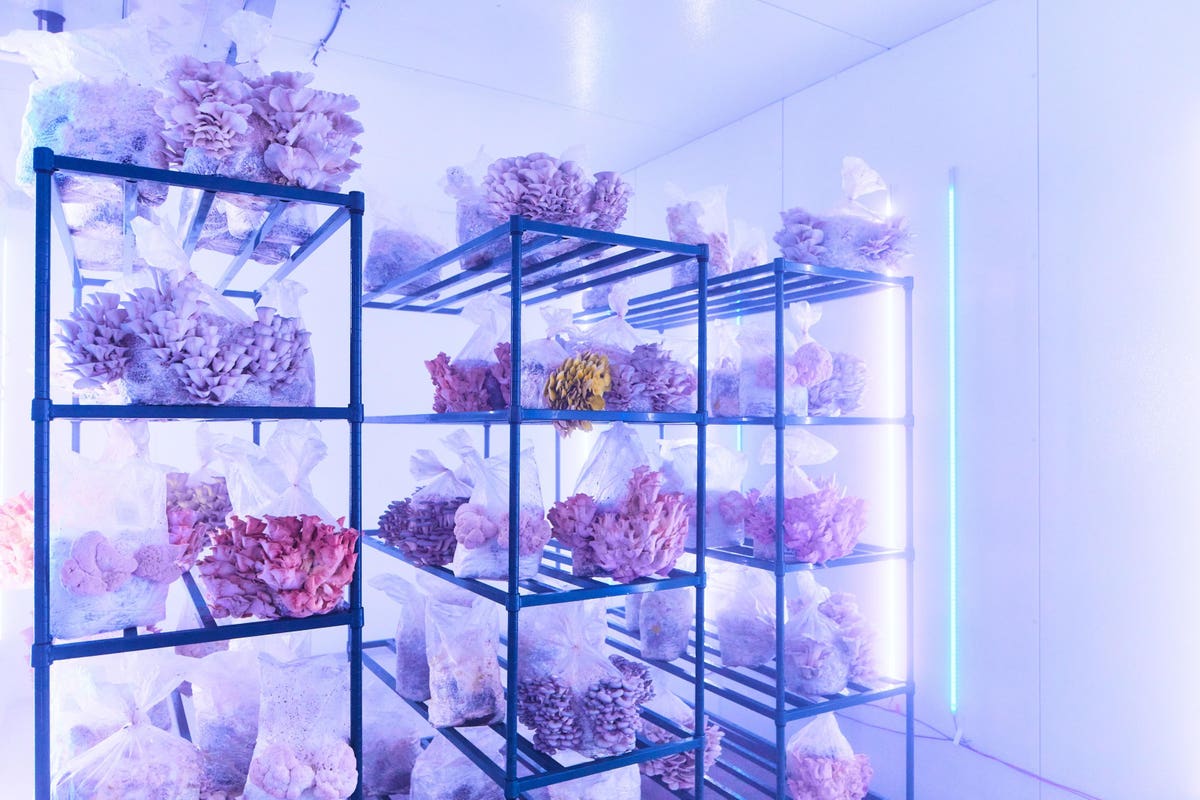 Inside the Texan warehouse farms of Smallhold, fungi like jumbo royal trumpets, blue oysters and almost-furry lion’s mane mushrooms pop out from blocks of sawdust. These mushrooms are inside ultraviolet-tinted incubation tanks that are humidity and temperature controlled. In a few days, the mushrooms are harvested and packed up for local restaurants and grocery stores.

Retailers like Whole Foods and Texas’s H-E-B have been pushing Brooklyn-based Smallhold to expand production, as sales of speciality mushrooms at grocery stores across America grew about 20% in the past year, according to the Mushroom Council. Smallhold’s mushrooms, now sold in 250 locations across 10 states along with Amazon Fresh and Misfits Market, are particularly in demand because they’re organic and provide customers with specialty varieties rarely sold.

“The plan is to build these farms all over the place,” says Carter, whose team has grown from 13 employees to more than 70. “It’s a farmers market quality product at an affordable price point. A lot of retailers don’t have access to the mushrooms we grow.”

To keep growing its network of technically managed mushroom farms, Smallhold has raised a $25 million series A, led by Astanor Ventures, a European investing firm started in 2017, alongside Energy Impact Partners and Wheatsheaf Group and other existing investors including David Barber’s fund Almanac Insight.

“These guys are ahead of the gun. They are experts in the crop,” says Barber, who also recently joined Astanor as a partner to accelerate financing change in the food system. “The situation is getting pretty dire and capital is not playing enough of a role. Where it is playing a role, I don’t think it’s playing the right role. We are leveraging the strongest parts of deploying dollars into a future food system, but with a team of people who can do that faster.”

Investors are betting that consumer trends in favor of supporting local supply chains, climate-friendly meatless eating, and upcycling from industrial waste streams will all converge in the mushroom industry and, specifically, startups like Smallhold. Mushroom funding is a fraction of the billions that alternative protein startups have pulled in from investors in recent years. According to Pitchbook, investment into fungi-related startups hit a record $100 million in total funding in 2020, and is on track to top it for 2021.

The market is wide open: U.S. farms, mainly in Pennsylvania, produce 1.2 billion pounds of mushrooms every year, and the vast majority are white button mushrooms.

Smallhold’s series A will bring its operations to the West Coast. Since January, Smallhold has increased production by more than 500%. The startup has streamlined the build time for its warehouse farms so that it now takes just six months to get a facility up and running. There’s now three: one in Brooklyn and two in Texas. A fourth in Los Angeles will open next year.

Founded in 2017 by Andrew Carter and Adam DeMartino, Smallhold started out as a storage container in Brooklyn. The friends from the University of Vermont soon pivoted to selling an entire growing system using patented technology that could plug-in at restaurants and grocery stores like the Whole Foods in Williamsburg. Amid the pandemic and skyrocketing demand, Smallhold figured out how to open larger farms in warehouses to fulfill bigger grocery chain orders.

Minifarms for grocers or restaurants are now a smaller part of Smallhold’s business. Central Market in Texas still went all-in, and three stores owned by the chain now have their own proprietary Smallhold minifarms installed so shoppers can watch mushrooms grow while picking produce.

After losing most of their restaurant customers in March 2020, Smallhold is back to being prominently featured on some of the most highly coveted menus in America, from Eleven Madison Park, Maison Yaki and Olmsted in New York City to Uchi in Austin.

That list will grow as Smallhold prepares for a big California launch in 2022. Texas and California are still importing from Pennsylvania and overseas, Carter adds.

“The more mushrooms people eat, the less other things people eat,” says Carter. “Building farms as fast as possible and getting our mushrooms out there as much as possible, that’s the most important thing.”