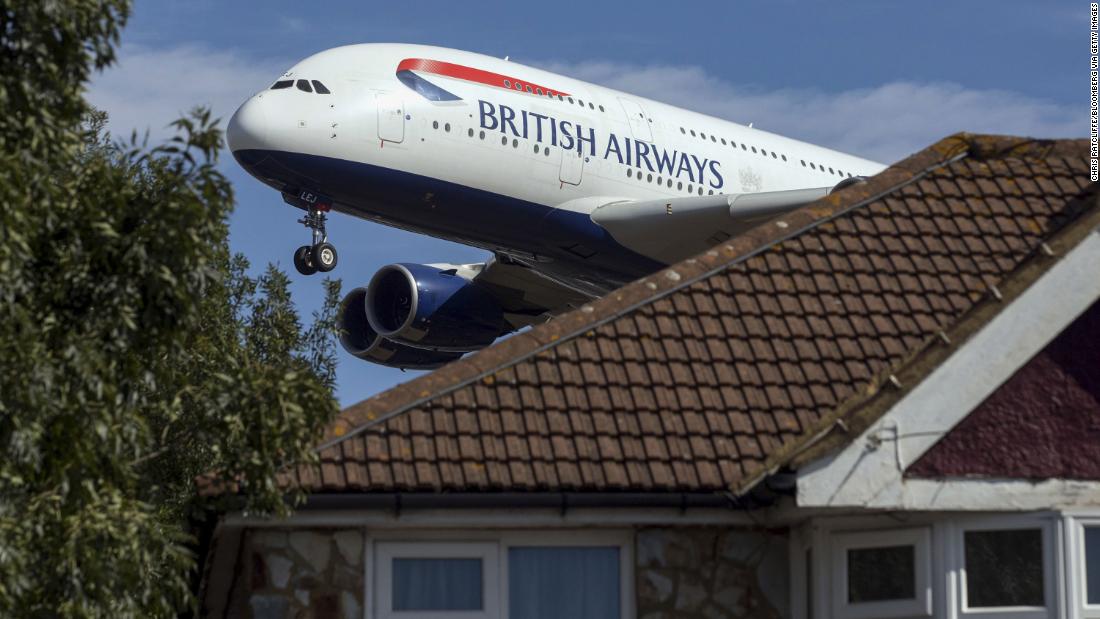 (CNN) — When Airbus announced plans to cease production of its A380 aircraft back in 2019, heartbroken aviation fans found solace in the fact that the superjumbo wasn’t set to stop flying anytime soon.

Production on this much-loved aircraft was due to continue for another couple years, and plenty of airlines had active A380s in their fleet.

But fast forward a year, and the A380’s hefty size and steep operational costs had no place in the pandemic’s minimal, cost-efficient international flight schedules.

Thanks to Covid-19, most of the world’s A380 fleet were grounded.

Lufthansa’s decision to park its A380 turned into the German carrier permanently retiring the superjumbos. The last A380 emblazoned with Air France livery took its final flight. It was increasingly unclear whether the A380 would survive the shutdown.

But while the A380s days are undoubtedly numbered, some airlines have announced plans to get the aircraft back in the air. Singapore Airlines will be reinstating the A380 on November 2021 flights to London, the same month British Airways will be flying superjumbos from the UK to Europe.

If you’re still hoping to experience the A380’s memorably spacious interior and quiet inflight experience before the plane’s a thing of the past, here’s our round-up of airline A380 routes to check out.

Singapore Airlines has 12 A380s in its fleet.

The A380’s first ever commercial voyage back in 2007 was via Singapore Airlines, traveling from Singapore to Sydney.

Pre-pandemic, Singapore Airlines had 17 A380s. They were all grounded when Covid-19 hit, and in November 2020 the airline announced plans to cut its superjumbo fleet down to 12.

Now Singapore Airlines has revealed plans to return some of its A380s to the skies.

Govindasamy said Singapore Airlines’ recognizes the A380s enduring appeal for passengers, and that’s partly why the airline’s returning the aircraft to rotation.

“The A380 is a wonderful aircraft,” he said. “Some people just book the A380 specifically to fly on it.”

Govindasamy added that it makes economic sense to return the A380 to the London to Singapore path, as the aircraft’s seat density lends itself well to routes where airport slots are limited.

The decision is also part of Singapore Airlines’ “premium positioning,” as Govindasamy puts it.

“From a brand perspective, the A380 really ticks a lot of boxes for us operating it,” he said.

As for reinstating the A380 for destinations beyond London, Govindasamy said Singapore Airlines is currently considering other routes that could be well served by the superjumbo.

“We’ll continue to monitor this very closely over the next couple of weeks and months before making that decision,” he said, adding that returning the A380 to its original Singapore to Sydney route is something the airline “will not say no to.”

Nine of Singapore Airlines’ A380s have undergone a refit and three are in the makeover process. Travelers splashing out on first class on the reinstated London to Singapore route will be able to enjoy the airline’s swanky suites.

Choice route: London to Singapore — be one of the first to experience the return of Singapore Airlines’ A380s

British Airways’ A380s are returning to the skies this year.

After months of transatlantic travel restrictions, the US/UK travel corridor is set to reopen in November and BA is upping its flight schedule accordingly.

Travelers will be able to enjoy the aircraft’s comfortable interior en route to Los Angeles and Miami this winter, as well as cruising from London to Dubai come December.

But before the superjumbos ferry British travelers on long-awaited jaunts to the US, they’ll first hop across the English Channel on some short-haul flights “to allow for crew familiarization,” according to a BA statement.

It’s not every day you travel from London to Europe on a double-decker plane, so avgeeks will be desperately trying to secure seats on these one-off flights.

Trying to book on these routes is guesswork for now, as BA has yet to confirm which short-haul flights will be operating the A380.

Choice route: London to Los Angeles — the perfect winter break, and what a way to return to transatlantic travel

Emirates is the largest operator of A380s.

The largest operator of the A380 is Emirates. When Emirates’ latest superjumbo joins its fleet later this year, the Dubai-based airline will be home to 118 A380s.

The airline announced in September 2021 plans to deploy the A380 to 27 cities by the end of November 2021. Travelers will be able to travel on board Emirates’ A380 to destinations including Amsterdam, Sao Paulo and Zurich.

On board Emirates’ A380s are swanky lounges and private suites, and premium travelers can even shower on board thanks to the A380 Shower Spa.

The route to keep tabs on is Dubai to Auckland — the Airbus A380’s size and comfort makes it ideal for long-haul journeys, and pre-pandemic, Dubai to Auckland was the longest Airbus A380 non-stop route. Emirates’ aircraft cover 14,193 kilometers over the course of this 10-hour journey.

Choice route: Dubai to Istanbul — a first for the A380 and an opportunity to get back on a superjumbo this year.

Qatar Airways is set to reinstate the superjumbo in its schedule this winter.

This statement left many worried for the superjumbo’s future at Qatar Airways, but as international travel increases, the landscape seems to be changing.

According to the airline’s online schedule, Qatar Airways has plans to operate A380s between Doha and London Heathrow, and Doha and Paris Charles de Gaulle, from December 2021.

A Qatar Airways spokesperson declined to comment on the A380’s return to service and the airline’s future plans for the aircraft.

Choice route: Doha to Paris — A380s were assembled in France, so returning on a superjumbo to where it all began seems appropriate

Qantas has 12 A380s in its fleet, and they originally weren’t estimated to return to service until 2023. However in August 2021, the Aussie airline confirmed that five of its A380s would recommence flying sooner than expected.

Superjumbos are set to operate Qantas’ Sydney-Los Angeles route from July 2022, and from November 2022 they should be crisscrossing between Sydney and London via Singapore.

“The A380s work well on these long-haul routes when there’s sufficient demand, and the high vaccination rates in both markets would underpin this,” read a Qantas statement.

While two of Qantas’ A380s are set to be retired, the remaining 10 should all be back in service with newly fitted interiors by early 2024, according to the airline’s statement, which said timing would be “dependent on how quickly the market recovers.”

Announcing the 2022 A380 return, Qantas Group CEO Alan Joyce said the decision was made because the UK and US were “key markets for Qantas” before the pandemic, and seem to be recovering well.

“We expect travel demand on these routes to be strong enough for the A380,” he added.

“The A380 is a great aircraft that our passengers love. The 10 aircraft we’re bringing back will have all-new interiors and we expect them to be part of our fleet for many years to come,” said Joyce.

Korean Air is currently operating an A380 service between Incheon and Guangzhou.

While Korean Air’s A380s aren’t currently flying to New York’s JFK Airport or Paris’ Charles de Gaulle, two of the aircraft’s former haunts, the Korean Air spoksperson confirmed that the airline is currently operating the A380 from Incheon to China’s Guangzhou Baiyun International Airport once a week.

Guangzhou is also a hub for China Southern Airlines, which has five A380s. The Chinese airline is currently flying superjumbos between Melbourne and Guangzhou weekly, as well as on some flights to and from Los Angeles, according to FlightAware.com.

Korean Air is in the middle of merging with Asiana Airlines, an airline with six A380s of its own.

The Korean Air spokesperson pointed CNN Travel to a recent interview with FlightGlobal in which Korean Air’s Chairman Walter Cho said “the A380s will be leaving Korean Air’s fleet within five years.”

Korean Air’s A380s days might be numbered, but they’re still around for now.

Choice route: Incheon to Guangzhou — experience Korean Air’s A380s while you can

Japanese airline All Nippon Airways (ANA) premiered its first A380 in 2019. Another superjumbo followed a couple months later, and from October 16, ANA will have three A380s in its fleet when a third “Flying Honu” joins its line-up.

All Nippon Airways’ A380s are perhaps the world’s most distinctive superjumbos, each painted in vibrant hues to resemble Hawaiian sea turtles, a nod to their flight route from Tokyo Narita, Japan to Honolulu, Hawaii. “Honu” is a term used for sea turtles in Hawaii.

An All Nippon Airways spokesperson told CNN Travel that while its A380s aren’t currently flying to Hawaii on a regular basis — there’s a Boeing 747 doing that route right now — the airline is “looking for opportunities to fly the A380 on the Narita – Honolulu route on limited peak season days.” In August, an All Nippon Airways’ A380 flew from Narita to Honolulu on two roundtrips.

ANA’s A380s have also been flying domestic charter flights — so-called “flights to nowhere” — and they’ve been used as pop-up restaurants.

ANA told CNN Travel it’s “closely monitoring demand as well as immigration guidelines and public health measures implemented by the respective government” in order to work out when the A380 can return on a more regular basis.

Choice route: Tokyo to Honolulu — keep an eye out for any announcements and head to Hawaii in the jazziest A380 around

Frontier Airlines gets rid of telephone customer service
Discover USA: North Dakota
Why Your Next City Break Should Be Toronto, Canada
10 Coolest Winter Places in America
Unusual Pairings In Mexico: Sparkling Wine And Sherry With Baked Crickets And Worms