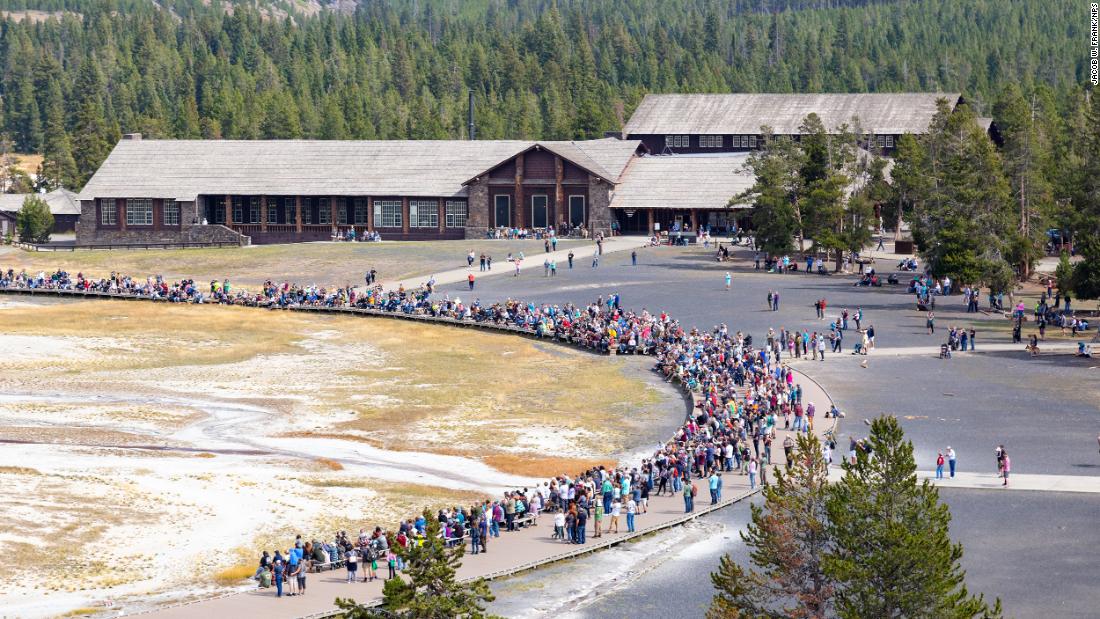 Editor’s Note — This story provides updated numbers released by the National Park Service on October 14. The NPS said it undercounted visitors at one entrance.

Perhaps even more notable is the record number of visitors year-to-date.

It’s the first time the park has exceeded the 4-million-visitor mark this early in the year, even before the pandemic, NPS said.

“Never in Yellowstone’s history have we seen such substantial visitation increases in such a short amount of time,” said Superintendent Cam Sholly in the news release.

“We will continue working with our teams and partners to develop and implement appropriate short- and long-term actions for managing increasing visitation across the park.”

An influx of visitors is forcing Arches National Park in Utah to temporarily shut its gates almost daily. And disappointed visitors aren’t the only consequence of overcrowding. The National Park Service is anticipating one of its busiest summers on record, so Arches won’t be the only popular park where crowds could be an issue. CNN’s Lucy Kafanov reports.

This announcement comes as no surprise to people who have been part of the huge waves trying to gain entrance to popular national parks for months now.

Even into October, Arches still warns potential visitors that “parking lots at trailheads may fill before 9 a.m., causing the park to temporarily restrict access until congestion lessens.” Its website said restricted access can last from three to five hours.

Lots of people, lots of wildlife

You shouldn’t count on the crowds thinning out too much for autumn in national parks, the NPS has previously warned, as people are flocking to outdoor spaces after so much time cooped up indoors during the pandemic.

If you plan to enjoy Yellowstone, the NPS advises making plans well ahead of time and be ready share the space with other travelers.

More people means more potential wildlife encounters gone bad, too. The NPS says keep a minimum of 25 yards (23 meters) from all wildlife and 100 yards (91 meters) from bears and wolves.

NPS takes this warning seriously. Last week, a 25-year-old woman was sentenced to four days in federal custody and steep fines for staying too close to a grizzly bear and her cubs.

You also need to be ready for all kinds of weather at Yellowstone this time of year. After all, it’s located in northwestern Wyoming and reaches into a bit of Idaho and Montana.

NPS says “snow is common in the spring and fall with regular accumulations of 12 inches.”

in fact, at 6:45 p.m. local time Wednesday, the temperature at the park was a shocking 20 degrees Fahrenheit (almost -7 Celsius).

Antibiotics Use In Farm Animals Is Growing—Here’s Why It Could Pose A Danger To Humans
Fungi-Powered Ingredients Startup Michroma Promising To Remove Petroleum From Food Colorings Raises $6.4 Million In Venture Funding
As Tequila Takes On Global Ambitions, 818’s Mike Novy Weighs In On The Category’s Major Moves
After a catastrophic break-up I travelled the world solo – here’s what I learnt
Valentine’s Day Gift Guide: The Best Italian Gifts For Pasta Lovers