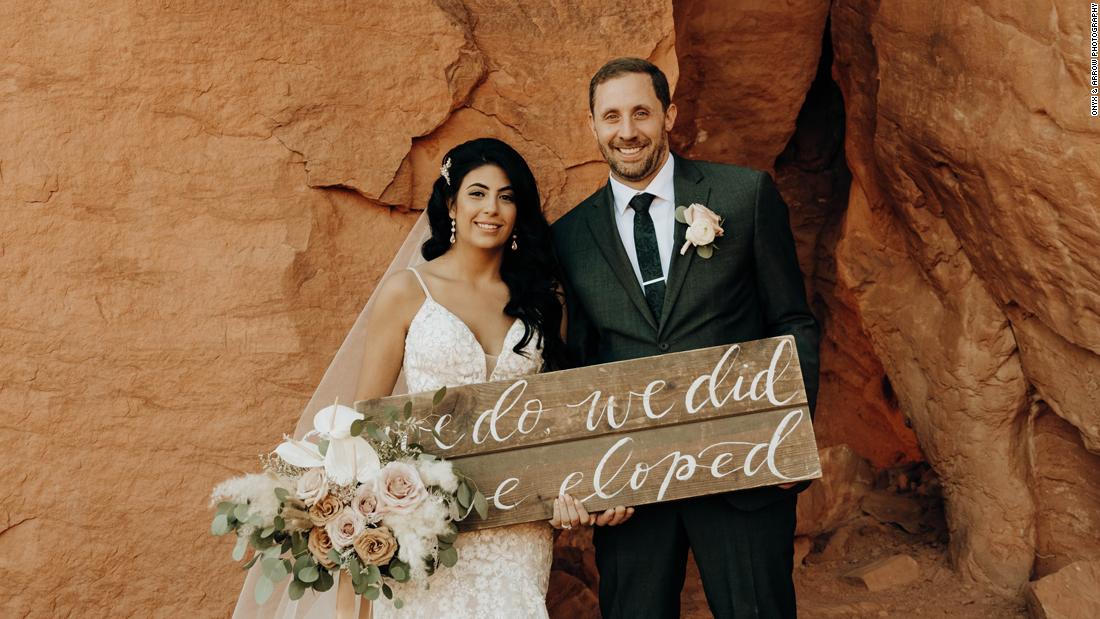 Kimberli Romano and Kyle Hlavaty live in Chicago, along with most of her family. The couple flew to Las Vegas for their weekend wedding on Wednesday, October 6, and didn’t have any issues.

A bridesmaid’s flight was delayed Friday. But it wasn’t until Saturday morning, the day before the wedding, that the couple became concerned Romano’s parents wouldn’t make it.

Hlavaty’s friend was supposed to be on the same flight as Romano’s parents from Chicago Midway International Airport. He called to tell the couple his flight had been canceled, and he didn’t know what was going on because he was still on hold with customer service.

“So, I call my parents immediately and told them double-check everything because we just got notification that the flight was canceled,” she said. “And, of course, it turns out that it was, and I was freaking out. I was so emotional.

“That was probably one of the most difficult things I’ve ever had to do was to get married without my parents.”

Southwest said a number of issues caused the weekend cancellations, including bad weather and a brief problem at the Air Traffic Control center in Jacksonville, Florida. Those problems caused minimal disruptions at other airlines, and Southwest admitted to employees Monday that things cascaded out of control because it lacks adequate staffing.

CNN has reached out to Southwest Airlines for comment.

Romano and Hlavaty got engaged October 2019. The couple started planning right away for an October 2021 wedding, and it was originally supposed to be near Chicago.

With everything being so fluid due to the pandemic, the couple rethought their plans in March 2020 and opted for a smaller ceremony with 18 guests in Overton, Nevada, about 60 miles east of Las Vegas.

Romano’s family looked at flying into neighboring airports in Phoenix, Los Angeles and San Diego — anything that would get them in the general vicinity, but to no avail.

“Everyone was scrambling. Kyle and I were scrambling to try to find flights. We obviously couldn’t get anyone on the phone. We actually went to the Las Vegas airport to try to talk to an agent to see what we could do.

“It’s unbearable for a lot of people,” she said. “And it’s very, very disappointing. I’ve defended Southwest for so long and been a loyal customer of theirs for so long, and the way we were treated at the airport — they were so rude and disrespectful and had absolutely no remorse for anything. It’s very upsetting.”

Romano was able to get her parents on a scheduled flight out of Milwaukee for Sunday morning at 6 but learned at midnight that even that flight had been canceled, as well.

Apart from Hlavaty’s mom and aunt, who had flown to Las Vegas earlier in the week, the couple didn’t have any family present. Her parents watched via FaceTime as their daughter walked down the aisle.

“Service was spotty because we were up in the mountains and everything, but my mom said that she was able to see most of it,” Romano said. “She couldn’t hear anything but she could see most of it.”

The couple considered postponing the wedding, but her parents encouraged them to continue.

“We were back and forth on it about what to do,” she said. “But then, this was what we were working so hard for. This is what we had saved for so long for.”

Not having her family present on her wedding way was heartbreaking for Romano. The newlyweds plan to celebrate again when they return from their honeymoon, but she said it won’t be the same.

“There’s honestly nothing that they (Southwest Airlines) can do that’s going to make up for what’s already been lost, what’s been taken from me, essentially,” she said. “You know, those are memories that can’t be replaced by just having another.”

She still wants an apology.

“I’m sure that I’m not the only person who’s been hugely inconvenienced by what happened over the weekend,” she said. “I’m looking for a sincere apology more so than anything else. Money’s money. Money doesn’t bring memories back.”

The pair are in California right now and have plans to make their way back to Chicago by car next Tuesday.

Why now is the best time to book your next ski trip
Champagne Charlie Is Back, 37 Years On, At $700 A Pop
Forget the Eiffel Tower. Here’s where the French travel in France
Europe wants a high speed rail network to replace airplanes
How to spend a weekend in Suffolk