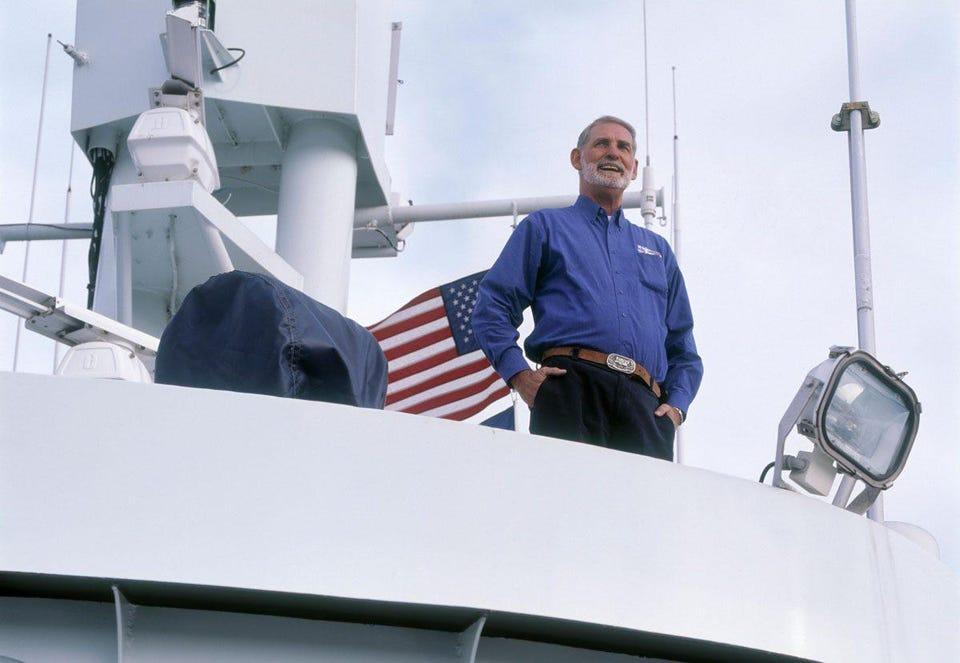 Chuck Bundrant, the titan of the fishing industry who commercialized pollock at fast food chains around the world and spent six decades trawling northern seas, died on Sunday at the age of 79.

Bundrant quietly ran America’s largest seafood company, Trident Seafoods, from Seattle, with a fleet of 40 vessels and 16 processing plants, mainly in the Pacific Northwest. Trident Seafoods has grown to employ some 5,000 during peak season in Alaska. Forbes estimates sales of the closely held private company at roughly $2 billion. Bundrant, who fought Parkinson’s disease for the past decade, had a fortune worth at least $1.3 billion when he died, Forbes estimates.

Bundrant, who was born in Tennessee, started fishing Alaskan waters in 1961. That’s when he left college after one semester and drove a 1953 Ford station wagon with three buddies from Middle State Tennessee University to Seattle, arriving with $80 in his pocket. Having grown up wanting to be a veterinarian, the 19-year-old found himself falling in love with the docks while working for a fish processor. Instead of going back to school, he made his way to Alaska by winter, where he worked on a commercial crabbing boat. He eventually became captain of the ship.

In 1973, Bundrant cofounded Trident Seafoods with two crab fishermen in Alaska. They created the 135-foot Bilikin, the first fishing boat with on-board crab cookers and freezing equipment. By the 1980s, competition for certain fish peaked.

Alaskan pollock, a bottom-feeder that chefs considered a so-called trash fish, became Bundrant’s goldmine. His first break came when the Long John Silver’s signed a multi million-dollar deal in 1981. That same year, Trident built a fish-processing plant in Akutan, Alaska, what became it’s outer-most operations. Trident then became the main supplier to national fast food chains, including McDonald’s and Burger King, because Bundrant sold pollock cheaper than the cod they were used to buying.

Bundrant also played politics to his advantage over the decades. In 1998 Trident and other fishing companies pushed Congress to pass a bill that limited foreign fishing outfits from working in U.S. waters by requiring 75% American ownership for companies fishing in the Pacific Ocean within 200 miles offshore. Bundrant was one of the bill’s architects.

“Chuck saw all these foreign fishing firms and said ‘I want a piece of that’ at the time when no one was looking at these fisheries,” recalls Brent Paine, the executive director of trade group United Catcher Boats who has fished in Alaska and lobbied for the industry for decades alongside Bundrant.

The resulting political spectacle saw Stevens, who was chair of the appropriations committee at the time, decommission around a dozen offshore trawler boats owned by foreign companies and stripped them at the shipyards. According to Paine, Bundrant’s “pipeline to these key staffers” on Capitol Hill even led Stevens to earmark $3.5 million for an airport built on Akutan Island, so that seasonal Trident workers could fly closer to the plant where they work, instead of having to take an hours-long ferry ride. It opened in 2012 at a cost to the government of $54 million.

The next year, in 2013, Bundrant’s son Joe took over as CEO. In addition to Joe, Bundrant is survived by his wife, Diane, daughter Jill Dulcich, daughter Julie Bundrant Rhodes, and their families, including 13 grandchildren and five great-grandchildren.

“This company, no matter what size it is, it’s going to still be a close family,” Bundrant once said. “That is the key to Trident’s success.”

Holiday Gift Guide 2022: The Best Kitchen Gifts For Food Lovers
Cost Of Thanksgiving Dinner Rises By 20 Percent In 2022 [Infographic]
The best accommodation in Ischgl
The best London hotels with gardens
Blind Tasting Wine With The Most Famous Wine Consultant In The World